I came across an article recently on a blog by The Humbled Homemaker
which I just so related too. 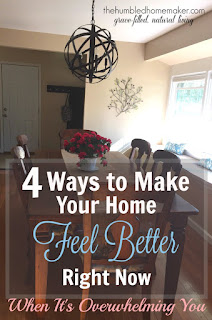 I'm not a perfect homemaker - I'm far from it.  I don't enjoy cleaning but I enjoy a clean home.  It seems like as our family has progressed, it's gotten more difficult to keep up with the every day tasks.  When I was single, my house not only looked clean, it smelled clean.  It was easy to keep up with everything and I always felt like my apartment was a haven.  Then, I got married HA!  It started out "good".  Our first apartment was tiny and easy to keep up with and our second apartment was brand new with two bedrooms and two bathrooms - it was nice to have the space and with both Darryl and I working to clean it, it was easy to keep that "haven" feeling.  Buying a home added a new deminsion.  The good thing was that it was just the two of us and we had TONS of space.  We even had an empty room and the basement - next to nothing was down there!  Eventually kids came into the mix followed by "stuff".  Somewhere along the way, it's because almost difficult to move in our home at times with the stuff that ends up everywhere and along those same lines I find it difficult to want to keep things up because it takes so much work to organize everything.  In reality, it usually comes down to discipline and, well, money.  I have lots of great ideas on how to organize stuff so it will stay that way but, I work to not spend money on additional storage items which means my ideas are on hold.  Now, this isn't a "woe is me" post at all because we made the decision for me to stay home with the kids, which is the best decision ever, but it also meant we had to tighten our belts and let some things go.  Anyway, all of that to say, this article almost comes straight from my mind (if only I could write like that!) and I really like the ideas that she gives.  Some I've done and some I'm working on but it is nice to know that I'm not the only one!

Email ThisBlogThis!Share to TwitterShare to FacebookShare to Pinterest
Labels: Making Your Home a Haven