Food Friday - A Favorite and a Not Favorite 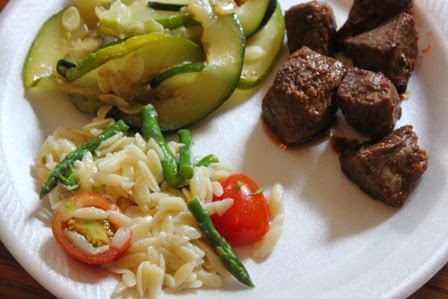 We had this for dinner recently.  Two of the three items are family favorites.  First up, the meat.  That was leftover from camping that we did not cook.  We always love steak kabobs cooked over for the fire but we found that with kids, it just didn't work.  Instead, I threw them in a skillet and cooked them up - they were fantastic!  They had marinated in Sweet Baby Ray's Steahouse Marinade YUM!.  Second, the zucchini (from our garden!) is cooked just the way we like it - in a little butter with nature's seasoning sauted until soft and tasty.

The other item - that Orzo salad?  Yuck.  HA!  That was a recipe I planned to share but it just wasn't good. I like aspargus when it is roasted but just blanched?  Not great flavor.  The tomatoes ended up being bitter/sour - they were a gift from someone's garden so I don't know what happened to them.  I won't make that again though!

Nothing super exciting as far as cooking here lately!  Seems like we have been eating a little more simple OR the recipes are not note worthy!
Posted by Jackie Koll at 7:00 AM No comments: