Camping is all about food; well at least a large part of it seems to be about food!  Over they years, we have kind of perfected our camp food especially since we generally only camp for two nights.  Well, we THOUGHT we had it all perfected until our most recent trip when we did everything completely differently.

This time around I tried to plan food for less eating out but that totally backfired HA!  Listed below were our plans and what we really did!

Friday:
The plan: I precooked Brats to take with us and planned to roast Hot Dogs and Brats over the fire.  I had also made Potato Salad and a new recipe for Macaroni Salad (not our favorite so I won't be sharing).  Plus there were chips and stuff for S'mores too.
The Reality: 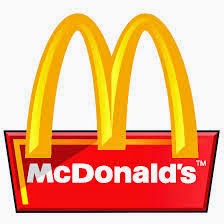 Yep, McDonald's.  I mentioned this already but, well laid plans of mice and men do not always work out well.  We arrived about an hour later than we planned and then, it took us almost 3 hours to set up camp so by the time we were done we were STARVING and STILL had to get wood, start a fire and let it get hot enough to cook.  Thankfully those Golden Arches are all of 10 minutes away so we enjoyed a relaxing dinner there instead. 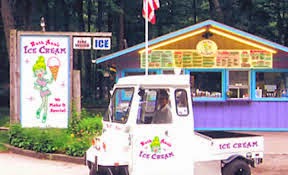 After stopping to get wood on our way back to camp, the boys asked for Ice Cream so we stopped at our traditional ice cream place and all got a cone.

For the record, once we got the stubborn fire going (we had some pretty wet wood which we don't usually get from "our" great wood guy) we did roast a few marshmallows for S'mores before the night was done.

Saturday:
Breakfast - The Plan - We love cooking breakfast at the campground.  Thanks to an electric skillet and a simple toaster, breakfast is wonderful.  We had bacon, eggs, bagels, and fruit.  Other than the cream cheese being frozen thanks to me putting it under the little freezer in the little fridge we have (it came with the camper!) the "Plan" is exactly what we ate! We love Bernie O's pizza in North Muskegon and we always plan to eat one meal there. Often we eat dinner there on Friday evening but opted for Lunch this time.  It was as good as always and, like always, we ordered too much food.  I think we finally have it figured out though - One small order of breadsticks (mostly for Nate since he isn't a fan of pizza), 1 small pizza for Josh with just cheese (it's like $3.99 - that's not bad and he eats the whole thing) and a pizza for Darryl and I.  :-)  So, yes, the plan is exactly what we ate for lunch

Dinner - The Plan -  Our normal Saturday evening dinner has almost always been steak kabobs that have been marinated all day, Fried Zucchini and the salads that I always make to bring with us.  That did not happen this year.  We had gone to the beach during the afternoon (which was a BLAST).  By the time we got home and I got the boys and I through the shower (which was like a sauna room made worse by a 90 degree day with humidity) I was well beyond over heated and needed to lay in front of the fan for awhile.  Darryl got a very stubborn fire going again but by that time the last thing I wanted to do is really cook. 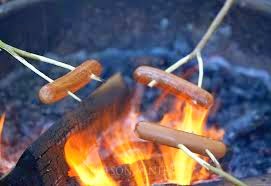 Josh asked to roast hot dogs over the fire so that is exactly what we did - the boys and Darryl had a hot dog and I had left over pizza :-)  Throw in the salads and chips and we were good.  I will admit that this time frame of our camping day we got a little discouraged.  Darryl and I realized that one of the things we love about camping is taking off for part of the day Saturday and exploring the area.  So yes, we got a little bit bored but then we decided to go for drive and get ice cream again, see the sun setting over the lake and just get away for a bit and that was all we needed.  We came back to camp and had so much for fun over the next few hours with the boys until they literally crashed!

Sunday
The Plan - Breakfast - I like to keep breakfast simple on the last day and that is exactly what we did.  It was just cereal, bagels, fruit, and donuts.  On our outing to the store on Saturday after pizza, the boys picked out donuts.

The Plan - Lunch - Our plan was to stop at fast food after loading up and heading home and that is exactly what we did.  Taco Bell never tasted so good after being so hot from tearing everything down!

We did take snacks - chips, crackers, fruit, popcorn and more - way too much HA!  I'll pack a little differently next time and take less food but, hey, at least we never went hungry!