A week or so ago, I posted about our Summer Binder which holds lots of ideas and plans for this summer.  We have officially finished our first week and I wanted to share what we did!

We had originally planned to start on June 1st but it was pouring rain here on that day so I just pushed everything up to Monday.

1) Monday - We planted our Sunflowers that we were going to plant on Friday and then we planted some veggies that we had picked out on Sunday.  I had originally planned to do some carrots in a bottle but instead, we just planted the carrot seeds in our little garden area. 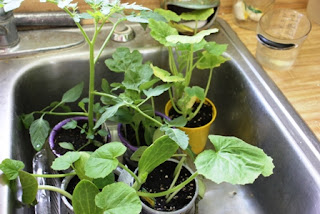 Here are our plants - 1 Cherry Tomato, 1 Zucchini,  1 Cucumber, 1 Pumpkin and 1 Watermelon.  I realized after I planted them that all but one of them is a "vine" LOL  I told my husband he might not have to mow once they start growing!  I picked Cucumber because I love fresh "pickles"; zucchini because we love fried zucchini in the summer, cherry tomatoes because the boys love to pick (and squish) them, pumpkin, well, because I though it would be fun for the boys to see them grow and watermelon because Josh loves "Waterlemon". 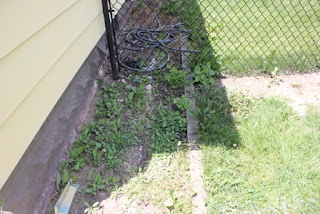 Here is our little garden spot - same spot as last year.  The first thing we had to do was weed it and get it ready to plant. 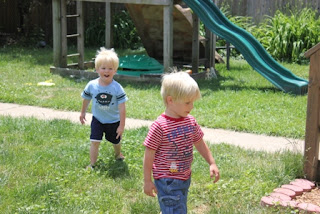 Here come my helpers.  I didn't even tell them I was coming outside but it didn't take long until I heard "MOM where are you??" :-) 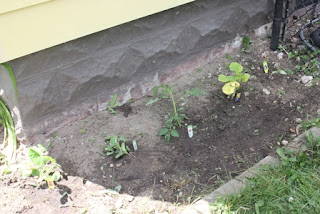 Besides the plants you see, we also planted those carrot seeds and sunflower seeds.  We'll see if they pop up.  The funny thing is after we planted the Sunflowers (or Trees as Josh calls them), Josh kept going outside to see if they had grown yet.  I can't wait until they start to pop up!

2) Tuesday - We made homemade lemonade.  I found this Recipe and cut it in half . . .well kinda. 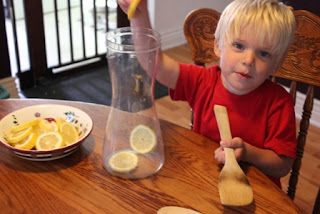 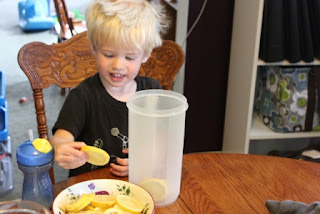 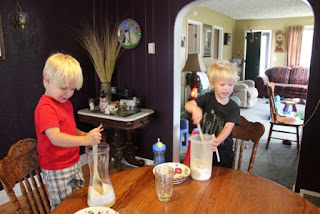 They pounded and they pounded . .. and then I poured it all into two big bowls and they were able to really pound those lemons. 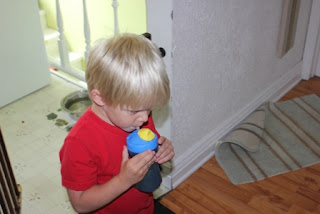 Then we drank some - I think we'll do this again this summer but measure out the right amount of sugar!  The boys really enjoyed making their favorite drink.

3 and 4)  Wednesday and Thursday were all about Strawberries.  On Wednesday, I loaded the boys up and we drove to the local Strawberry Farm to "pick" berries.  Now, I'm no dummy.  There are other people who enjoy bending over Strawberry plants and finding those yummy berries but I am not one of them.  Instead, we went to the farm stand and I let the boys pick out a flat of strawberries.  Let me tell you, I had to move fast.  I have never seen three little boys grab strawberries so fast!!!  We picked out our flat and, before I could pay for it, the boys all had strawberries in their hands and mouths.  Crazy kids :-)  Oh, and Josh informed me on the way home that he didn't not need sandwiches anymore for lunch, he would just eat berries HA.  On Thursday, I made Strawberry Jam and Strawberry Syrup.  The boys helped a little by picking out strawberries for me and putting them in the bowl to mash. 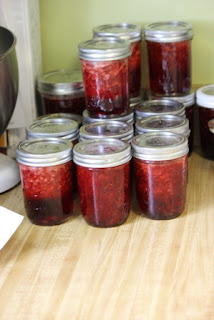 At dinner that night, I made yeast rolls and we all enjoyed fresh strawberry jam on those rolls  . .. well actually, the boys just ate it off their fingers.  Darryl and I enjoyed some strawberry syrup on vanilla ice cream for a snack.  It was yummy!

5) Friday - ok, I slacked.  I had planned to either make or get a bird house/bird seed.  It just didn't happen.  They seem to be a little  pricey!  BUT, the boys have discovered a birds nest in our tree, Crabby.  (Yes, we name our trees).  So they, with their dad, explored that - looking for any babies (they are gone) and talking about who lives there.  I keep seeing the boys walk over to the tree.  Josh even took the Munchkin over there to show him the birds nest.  I think that is a better success story then the bird houses any day!

I count our first week as a huge success.  It really wasn't that much "work" - I wrote down time for the activity each day in my planner to make sure that I accomplished the goal.  I think it really helps the boys to have something special to do each day!
Posted by Jackie Koll at 8:00 AM 3 comments: