For years I've wanted to make cookie trays.  When I was single and taught school I always wanted to make a tray of cookies to bring into the break room but, with parties to plan and Christmas cantatas at church, it just never happened.  Then, when I was working at the bank after Darryl and I got married, every year I planned to bake so I could take in treats.  Well, that never happened either.  I didn't feel like spending a whole day baking.  Finally, this year, I planned ahead, picked out my recipes and even started picking up extra baking staples like flour and sugar starting a few months ago.  I started baking on Monday, the 12th and tried to do 2 cookies a day through Thursday.  I had one EPIC fail.  I found a recipe on Food Network for Peppermint Pinwheels.  They took a ton of work and they were absolutely awful.  They had no flavor and were hard as rocks.  Josh tried one and said "Oh no, mama, this is way to hard" HA!  I only cooked one batch and ended up throwing the dough away it was so bad.  As I made the cookies, I let them cook and then put them in the freezer - saving the ones that wouldn't freeze well until Thursday so they would be fresh to pass out on Friday.

Who did we bless with cookies?  This year, we gave a plate of cookies to our three "connecting" neighbors.  We live on a corner lot so we gave cookies to the three houses that "connect" to us (and we actually talk to those neighbors HA!)  It was fun because one is an older gentleman who lives alone, the second is two single guys (who are actually two of the best neighbors ever!), and a family of three who are super nice.  Then, I also sent a tray of cookies with Darryl to put in his office at work.   The rest are for us and I also froze some to take to my parents for Christmas Eve :-)

Now, doesn't that all sound wonderful?  Well here is real life. I had grand plans didn't I?  I'd love to show you cookie trays all tied up pretty, ready to hand out and photos of us knocking on the neighbors doors but, like I said, this is real life so check out where the cookies are right now: 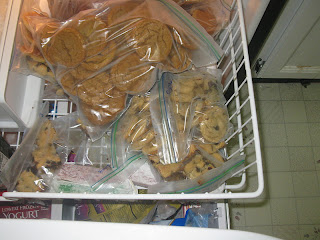 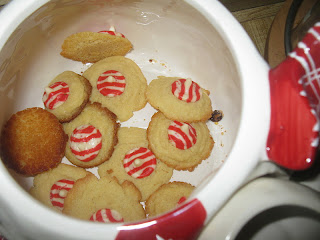 Yes Ma'am, thank you sam, they are in my freezer and cookie jar.  What happened?  Well, let me tell you.  Besides the epic fail I mentioned above, I had another batch that did not turn out because the shortbread base overcooked and, those cute kiss cookies, well, they taste good but man, are they ugly LOL  Added to that, I tried to do all of this cookie baking the same week as getting ready for a birthday party and Christmas celebration and I just chalked it up  as a learning experience and now, I don't have to bake for a few weeks :-)

At least I'm one step closer to making cookie trays.  I'm creating a "tickler" list that is labeled "Christmas in June".  I will be pulling out my Christmas plans in June so I can start testing and mastering cookie and candy recipes and budget for things like buying more lights and cookie trays :-)

I also saw an idea recently where you make cookie dough and freeze it and deliver that to the neighbors to cook when they want but, does that look like I'm not doing the work and passing it off on them?  Maybe do some cooked cookies and some frozen so they can cook some after the holidays?  I'm just not sure! I guess I have a few months to decide :-)
Posted by Jackie Koll at 10:00 AM 1 comment: