On Saturday, the 21st, we got our first snow storm of the season.  I had plans on Saturday that had to be cancelled but it ended up being a wonderful family day instead.

We hung out at home, the boys played outside in the snow, and we watched football.  Plus, we introduced something new to the boys.  Almost two years ago, someone gave us a Wii.  After checking it out while the boys were gone one weekend, we decided that they were not old enough to handle the Wii yet plus they were content with the Game Cube.  Well, Darryl pulled it out on Saturday and got it set up and now, we have two boys who are loving it!  Bowling, Golf, Baseball and more.  Shoot, we only introduced them to one game HA!

I didn't take many photos but here are two photos of the snow - it really was beautiful! 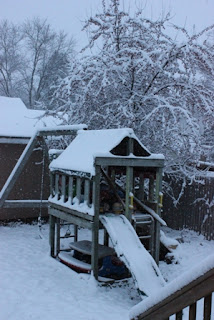 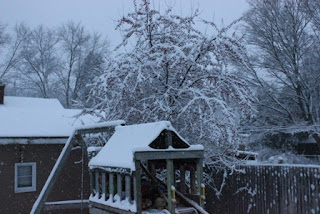