For those of you who have read through my posts, you will have read my list of books that I want to read over the next 5 months.  The first one on the list was "Along the Infant Way" by Ezzo and Ezzo.  This is a book that was given to me when Josh was born but I had not fully ready it (I skipped to the bones and forgot the rest)  I really wanted to read it in order to be able to discuss it when other people spoke about it.

I would give this book a "C".  I think the authors have some really good ideas when they talk about the importance of scheduling with your newborn/children.  I believe that a schedule set by the parent is so much better for everyone than one set by the children.  But I do feel he takes it a little too far.  He talks about not rocking your children to sleep; well, I must confess we rock our kids.  Now, Josh is old enough that he really wants to go to his bed to sleep but he enjoys that 15 mintues after his bath in the recliner with his dad.  But Nate still gets that last bottle with the rocking and normally falls asleep.  That is something I wouldn't give up no matter what author told me too :-)  Another thing with this book just as an FYI - he speaks a lot to women who choose to nurse.  Early on he states that it doesn't matter whether you bottle feed or nurse but throughout the rest of the book he gives most examples based on a nursing mom.  From someone who bottle fed, I skipped many sections in the book because they didn't apply.

Should you read it - sure; but read it with a grain of salt (as you should with any book!)  Take away the truths that you can really use and throw the rest out :-)

That's just my humble opinion.
Posted by Jackie Koll at 3:28 PM No comments:

Email ThisBlogThis!Share to TwitterShare to FacebookShare to Pinterest
Labels: Books 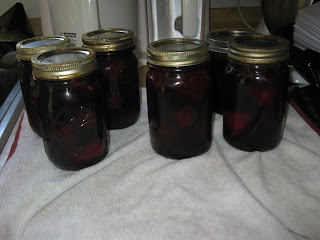 My picture of the day is my beets :-)  Yep - they are canned!  It was actually super easy.  It only took me a total of about 30 minutes to get them peeled after cooking them; If I could have done it all at once (instead of in 15 minute increments in order to keep the kids entertained too) I think I could have down all of it in about 1 hour and a half with that last half hour was just the second batch in the hot water bath so it wasn't really work.  ALl the lids popped so now I"ll wait a few days and than try them . .. hopefully they taste good ;-)
Posted by Jackie Koll at 3:14 PM 1 comment: