"The Love of the Lord Endures

This weeks song is "The Love of the Lord Endures" by Joy Williams.  Several years ago, I drove to the Detroit area for a wedding of a dear friend.  I had a small part in the wedding so I went over for the rehearsal and stayed the night by myself since Darryl had to work.  On the way home, I heard this song and fell in love with it.  As soon as I got home, I looked it up and ordered the Soundtrack so I could sing it.  It was over a year later before I had that chance.  It wasn't long after I got the Soundtrack that we found out we were expecting Joshua and than I went on bedrest for the last 17 weeks of that pregnancy.  I continued to practice it though and it eventually became "Josh's" song.  Why?  Because at 13 weeks old, he was struggling to go to sleep . . so I held him close, sang a a few lullaby's to him and finally sang this at the top of my lungs over and over until he fell asleep.  The next night, I sang some lullaby's and than sang this . . twice and he was out.  That became our routine - I would sing a full misc. songs and end with this - often he was out before I hit the last chorus.  When I was finally able to sing at church again, I was practicing this song while Josh was in his jumparoo - he stop jumping as soon as I started singing and just sat there and listened - smiling the whole time.  It was too cute!!!

Beyond the cute memories, this song has some powerful words:

The verses:
In all that I have found,
Your evidence abounds
I've always sensed your fingerprints
If I just look around

Life has let me down
In wealth, joy can't be found
I've searched for peace in all of these
But I have always found . ..

Even though it has been at least a year since I sang this song, I still find myself humming the tune or singing in the words and it is one that I keep "in my back pocket" always ready to go.

I hope you enjoy it :-)  It is currently # 1 on my player; I wish it was a better recording but I think you'll get the idea.
Posted by Jackie Koll at 8:31 PM No comments:

One of the "events" we've been waiting for with our boys is for them to actually start to play together.  That is one of the many nice things about them being so close.  The playing together has not been going well - Josh likes to play his way, and Nate . . well Nate just doesn't understand what Josh expects.  Today however, I saw a this: 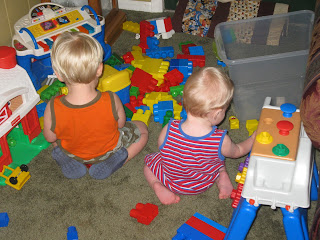 Yep, they are playing legos together.  Josh also played hide and seek with Nate today - he would hide wherever, behind a basket, around a corner, and when Nate would start coming toward him, he would stick his head out and just start laughing which in turn made Nate laugh.  No, it isn't perfect yet because Josh still likes the game to be played HIS way and if Nate doesn't follow those secret "instructions", he gets a gentle push and tumbles over (yes, we are working on this!) But I couldn't resist this picture as the picture of the day!!
Posted by Jackie Koll at 7:50 PM 1 comment: