Happenings in this House! This was a week of weather!  The beginning of the week was so very hot!  We did a lot of nothing!  On Tuesday night, a huge storm came through - this pictures show the front edge of the storm as it came over top of our house.  I was on "storm watch" since this happened after the rest of the family went to bed.  A cold front finally moved in on Wednesday evening (after another storm!).  Such relief! 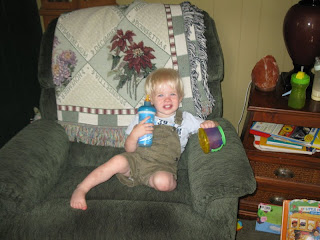 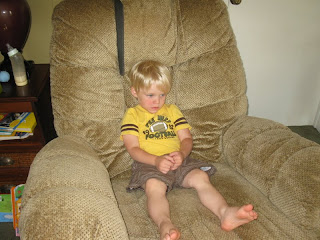 The boys just chilling out.  We watched a lot of cartoons on Monday and Tuesday!! 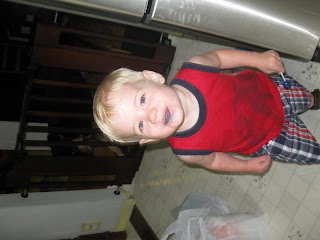 On Thursday, both boys got haircuts . . . . and suckers.  Notice those blue lips?? Gotta love blueberry dum-dums :-) 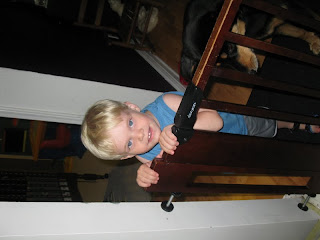 Such a cutie!  The boys were in sorry needs of those said haircuts and look so much better now! 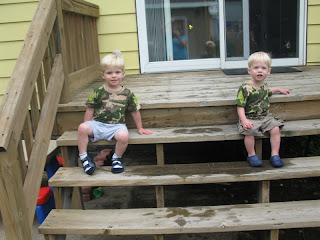 The boys are waiting for Papa!!!  From the time Josh got up on Friday, all I heard was "Papa? Papa?"  I told him Papa would be coming after lunch to which he replied, "Pizza, Papa?" LOL  Both boys were thrilled when Papa and Grandma arrived  - so much so, that I no longer existed!  They actually went home with the grandparents and are there for a nice long weekend! 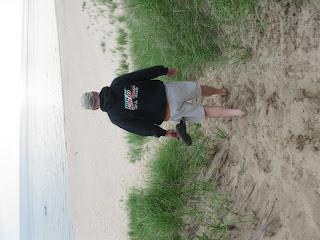 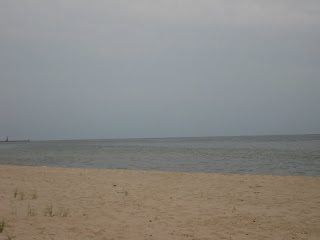 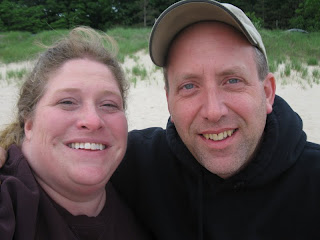 Without Kids, we are enjoying some great time together!  On Saturday, we took time to completely clean out the garage.  We also did a few other small projects including scrounging up all of our pop cans so we could turn those in and, if you can believe it, have enough money from that to pick up the last few hinges we need to hang the cabinets in the kitchen (which will get done today or tomorrow!) before heading out on a date night.  We started out with dinner at Red Lobster (which we love plus we even had a gift certificate to help us out a little.)  From there, we drove to Muskegon to visit the beach.  If you know me at all, you know that I love the beach - it is a pipe dream of mine to own a cottage on Lake Michigan . . I will settle for a nice lake even . . .I want to watch the storm come in over the lake . . and see the ice cold frozen water.  I just love it.  We don't get out to the beach often right now so this was just a wonderful thing!  Yes, it was a little chilly but we sat in the sand and just watched the water for awhile before heading to "our" ice cream place at the Campground. 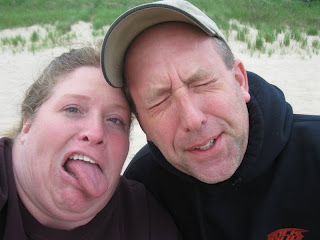 :-)  We have a thing about taking pictures  . .. and Darryl makes weird faces so I joined in.  This is one of the "worst" ones LOL 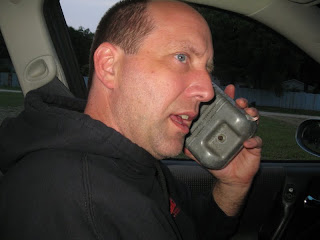 Finally, we ended our night by going to the drive-in!  We LOVE the drive-in movie theatre.  They even still have the old working speakers (or can tune your radio to the station instead.  We saw Mr. Popper's Penguins (which is a cute movie) but mostly just enjoyed being out together.  We very much look forward to taking our boys to the drive-in and building memories with them - Darryl has great memories of going to the drive-in as a kid, dressed in in PJ's and enjoying popcorn.
So, those are the basics of our week!  Hope you enjoyed your week as much as we did ours!
Posted by Jackie Koll at 12:51 PM No comments:

There is NOTHING my heart yearns for more than my sons' salvations. To quote from the eBook:

"Day after day you will parent, intentionally seeking the heart of your son. But until the King of
kings and Lord of lords turns his heart of stone to a heart of flesh, your son's actions will be
motivated by what is pleasing to him, rather than what is pleasing to the Lord."
p. 15

Everything hinges on this. Oh, we can pray for protection, good friends and influences and positive, fruit-bearing
experiences for our sons along the way. But until their hearts submit to Jesus they will continue to choose
themselves and their own way.
Elyse Fitzpatrick, in her book entitled,
Give Them Grace: Dazzling Your Kids with the Love of Jesus, says

“There is no easy way to say it, but it must be said: parents and churches are not passing on a robust Christian
faith and an accompanying commitment to the church.”
Take a moment today to look long and hard at your parenting. Is it Gospel-centered, or have you allowed the
world's “stinking thinking” to creep into your home?

"Because, if you confess with your mouth that Jesus is Lord and believe in your heart that God

I have been personally praying for this very thing for my boys since before they were born and it is a constant burdon on my heart.

Today take time to pray the 10 prayers located in the Salvation chapter!