I "found" this post in my drafts - I wrote it back in January but due to lacking "Joy", I didn't feel like posting it at the time.  As I reread it earlier this week, I realized that it's good.  I've come further in my "Joy" journey since January but I think it is also good to reflect on where we have been to see how far we've come.

This past year brought events that stole my joy.  I believe that when you go through a life changing event you have to re-learn how to live a life you had prior to that event.  There is always a "before" and an "after"; a clear line in the sand.  As I came to the end of 2016, one of the conscience decisions I made was to work on choosing Joy throughout 2017. 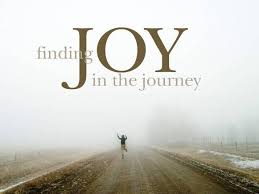 In my "book" Joy and Happiness are two seperate things.  I have learned to laugh again and to find humor in things I hear and see.  I've slowly been able to sing again (granted some of those long praise songs - they wear me out about half way through and I'm done!).  The joy in my heart, though, is not there.  There is still sorrow and grief that fill that corners.  I know that my dad would say to me - find Joy.  So, that's what I am endeavoring to do.  You all know that when you decide to do something good, life will throw you a curve ball.  Boy did it ever!

January 2nd:
1) The boys and I went to Meijer and Josh dropped a glass ornament on the floor, which shattered and sent glass everywhere and caused him to go into a sobbing mess in the middle of the store.
2) Nate stepped in  . .. something . . that someone left in the aisle.
3) The boys wanted snails for their fish tanks and were told they were all dead.
4) Darryl had the worst day at work financially that he has ever had.  Not only did he make no money, he owed money for his cab rental.
5) The boys were mad because I told them they could no longer watch a show they were watching because I acutally sat down and watched a few episodes.
6) And just when I thought it was over, I took out my contacts and one of them disappeared.  I can always find them when they fall but this time, no suck luck.  Talk about a downer to end a day!

I will admit that when I awoke on January 3rd I had no joy.  We were all still fighting coughs and colds and now, my vision with glasses was less than par.  All four kids were here and they were arguing.  HA!  I read :-)  All day and reading does bring me joy.

So, here I am two weeks later and I'm still working on choosing joy.  For example, I went to the eye doctor and ordered new contacts.  Since it was going to be 7-10 days before the contacts arrived, he gave me a pair of soft contacts to use for free.  It was fabulous.  Sunday-Tuesday I got lots done because I could see again!  And then I got up Wednesday morning and one contact was missing.  For real.  I haven't lost one in over 20 years and now I've lost two in less than a week!  Uggg!  (Joyfully it was free, right?)  Now, I'm waiting and hoping the contacts come in sooner (like Monday) and not later (like Thursday!)

Living life with joy is a choice.  Despite circumstances or events that come along.
Posted by Jackie Koll at 7:00 AM No comments: