A Quick and Easy Christmas Treat 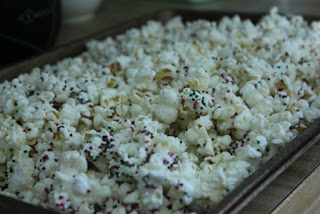 One of the activities we did with our Christmas countdown was make some fun popcorn.  I seem to have a lot of fun stories to go along with things lately and this is no exception.  I have . .. or should I say had . . .a Whirley Old Fashioned Stove Top Popcorn Popper.  Our microwave is on the fritz so I try not to plan on using it since it only works when it wants to; with that in mind, I decided to make it homemade which is more fun anyway.  I did my prep work - measured out everything I would need, put the oil in the pot and then went to finish up a few things before we made our treat.  When we went into the kitchen, I started the fire under the pot and noticed that something was dripping . . .faster and faster off the bottom of the pot.  I thought it was weird that it was sweating but I thought it was because I had washed it earlier and maybe hadn't dried it well.  Then I noticed the flame kept flaring up and there seemed to be a lot of liquid on the stove.  Then it hit me, there was no oil left in the pot!!!  Apparently, there was a small crack or hole in the pot and all of the oil leaked out.  Yikes!!  I had a couple disappointed boys but have no fear, I quickly moved to a regular pot and I must confess, I liked the regular pot better.  One less pot to take up room in the cupboard.

What did I use on this popcorn?
I measured out 1/2 cup of unpopped popcorn and put it in the pan to pop.
I then measured out about 1 cup of white chocolate chips

Melt the Chips until they are smooth and pourable.  Then, each of the boys got a bowl of popcorn, dumped their cup of chocolate on it and stirred.  Then I had divided the sprinkles into two containers and let them pour away and mix again.  We spread it on a cookie sheet to "harden" and then we snacked on it all day. 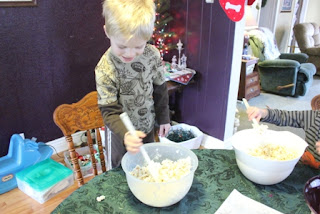 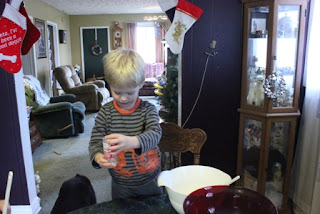 This recipe also would make a great addition to a Christmas gift basket or to hand out to neighbors.  I wondered about putting crushed up candy canes on it as sprinkles but I think they would have to be REALLY crushed - hard pieces of candy would not be so fun I think.