We survived and totally enjoyed our first camping trip of the season.  I hesitiate to type this next sentance because I might jinx our future trips this year but . . well . .this trip went off without a hitch.  It was almost too easy.  From hitching up the camper, to setting up, the weather (for the most part), and tearing down.  As the boys would say, "we beat our records for setting up and tearing down."  We'd love to get both of those events to under an hour but doing it in about 1 1/2 hours seems to be as fast as we can go for now!

I mentioned last week I talked about some stress-free camping ideas and the new one to us was two vechiles and let me tell you, what a game changer.  We loved having all four bikes, plenty of room to keep all of our snacks/coolers in the van and just to not have to jam things into one was great.  Plus, I got quiet time since I drove the van by myself HA!

We arrived on Thursday, set up the camper, unloaded and promptly decided that we were going to our favorite Pizza Place (Bernie O's) for dinner because we were HOT AND TIRED!  We came back to the campsite and took showers and put on PJ's before heading to the drive-in!  Just a few days Prior, I had checked and Captian Underpants was showing which the boys wanted to see.  Well, we got that and it wasn't showing because someone had a private party at one of the screens!  So, we made a quick decision and decided to see Pirates of the Carriabean instead which is not a choice we would make with the boys normally.  In the end, it was ok - there was no language or anything else - just lots of fighting which the boys loved HA!  Plus, when they got bored, they just played on their Ipads. 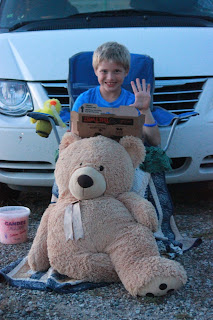 Josh sat in front of the van with his blanket, bear and the left over pizza!! 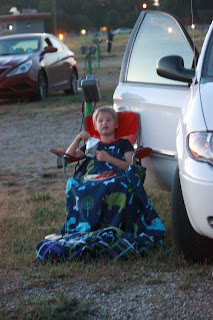 Nate enjoying a peanut butter sandwich.  He wanted to sit next to the speaker :-) 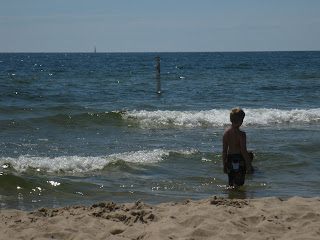 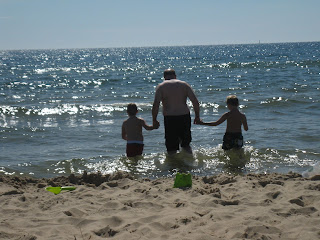 The water was cold and the waves were big which made it so much more fun!  The beach at Lake Michigan is truely my happy place and I'd pretty much rather be there than anywhere else! 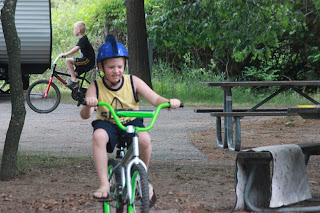 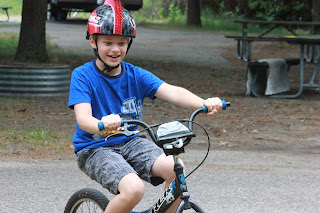 The boys loved the freedom of riding bikes everywhere.  This year they are able to go on longer bike rides by themselves and made lots of new friends. (And rescued a few lost littles too!) 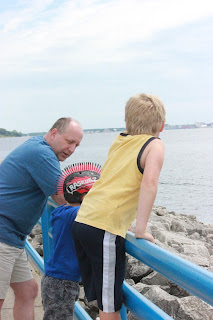 We always walk to the pier.  This year, the boys planned out a bike ride for us that took us to the pier before heading to a huge sand dune. 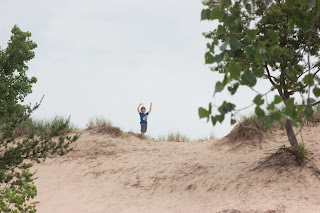 Josh managed to climb to the top of the sand dune. 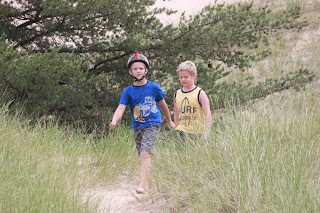 Nate made it part way before Josh was already on his way back down. 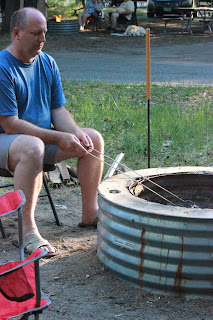 One of our favorite meals is steak kabobs cook over the fire and they did not disappoint.  Yum!

Satuday was our last day - which we really wished we had one more day!  A pretty heavy (and loud) storm rolled through during the night which brought lots of mud puddles. 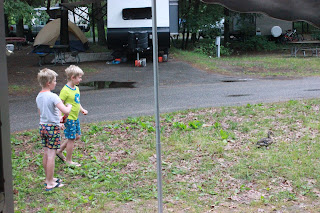 The rain also brought us some duck friends (There is a duck in this photo!).  The boys had fun feeding them (it was a couple :-) ) and they flew back to us a few times throughout the morning.

We are already looking forward to our next trip in July and we added an extra day to our planned trip because we decided it is way too much work to set up/tear down a campsite without spending at least two full days there!
Posted by Jackie Koll at 7:00 AM No comments: