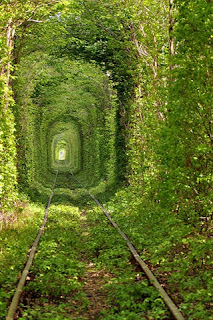 Doesn't that look peaceful . . .. and amazing?  I think it would be fun to wonder down that path on a cool summer day and life would be Simple.  This will be my (almost) final Simplify post as we start to push toward the holidays.  I say "almost" because I'm sure I'll post an update on what I'm doing this time around as well as a final post.  I'll tell you a little secret . . . .I already know what my theme word is for next year and I am already writing down ideas.

You can catch up on all of the previous simplify posts by clicking HERE.

This post is a little different.  I feel like I've hit just about everything I wanted to do to simplify our lives that resolved around the family and home.  Yes, there are still projects to complete - I'm still hoping to have the little projects done in the bathroom and have the kitchen painted by year end.  Otherwise, I'm very happy with where I've come from and where I've ended up!

There is one big area that I need to work on in order to simplify my life and that is . . . . . Scrapbooking!  My original goal was to be current by year end.  If I keep pushing I might get there but beyond that I have a bunch of projects I would like to get done as well.  A few weeks ago, I cleaned out and organized all of my scrapbooking supplies as well as all of my projects.  I sorted everything into envelopes and then into bins by project and then by year so as I work through my list and I can just pull out what I need and be able to complete the task.  I don't have a "space" anymore for scrapbooking so I had to combine things into storage solutions that will make it easy to pull things out and work at the table.

Here are my goals for the rest of the year.  I actually have scrapbooking goals written through November 2012 - that helped me lay out which projects go where but I also rework this goal list periodically so it isn't set in stone :-)

September 2011 - Finish 2010 Digitally and Updated our Family Album (pull the envelope and make sure that all of the pictures are in the album; file the duplicates for future projects)  I did not set up this list until halfway through September so I'm actually working on these projects in October.  I can say that I am halfway through December 2010 digitally and I am almost finished with Family Album project.  We did just get a few family shots done last weekend which I need to order and then add to this as well.

October 2011 - Do Jan-March 2011 Digitally; Christmas Ornament project - put pictures in kids 1st Christmas Ornaments; Update Josh and Nate's books (Pull envelopes and make sure all of the pictures are in the albums and file the duplicates for future use; order Josh's 3 year photos and put in his book as well);  Order 20 pages digitally. I finished the Ornament Project (see photo below!)  It was such an easy project, I just never took the time to do it!  I will admit that I printed the photos of Nate from the computer so that they were done until I can locate and/or order the pictures I want.  I didn't want to delay the project though (I should say they ARE the pictures I want, they just aren't on photo paper.)  Also, I've almost finished up Josh's and Nate's books with the exception of the most recent photos from a week ago as well as photos from our last two shoots (I guess I ordered to give to the family but not for their books!).  I will be ordering those this coming week and will update his book as soon as I get them!  I need to finish up Dec/Christmas 2010 so I can start 2011.  As far as ordering pages - I need to wait and see if I can fit it into our new budget yet; it might need to wait a little longer :-( 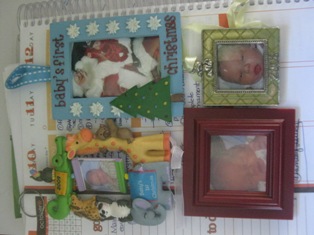 November 2011 - Do April- October 2011 Digitally (there is one 12 hour crop that I will be going to which will help with this!); Finish Red Pet Album (before Kids, I did an album for our pets and they are so much fun but, now, I've found that it is easier just to do the pet pages in with the regular pages so I want to finish this album since it is for 2008-2009!); Alive Album - I originally started doing an album for all of my husbands concerts but, again, I found that this really isn't a great album and now I include the pages in our regular album so I need to decide what to do with the album I started;  Order another 20 pages digitally.

December 2011 - Do November 2011 Traditionally - assuming that I am current by December (current means working on the month before during the current month) I want to return to more traditional scrapbooking verses digital.  My plan is do make sure that any major events are traditional and, if needed to stay current, I'll do some every day pages digital; Finish "old" album - Several years ago I started a project of going through all of my photos from way back in the day and get them into scrapbooks.  I am so close to being done (I hate working on these albums) that I can taste it but I ran out of pages.  So I need to order the things I need and finish up the pictures so I can be done with it!
Order 20 more pages.

I've been working diligently all year to get these projects done and I have made huge progress (2008, 2009, 95% of the old albums, the kids books started and almost done; baby books, and more!) but I still have a ways to go.  Just getting my year books current will take so much pressure off of me (except I still need to order ALL of the pages - feel free to donate HA!)  because I just want to enjoy our books!!!