Happenings In this House!

So, this week started out with sickness and that, again was our theme.  Last Sunday, Nate was still fighting a temp of about 102 but did enjoy a little time outside.  By Monday, both boys had horrible coughs and nasty noses.  So, we've used a lot of tissues this week but they both seem to (maybe) be on the upswing.  Otherwise, I think we'll be heading to the doctor on Monday!! Geez! LOL 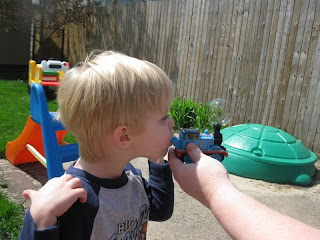 Josh got this Thomas the Train bubble maker in his Easter Basket.  When he blows on it, the whistle blows and makes bubbles.  He loves it. 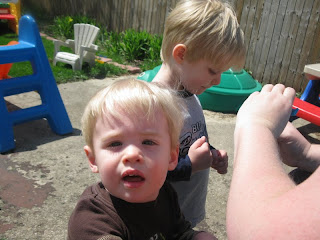 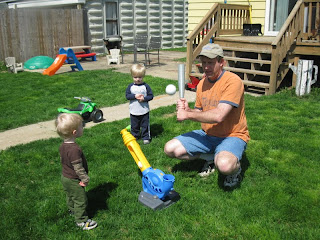 The boys had fun playing with Josh's softball set.  Grandma Lebeck got him this for Christmas, I think (or his birthday).  The thing is awesome!  Right now, he just likes to put the balls in and wait for them to shoot up.  Eventually we will use it as a tee so he can learn how to swing a bat.  Little league is just a few years away ;-)  (As is pee wee football . . .bowling . . .hehehehe) 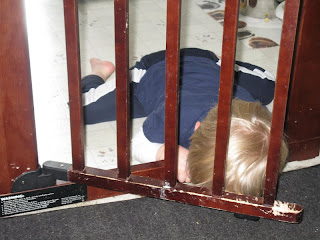 Josh was obeying.  We told him to come into the dining room and shut the gate so he crawled through the gate, one cheek at a time LOL 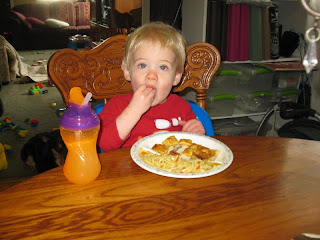 Nate was introduced to his booster seat this week.  We thought he would like sitting at the table since the high chair seems to cause him conflicts some days but, he is not 100% sold on it yet.  He will eat breakfast in it and endures lunch but by dinner, he walks to his high chair and says "up, up" 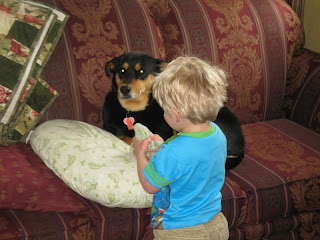 This week, Josh tried to make China his best friend.  One afternoon, Josh sat down in front of China and tried desperately to get her to sing EIEIO with him.  After all, he even showed her the cow and showed her how to say "MOOOO" but she just would not cooperate, not even with his begging "MOO, woof woof, MOOO".  China tried to retreat to the couch but Josh noticed that her nose was running (hahaha) so he took a cloth and kept trying to wipe her nose (I wonder why he would do that? Maybe because he has to wipe his every 2 minutes!)  Later, he lifted up China's lip to look at her teeth and said "ick, woof woof, ick" . . .I decided not to tell him she needs her teeth brushed.  :-/ 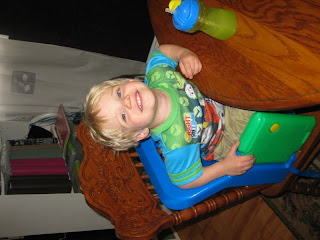 Finally, as with all things we get out that used to be his, Josh had to sit in the booster.  He hasn't used it in well over  a year.  He sat there for well over an hour just chattering away.  (And yes, PJ tops are theme around here - he is willing to put pants on but just loves his PJ tops. )

So, that was our week - I hope you have a wonderful week!!
Posted by Jackie Koll at 9:04 PM No comments: 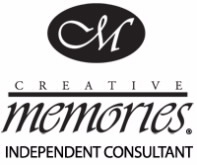 It's Saturday!  The perfect day for doing all kinds of fun things - including crafts!!!  There are some great new things that have come out this month from Creative Memories and the very first spotlight are these awesome punches!

I've always liked the punches that Creative Memories has sold but sometimes, I would get a little frustrated because I was restricted to just punching the edge of page - I couldn't punch anywhere I wanted.  Well, that is no more!  These new punches have a removable base which means you can position it anywhere on the page, place the punch on top of it and punch away.  This now gives the you the option of not only making a creative layout with the paper itself, you also have the punch shape to use as well.  Two items for the "price" of one!  The punches create a 1.5 inch punched shape so they are bigger than they appear in the photos.  The punches retail for $24.00 each.

What is your favorite craft? Scrapbooking? Making Cards? Making crafts with your kids?  The punches would be perfect for any of those items!  They aren't limited to just scrapbooking.

There is a special going on right now as well!  Check this savings out:

You can get both punches plus a 20 pack of cardstock (in summer colors, no less!) for $48.00.  There are 4 sheets of each color shown.  So, yes, you are getting all of that paper for free!!!  This special will go until June 30th or while supplies last.  For all of you that love making cards - this is the deal for you!

And the scallop circle maker.

Be sure to check out my WEBSITE to shop for the above items or to get anything you need for your crafty self!  (And please, share my website with other crafters you know - I appreciate the business!)
Posted by Jackie Koll at 9:03 AM No comments: