The Longest Breakfast Table and Some Family Fun

If you were around for my 40x40 list (a list of things I wanted to accomplish by the time I was 40) you may remember that one of those items was to eat at the longest breakfast table in the Cereal Festival in Battle Creek, MI.  Obviously, the festival only happens once a year so it just didn't work out until this summer.  It was such a fun time!  We got up  on Saturday morning and loaded up to make the drive.  We got there and found the cereal station - because we didn't get there until just before the end  there were only a few options for cereal so we grabbed two bowls, got some milk and found a seat at one of the tables. 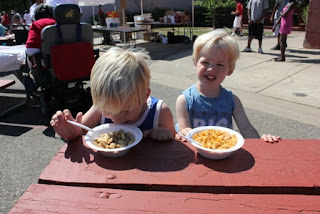 The boys loved eating the cereal - Josh devoured his shredded wheat - it kinda surprised me that he loved it so much.  The day was perfect - sunny, almost a little too hot but there was a great breeze which made it bearable. 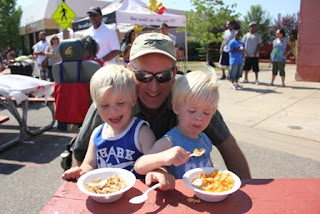 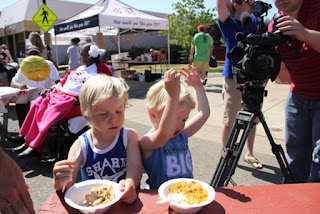 Do you notice the camera?  We were sitting there enjoying cereal when two camera guys stopped by and asked if they could film the boys.  Of course we said yes.  They started talking to us and then asked if we would mind talking on camera.  Now, we are normally the people that say no because, have you ever noticed that most people look dumb on TV?  Well, we agree so I answered the questions and then they filmed the boys for a few more minutes.  It was kinda fun actually :-) 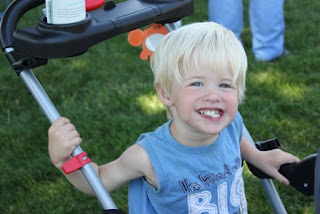 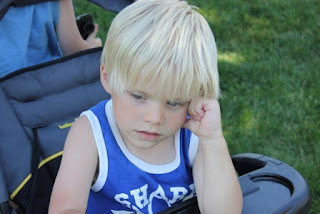 Once we finished our cereal we wondered around the festival.  The boys are more watchers than doers so they didn't play any games.  I think these two photos show my boys personalities.  Nate just smiles throughout the day; Josh is actually having fun but he gets overwhelmed with all of the noise and people surrounding him.  Honestly, in the next picture I took - he was smiling :-)

After the festival we headed to my Mother-In-Laws home for a small family reunion.  I took a lot of photos but I just picked out a few to share.  We spend the entire afternoon outside (they live on a lake and have a beautifully shaded yard so between the shade and the breeze off the water - it was a fabulous day) 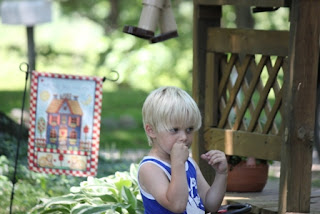 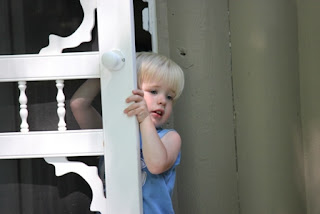 The boys enjoyed the afternoon so much - they never stopped.  They rode the little outside toys all over, picked up acorn tops and tasted them (ha!), ran in and out the old-fashioned screen door, laughed and played hard.  I do have to brag on them - one of my mother-in-laws cousins told us over and over how well behaved the boys were and she THANKED US!  Yes, thanked us for having such good kids.  We know we are blessed beyond measure with the kids we have and the personalities that God gave them but it sure is nice to hear it from someone else too :-) 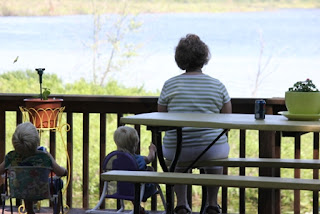 This is a true favorite photo.  The boys sat on the deck with Grandma Lebeck watching the water.  It is just too cute! 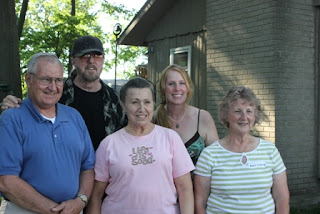 The "cousins" - in the front row are Keith and Nancy who are brother and sister; on the end in the stripes is my mother-in-law.  The guy in the back row is her brother Jim and standing next to him is their cousin Tory. 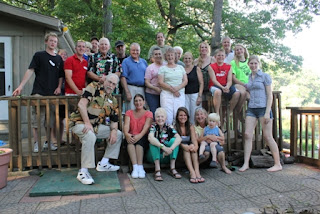 The whole bunch!  We really had a fun day hanging out with the family .

Do you know how you know your kids played hard?  When they don't wake up when you get home.  Wow.  I got Nate out of the truck, carried him inside, changed only his shorts out for PJ shorts (left his tank top on him) and laid him bed.  He never once woke up - he just whined a little in his sleep, then when I laid him down, he rolled over and was out.  I think he was tuckered out :-)

We do plan on trying to get back to the cereal festival in future years - it's such a fun experience!
Posted by Jackie Koll at 8:00 AM No comments:

Email ThisBlogThis!Share to TwitterShare to FacebookShare to Pinterest
Labels: 40 by 40, Happenings in this House
Newer Posts Older Posts Home
Subscribe to: Posts (Atom)