The Grinch and Some Tinsel

I'd just like to take a moment and express my sympathy concerning those families who lost a loved in one the tragedy in Connecticut.  I cannot imagine walking that road of grief and pray that they have people surrounding them that can lift them up throughout the coming months.

December 8th and 9th
It was the weekend.  We actually made a fun Christmas tree craft on Saturday as a family that I'll be posting about soon.  So we did not get to our Tinsel ornament and then we were gone all day long on Sunday.  We'll be picking up tomorrow :-)

As far as our special countdown treats - we had Little Debbie Christmas Tree Cakes and the boys loved them HA!  Again on Sunday, we were gone so nothing happened.

December 10th
Total Fail HA!  My husband took the day off due to some nasty weather and we worked all day doing some rearranging.  It seems that when we do other things, I don't get to our Tinsel and Grinch.  I felt bad late in the afternoon though because Josh wanted to make his "omanent" :-(

December 11th
Back on track!  Today we used water colors (for the first time ever) to paint a paper doll of Mary.  We were supposed to do both Mary and Martha but they painted for about 45 minutes on just Mary ;-)  Josh got crafty the rest of the day with crayons, markers, Dot pens  . . .and a non-washable ink pad.  Oops :-/  Of course, they also loved today's treat - Hershey's Kisses.  Nate saw them and said, "Ohh, I love those so much!". 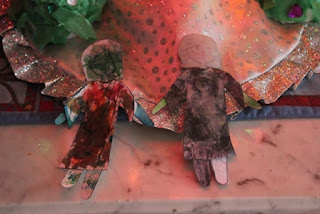 December 12th
The kids are now asking to make ornaments every day and this one did not disappoint because it included glue and marbles :-) 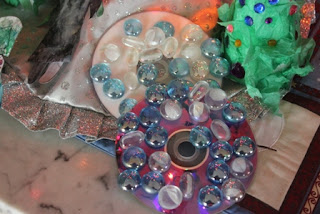 December 13th
I introduced Glitter glue today and yes, it was a hit :-)  Today we decorated Mary, as part of the Nativity.  To Josh loved the Glitter glue is an understatement - I don't think his ornament will ever dry ;-) 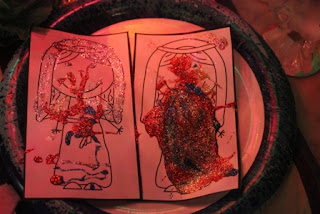 Our Grinch activity changed slightly today because the boys can now reach the story pockets so Josh actually came to get me and tell me it was time, while holding the card and our little "Grinch" puppet.  He told me he would read it so he described what he saw in the photo.  Then they pulled out their treats.  It was super cute!

December 15th
I almost was a slacker today but then they started asking to make their project today, which was Joseph. 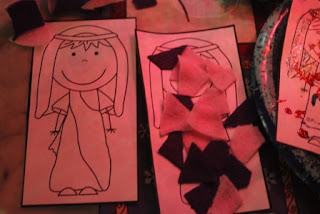 Do you notice that only one is decorated?  Well, a certain 4 year old threw a fit over the fact that I opened the banana he wanted to eat and then decided he didn't want to do the craft.  I have a feeling he'll want to make it tomorrow.

Today I found Josh and Nate doing the Grinch by themselves, without me.  I guess I better keep an eye on those two characters! HA!

So, I've had to altered the crafts from Tinsel - it seems this second half has a few more complicated crafts included and I knew my kids were not to that point yet.  The simple truth is we are talking about the store of Christ's birth and the ornaments are just extra fun.  The main thing is that they are hearing the story.