We have lots of traditions throughout the year.  Some of them we've been doing for as long as we've been . . .engaged!  On Saturday, March 10th, we made our annual trip back to the East side of the state to visit where my husband and I first met and where we got engaged.  It's hard to believe that 11 years ago, on March 18th, we got engaged.  So many changes!!!

Our trip started out a little . . . . rough . . . Nate got carsick for the first time. . . three differant times.  We went through this with Josh too (thankfully it only lasted for about 6 months).  This hit at about the same age as Josh's did so we are hoping Nate will grow out of it too.  The poor little guy :-(  I think it was a combination of the sun shining on him and flickering through the trees, it was warm in the back seat, and he was trying to watch a DVD on a screen that had the sun doing funny things on it.  It didn't slow him down once we got to our destinations though!  Thankfully, I had packed extra clothes . .. but now, I will need to pack several outfits again along with wet wash clothes until we know he is past this stage.

Our first stop is always for lunch at National Coney Island. 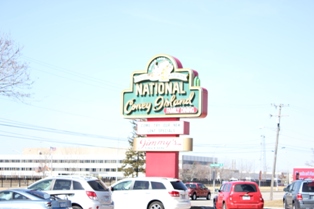 (Sorry for some washed out and blurry photos - I'm learning to use a new camera and have a LOT to learn!)  I crave this restaurant throughout most of the year and always get the same thing.  A Large Hani and a Chili Cheese Fry.  Oh. My.  They are good.  I've tried to recreate the Hani at home and can't do it!!

Once we finish eating, we always drive by the apartment I lived in at the time we met - I loved that apartment and, honestly miss it.  It was big, set up wonderfully, and just was so me! Granted, a family of 4 in a one bedroom apartment might be a little cramped :-)

From there, we head out to Metro Beach which is where Darryl proposed.  Now, the year he proposed, it was warm.  I can remember walking around and people where in shorts, riding bikes and skate boards . .. but most years, it is COLD!!!  This year, the wind was wicked and so frigid.  One of the coldest trips ever.  We had hoped that the boys could actually play on the play ground but wow, not happening! 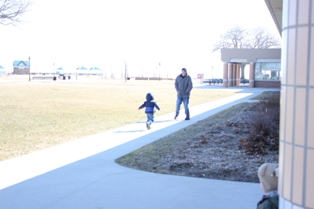 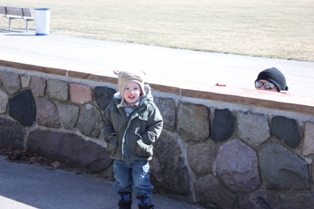 This photo freaks me out!!  There is Nate, looking all cute . . .and a freaky guy in a black stocking cap and dark glasses is peaking over the wall.  Don't worry - it's Darryl LOL  He was trying to make Nate laugh and I caught him like this - it makes me laugh! 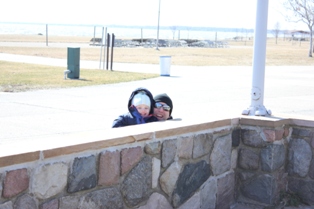 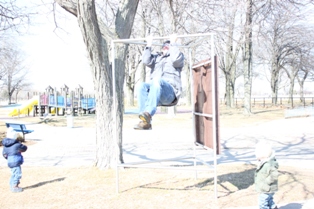 Every year, as long as we have gone to Metro Beach,  Darryl does a pull-up on the bar.  Eventually, we'll get the boys to do it too! 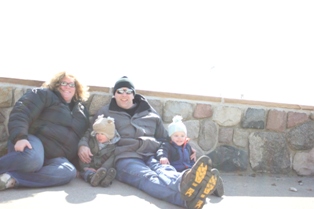 This is our annual photo . .. we usually do it at the end of the boardwalk, which is where we got engaged, but the cold and wind was too much.  Instead we sat down behind this all and got it. Even with the wall - I had wind blown hair. 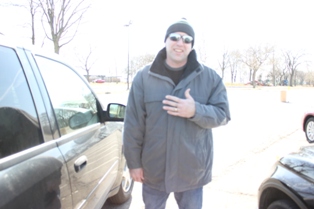 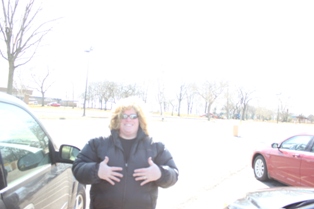 Another annual photo op - we always take photos of our rings (we did just mine when we got engaged) Now I have my wedding bands and another ring Darryl got me after 5 years.  (He's still learning the camera which is why there is so much sky in the photo HA!) 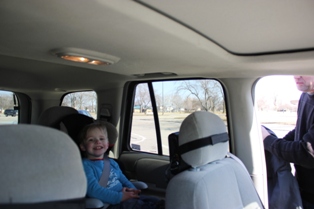 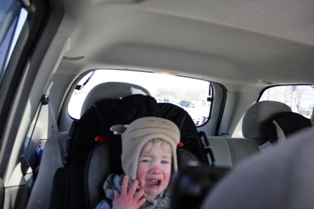 
We started a new tradition last year - we visit the Morley Candy Factory which is where Sander's Candy is made.  We all pick out a special treat. 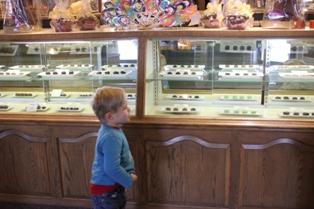 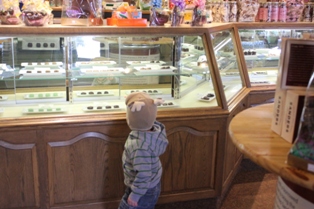 The boys, over the course of the 30 minutes we were there, picked out about 300 different items but finally settled on chocolate covered rice krispy treats and a bag of mixed hard candy that they filled.  I was hoping for a Supreme Caramel Apple, like I had last year, but they didn't have any so I had a gourmet chocolate covered pretzel and some turtles.  The candy is so good.  I told Darryl that each year we come, the bill will get higher because the boys will get better at picking out treats :-)

The last part of our day is flexible.  As the boys get older, we are going to pick as a family what activity we want to do.  Last year we went to a fantastic Arcade/museum but, the age the boys are now makes that activity hard.  The arcade is packed and our boys like to move fast.  So instead, we took them to Build-a-Bear.  I've wanted to take them for awhile but there aren't any on this side of the state so it was a perfect time to do it.  In future years we'll go back to the Arcade, go bowling, to a movie, or to some of the museums in Detroit. 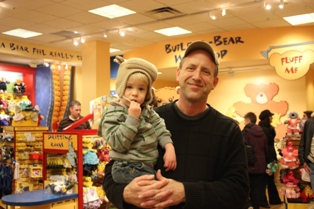 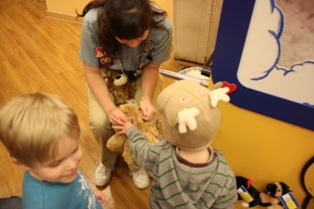 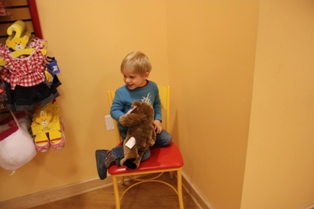 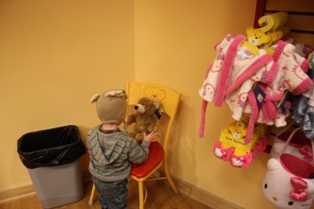 Nate had a ton of fun here.  He quickly picked out his bear and then picked out Josh's because it was a little over whelming for him.  Even when it was time to fill his bear, he wanted Nate to press the pedal but, once his bear was filled, he gave it a big hug and just loves it.  Both boys happily slept with their bears when we got home.

Despite the fact that we've been making this trip for 10 years, dinner is always up in the air.  This year, since we were at the mall, the easiest thing was to eat at the food court.  Darryl and I weren't super hungry but the boys inhaled with quasidillas :-)   Maybe some day we'll find THE place to stop for dinner!!

It really was a fun day that ended with the boys loving the music in the truck.  Darryl was playing some of his favorite CD's when one of the songs finished and both boys started clapping and asking for more.  Every time a new song would start, I would see Josh shaking his head to the beat :-)  Super fun!