Welcome back!  I wasn't sure if I was going to have anything to post this week - I really have to plan to make sure I actually accomplish something but then, I realized I had "accidentally" done quite a few things :-)

The first idea is a simple one, it is just a printable from living locurto, aren't they adorable? 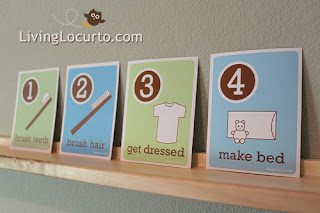 Several months ago, I won a chore chart for the boys which I really like but, honestly, they aren't  ready for it (or maybe I'm not HA!)  First, I think they need to master some basic skills on their own plus the 4 items in the routine shown above are on the chore chart as well.  I love that we can start with these and then it will be a natural transition into the larger chart.  So, I printed these and am working on a small reward system.  They currently love pennies so I'm thinking that for each item they complete in the morning, they will earn a penny and they can drop it into their piggy bank.  Plus pennies are easy on Mom and Dad too - I can almost guarantee that I have 50 pennies on hand each week - probably in the car somewhere :-)   I may also just start with one or two of the cards and then add another one once they have mastered the first two.  See? Easy, Peasy.

The next few are recipes - between the Superbowl and testing out ideas for an upcoming shower, I ended up with several things I made all at once!  First up is a drink.  I've mentioned before that I'm always looking for a refreshing "mixed" drink - we do not drink alcohol at all so by mixed I just mean a mix of flavors instead of Crystal Light or Soda.  First, I will confess, unlike most of the world, I am not a Sonic Fan.  We've been twice and I really do not see what the excitement is about.  But, I saw this idea from The Little Brown House and thought it might be really good for a shower because you could serve it in a pitcher instead of punch bowl, which gets messy. 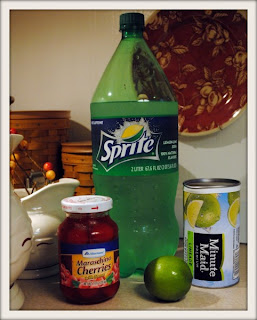 I made this for our drink for Superbowl Sunday . It was good - nice tart flavor - but after drinking one glass, I was done.  I think my husband drank 1/2 glass and said he couldn't drink anymore. It is pretty acidic.  Maybe if you love Sonic's Cherry Limeade you will love this .. . I just felt like it was Sprite on Steroids :-)  It is pretty though :-)


We have a favorite Mexican Restaurant and one of the things I love to get is there Southwestern Egg rolls so when I saw this recipe from Cake and Allie, I knew I had to try them plus I thought they would be a great addition to the shower menu IF they were taste worthy. 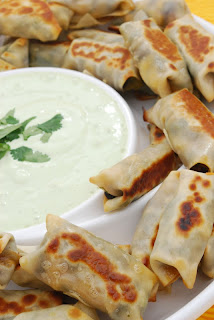 I used Wonton Wrappers because that is what I had and they worked fine.  But, I must admit, they didn't have a ton of flavor and neither did the dressing.  I was hoping for the same flavor as the ones I get at the restaurant and they weren't even close.  Probably not something I will make again unless I can refine the flavors more!

That's it for this week.  I do have some more simple things planned to get done before next Tuesday to share.  I feel like February is slipping away and I haven't done much yet - I think the fake spring we are having is just messing with me - I need SNOW to get stuff done in February HA!  Oh, and for the record, neither of my hopeful recipes (the egg rolls or the drink) will make it to the shower.  Don't worry thought I have tried and true things I plan on using - I'm just looking for that one special new thing to add though!
Posted by Jackie Koll at 3:00 PM No comments:

Too Cute Not to Toot!!

Ok, sorry again about the big old forgotten post last week - I've been trying to have posts ready 1-2 weeks in advance and completely forgot that I had never completed the Too Cute Not To Toot! post.  Oops!  As soon as I posted it last week, I started searching for ideas for this week to make up for it :-)

With Valentine's Day coming closer we are all looking for ideas to tell our sweety we love them - here's a great idea from How Does She.  I like this idea better then the 52 ideas because I only have to think of ten (not that I couldn't think of 52 but they would start to sound dorky after awhile!!) 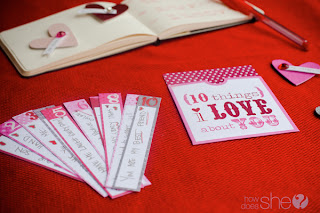 I love party ideas - I think they are fun and who really knows when I'll need them!  I love this circus party idea from Vixen Made - I wonder if my niece would mind a Circus Themed Bridal Shower HA! (Just joking!!!) 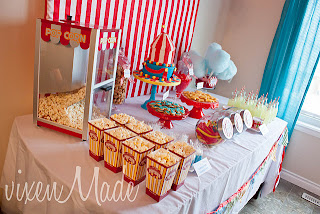 These cookies from Sugar Bean Bakers are super cute and a very easy twist on the typical Peanut Butter Kiss cookies. 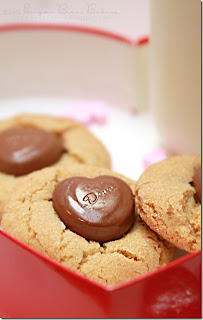 Sometime around this time of year last year I posted about Valentine's Pouches for the dining room chairs.  I went back to that post this year and was going to make them for the boys . . .until I read the instructions and realized I wasn't ready to sew that project so when I came across this idea from Oopsey Daisy I had to save it for future reference!  Such a cute and fairly simple idea!! 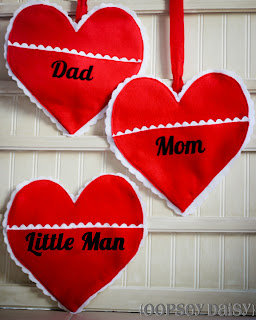 This next idea is a great tutorial for the 52 Reasons I love You project that I did not complete last month.  Paper Vine gives some great information on how to create this project - maybe I will try this one some other time this year! 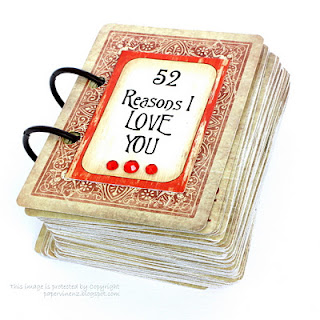 I have a very specific reason for wanting to post this tutorial from Shindig Parties To Go . ... I needed to know how to make cupcake wrappers for an upcoming shower I'm helping with!  This will be awesome for that and for future birthday parties too! 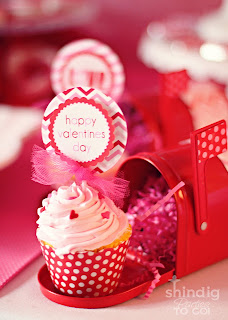 Clean and Scentsible  shares a really cute card idea using one of my favorite things - the kids handprints!! 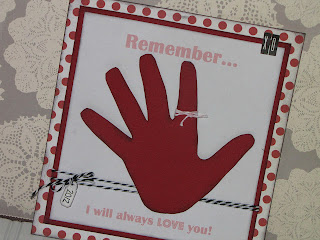 We love football and, as the boys get older, I look forward to some Sunday Football traditions so when I saw this table runner, I knew I had to save the idea from Everything has its wonders.  I for sure want to make this before this fall so we can use it for special games as decor.  :-) 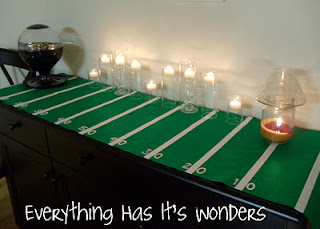 And to go along with the football idea, this neat craft from Mom On Time out would be something fun to make next year on Superbowl 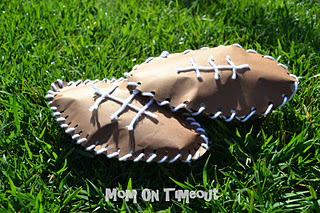 That's it for this week!  I'm really hoping to get some inspiration for March decor soon - I need some ideas for my "Mantel" and for a new wreath!!
Posted by Jackie Koll at 8:00 AM 1 comment: