A month or so ago, I tried a new twist on Sloppy Joes called Philly Cheese Steak Sloppy Joes. 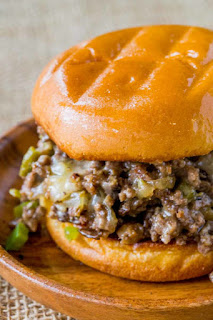 photo credit: Dinner then Dessert
These sloppy joes were really, really good.  They had the flavor of a Philly Cheese Steak but so much easier and faster to cook.  I did leave the mushrooms out because I made them when my mom was coming over and she does NOT like mushrooms (they aren't my favorite either!).  Now, truth be told, this did not go over well with my kids.  Josh loves sloppy joes -the "normal way", so he was not happy with this thing with peppers and onions HA!  You can find the recipe HERE.

Now, I took the leftovers from this dinner, put them in a ziplock bag and froze them for later.  We ate them recently and I had planned to just re-heat it in a sauce pan and serve it on a plate.  BUT, that morning I came across this Recipe for Ground Philly Cheese steak Grilled Cheese.  As I read the recipe, I realized that I could use the leftovers and make the Grilled Cheese!  I made the sandwich on my panini press which made it really tasty - but would have held up better with a nice sturdy bread and not regular sandwich bread :-) 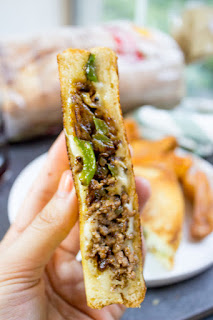 *As a side note, I didn't realize that both recipes came from the same blog until I wrote this post!
Posted by Jackie Koll at 7:00 AM No comments: