So, I have to admit that as I'm going through photos from March, it gets a little harder because I know now that my dad's time was counting down.  It makes it more emotional.  I wish I had taken a few more photos of him when he was with the boys but I'm thankful for photos we do have taken in March when we gathered at my parents house to see my brother.  It's like another "first" seeing photos taken just weeks before my dad's stroke and realizing there is a "before" and an "after".


Somehow, St. Patricks Day has become my most fun holiday to celebrate other than the "big ones" (Christmas and Easter).  It's just plain fun.  I think part of it is the simple fact that the boys truly believe that a Leprechaun comes into the house and leaves candy all day (Rolos).  It gets harder each year to hide them without them seeing me but still - it's fun.  I also love buying them a special t-shirt - it's the first summer shirt of the season and it is just plain fun. 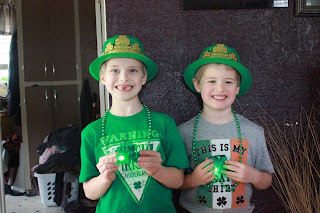 Wow, they are pasty white HA!  Compared to right now where they are super tan . . .yikes! 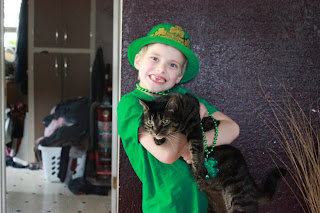 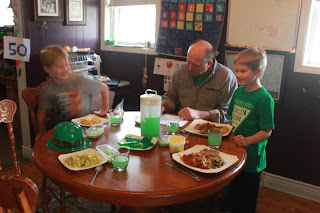 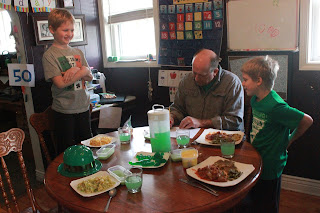 Our annual Green dinner.  Stuffed Cabbage in the crock pot, Green Jell-o, Green Kool-aid, Crash potatoes and Green pudding with coins in the bottom of the glass.

The boys were able to test for their next Tae Kwon Do belts on March 18th.  They had worked hard during two semesters of Friday School to learn what they needed.  A cool thing was at the end of the testing, they got to break a board with their foot.  It was fun to watch. 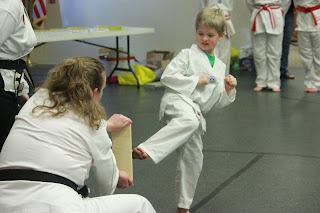 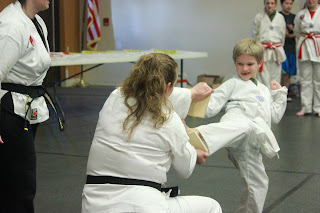 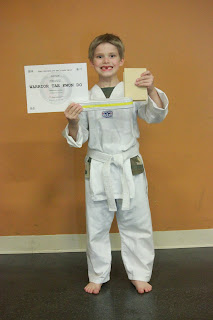 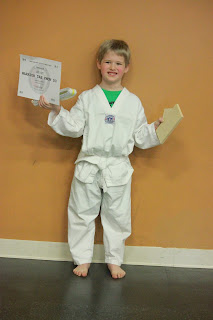 They both moved on to their yellow striped belt.  (And yes, they are already working hard on being able to test for their next belt in the spring)
Posted by Jackie Koll at 7:00 AM No comments: