This was our first full week of preschool and we had a great week.  You can read my intro post HERE.  What a difference this time around with school.  Josh actually was counting down the "sleeps" until we started on Monday.  Both of my boys and the little munchkin I babysit come running to the table when I say it is time to start lessons.  They don't even argue that the TV gets turned and and, let me tell you, cartoons are a favorite thing in this house!

Here is a basic overview of what we did this week.  I did not take photos of everything but tried to get them in action on some fun things. 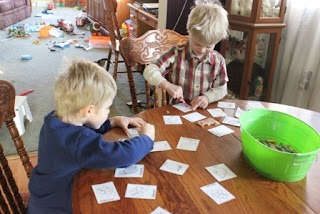 We began with Bible and had a lesson on the Fruit of the Spirit - Love.  We colored pictures with different fruits on them and talked about using kind words. 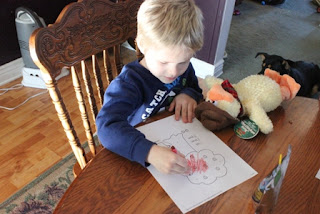 For all of our basic lessons, I am using information from 1+1+1=1.  Included on the page is a lesson plan page and she gives links to all of the extra stuff like this color by number shown above and the Upper/lower case A activity show below. 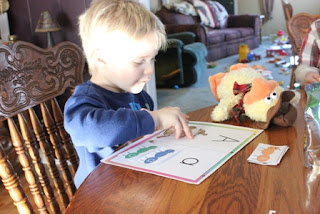 Looking for upper/lower case letters was something new to us but it was interesting because later in the week I heard Josh playing with one of his V-tech toys and he said, "look, lowercase letters".  He's already catching on to the idea. 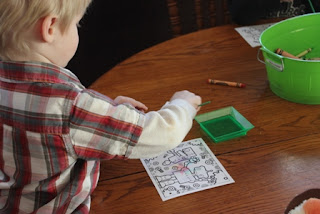 I tried to include some type of fun activity each day.  On this day, it was painting with water paints.  The boys received lots of different craft items from Papa and Nana for Christmas (THANK YOU!!!) so those have been so handy this week in throwing in fun activities for the boys. 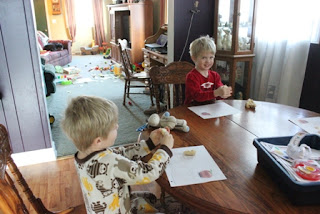 I re-introduced play dough to the boys and this time it was a huge hit.  The first task was to create an Upper/lower case A/a with the play dough.  Then we got the cookie cutters out and they played for hours. 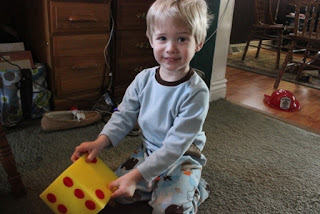 Look at that cute face??? The dice were one of the new things I introduced as far as a "game".  We used them to play an Ant game but the boys really just loved throwing them around the house. 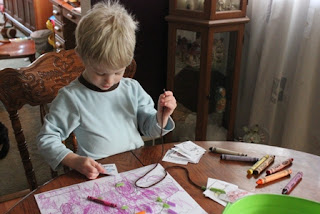 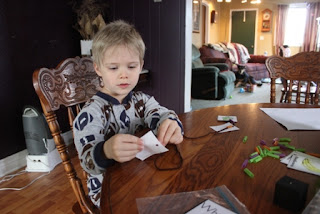 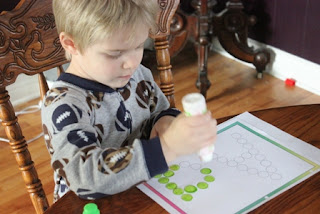 The dot-to-dot markers were a huge hit. See how nicely Josh is filling in the dots? I was pretty proud of him. 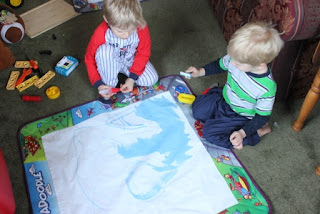 Another fun activity that we did was practice making "A"'s on the new Aqua Doodles the boys got for Christmas.  Ok, lets be real, I drew a couple of letters and the boys just drew fun stuff.  It was still fun though!


I had hoped to get to some more crafty things or PE activities but we had the privilege of having extra friends over instead.  A friend of mine needed some babysitting help so we had two more kids in the house for a few days this week. We focused on sharing, using soft words, and being kind :-)  Life lessons, right?

We also introduced some new music. Our song of the week was "All in All".  But we also learned "Father Abraham" and "I'm in the Lords Army". Josh's favorite was "Father Abraham" - he loved moving around to that song.

That was week one :-)  I already have week two prepared and ready to go next week.  We'll still have friends visiting us so I'm hoping to get through just the basic lessons.

Int
Posted by Jackie Koll at 8:00 AM No comments: