Several weeks ago, I had the privilege of attending a wedding for a good friend.  Jeremy, the groom, and I have known each other for close to 20 years so, needless to say, to be able to watch him marry his true love was a joy.  On a side note, this was the first big event I attended since getting my new camera and I was thrilled to be able to "play"! 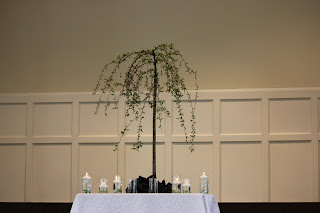 The did something I've never seen for the Unity Ceremony; they did a Unity Tree.  Yes, that is a live tree and, instead of lighting candles, when it was time for the Unity portion of the service, they each poured a vase of dirt onto the base of the tree.  The pastor talked about how the roots of tree grow deeper through the years and, when it is watered, it bears fruit each year and gets stronger.   I'm assuming that they planted it in their yard but who knows! 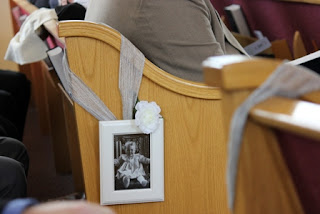 I love all of the creative ideas people use now for the ends of pews.  Personally, I made big white, green and gold bows and loved them but, had I known about this idea with the frames, I might have used it.  The bride found this idea on Pinterest and it was too cute.  Each frame held a photo of the bride or groom.  Such an adorable way to show off photos. 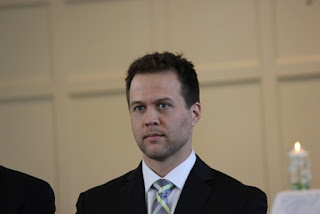 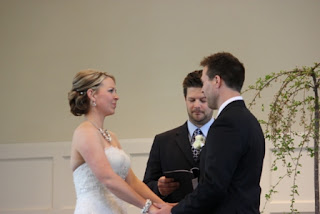 I had to include photos of the couple :-)  I love this last one above - this was after they had poured the dirt on the tree, while a song was being sung, they took time to pray. (At least that is what I think they are doing!) 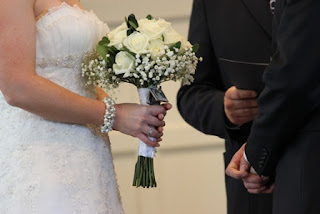 I'm not sure if you can see the little frames on her flowers in this photo but those frames held photos of special people that are no longer here, such as the groom's dad. This is another idea that she found on Pinterest and, after looking through her posts on some of her wedding boards, I think she also got the idea for her bouquet from there as well. 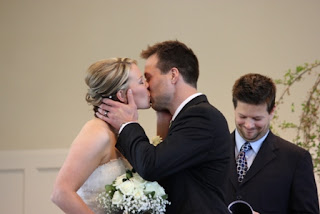 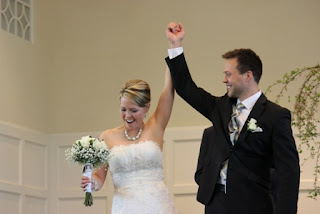 The kiss (of course - a favorite photo of everyone!!) and the big celebration when they were pronounced husband and wife. 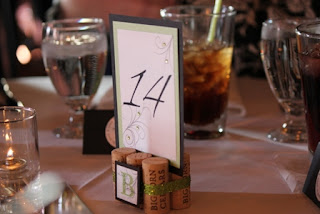 I know that the bride spent a lot of time creating these table numbers and she was so excited about them!!  Can you guess where she found this idea?  (ummm Pinterest).  The bonus is that their Monogram ("B) on the front is attached with velcro so it can be removed and then be used by someone else. 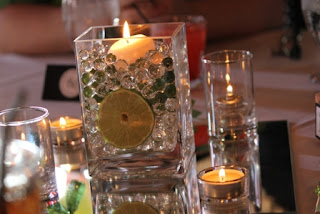 These were the centerpieces on the table.  Again, her inspiration came from Pinterest - but not one specific idea that I found.  They were beautiful and simple. 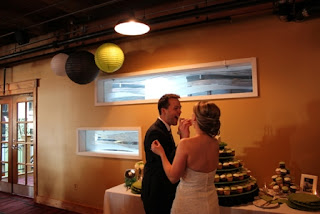 As is popular right now, they did a cupcake stand for dessert.  What they did differently was that they did the "famous" cake feeding activity before the meal was served.  That way, once people were done eating, they could just get cake.

They did some other great things during the reception - the bridal party was introduced and each couple did something creative as they entered.  The bride and groom walked in with big glasses and the bride showing off her awesome green tennies. 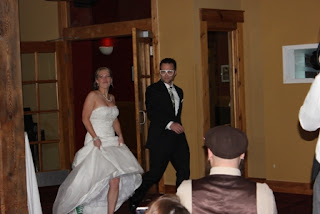 When they got to the center, on the dance floor, a song started and they danced an awesome routine.  I mean, it was fantastic and everyone loved it.  I wish I could have recorded it.

One last thing that the bride has done that is really truly one of the best ideas I've heard.  All of those things she used - the frames for the photos on the pews, the items for the centerpieces - from vases to the mirrors, the lanterns that hung from the ceiling at the reception . .. she sold it all on Craig's List.  She listed it the week after the wedding and most of it was gone within a week.  Such a smart idea!!