Welcome back to week 2 of our summer fun activities (You can read about Week 1 Here).

We had another successful week of fun little activies - some of them planned and one, not planned.

Monday - I decided to sign the boys up for the summer Library reading program this summer so we drove to the Library and, after signing up, I took the boys to the children's area so we could pick out some books.  The boys loved it - they looked at books and played games for close to an hour.  Here's a little funny story for you.  Our library is actually an old mansion - here's a photo of the outside for you - - 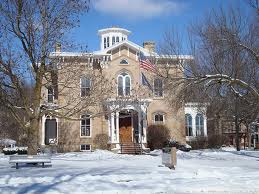 Isn't it awesome?  The children's area is on the second floor and I have never been up there before.  The librarian asked if I would prefer the elevator or the stairs.  I figures the stairs - no big deal since my kids do stairs all of the time.  Well, let me tell you, I almost had a panic attack about half way up those stairs and I don't even have a fear of heights!  It's a winding staircase so as you go up and the steps start to wind around, they get skinnier and skinnier on one end.  I seriously almost had to sit down on my hiney and slide back down HA!  My kids did fine.  Now, when we were done getting books, we took the "scary" elevator . . it's the kind with the accordion door on the inside.  Trust me, as slow and scary as that box was, the stairs were 700x's worse :-)

Tuesday - This was our family day :-)  My husband had the day off so we took the boys to Boulder Ridge Wild Animal Park.  This park opened last year and we had heard so many good things about it.  It did not disappoint!  You can get close to many animals, feed the birds and take a wagon ride out to see all of the other animals.  Here are a few photos from our day: 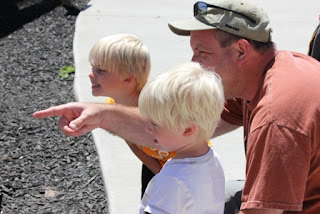 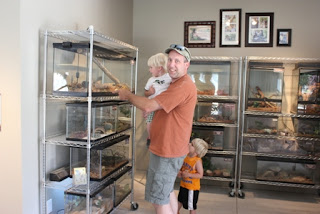 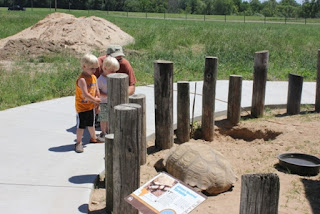 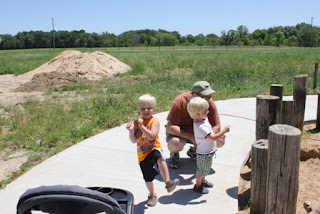 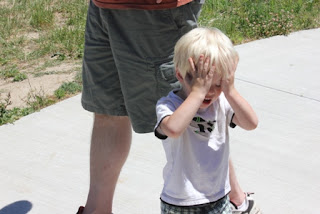 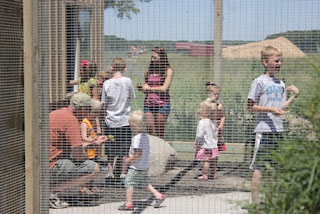 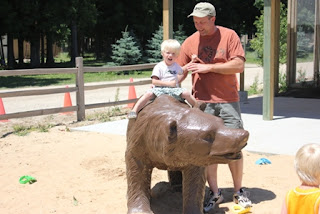 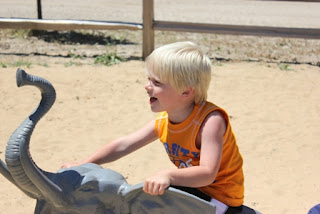 Wednesday:  My original idea was to make Moon Sand to play with but then I thought about it - the kids love playing in their sandbox so why would I want to "make" sand to play with inside?  Crazy me!  Instead we made Sprinkle Dipped Ice Cream Sandwiches.  Well, kinda.  I picked up the mini ice cream sandwiches and gave each of the boys a plate of sprinkles.  In stead of dipping their ice cream sandwich in the sprinkles, I ended up teaching them how to gather sprinkles on their tongues by licking their plates.  What?  It was fun :-) 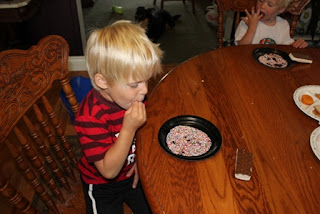 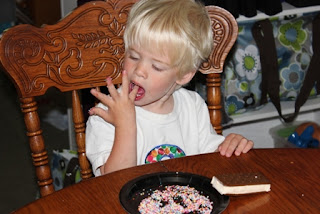 Thursday:  This is the totally unplanned fun activity.  I've been cleaning up the basement to make one area the toy room.  The boys came downstairs with me to hang out while I cleaned and they discovered the love seat that is currently in the basement.  Well, they then spent all afternoon down there and had a blast being "allowed" to eat their snack on the "little couch".  I put away my plans for today and just let them play.

Friday:  We were going to do what I had planned for Thursday but Josh specifically asked to get his Fish game out that his Uncle Kel and Aunt Debby gave him.  Considering the fact that I was saving the Fishing Game for a rainy day activity anyway, I just used the game as our activity for the day. 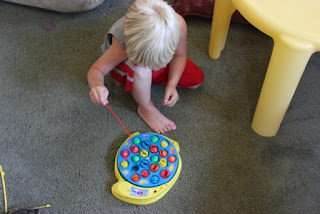 So once again, I chalk this week up as a total success.  Looking forward to next week :-)

Here is one last photo - do you know what those are?  Those are sunflowers!  Yep, they are popping up already.  (Excuse the weeds - not top on my priority list HA!) 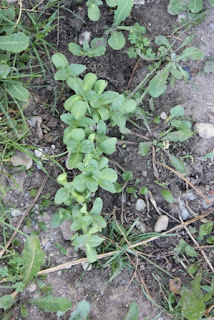