We finished up our Christmas Season with a family party with Darryl's family.  Darryl's grandma is in her 90's and lives in a nursing home so we have the family party there.  I will admit, it is not the first choice for any of us to meet at the nursing home but it has been the only solution for the past few years. 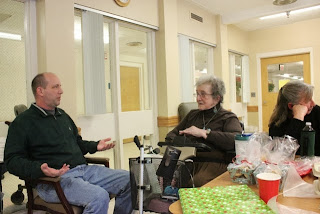 Darryl visiting with his Grandma.  She is hard of hearing (naturally, after all she is in her 90's!) so having a conversation is not easy especially with two very active boys. 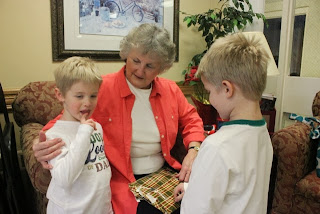 Josh and Nate giving Grandma (Darryl's mom) some gifts.  Josh had painted two pictures for her and we also gave her the Fingerprint Christmas light pictures. 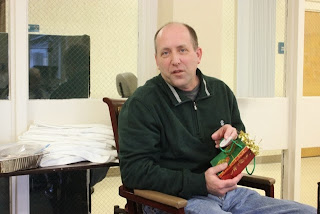 For gifts this year, we did a cookie exchange.  My mother-in-law, sister-in-law and I all made cookies and did our little exchange.  Grandma gave us each a bag of truffles (since she couldn't bake). 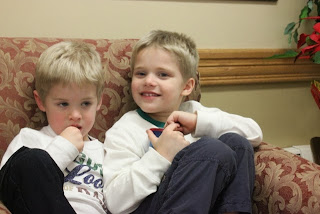 The boys trying to be so patient while they waited for their gifts - the blessing of being young . . .you still get gifts! 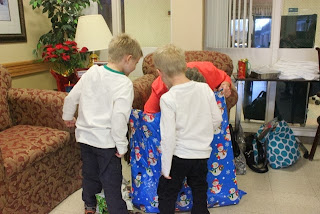 Grandma giving the boys their gifts. 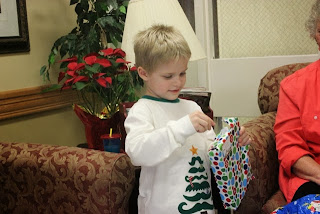 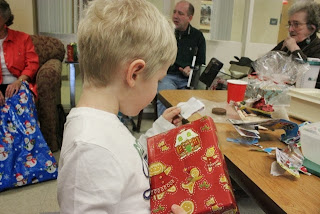 Funny story, the boys each got a DVD.  When Nate opened his, he handed it to me and said, "I will never, ever watch this movie."  HA! 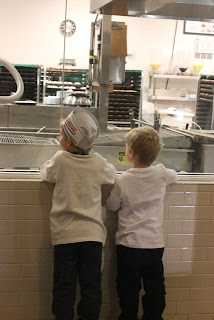 After the party was over, the four of us went out to dinner at my favorite place - The Beltline Bar which is a Mexican Restaurant.  It was so good!  Another funny story, while waiting to get a seat (the place was packed but thankfully we remembered to call ahead!) there was another little boy there.  He would scream and kick; he scratched his mom in the face and then threw his sippy cup over and over again out of anger.  When we sat down, Darryl asked the boys if they say that boy and what did they think of how he acted.  Josh said, he was bad and that makes me want to be good HA!   From there, we headed home but noticed that the Light was on at Krispy Kreme which means free donuts!  We decided to stop and took the boys in - they were enthralled with the donuts being made.  They stood at the window for 30 minutes.  Josh did eat a donut and loved it - Nate is not so much of sweet eater so he just watched the process. 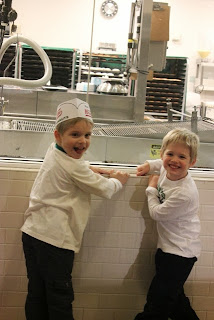 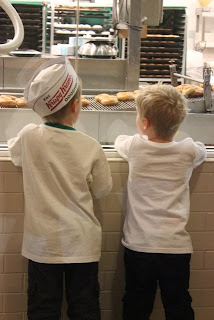 As a side note, my mother-in-law and I talked about the Christmas gathering and plan to make some changes.  One, we aren't going to go to the Nursing Home.  Instead each family will take time in December to go visit Grandma for an a little bit and take her a special gift.  Then, for the family party, we can gather at my MIL's house instead.  Two, we are going to exchange gifts.  Whether we draw names, buy for everyone or do a general gift exchange game, we are going to do gifts.  Plus we want to be able to buy my in-laws a gift of appreciation just because.  :-)

So, this is the end of Christmas!  This year has been really great.  It's been relaxing and fun with great family time.  Compared to last year when I was so sick I don't even remember most of December or January . .. this year was a "perfect" Christmas.  Shoot, we even had snow!