Too Cute Not to Toot

I'm really looking forward to see what great ideas people come up with as we start this holiday season.  There were so many things I saw last year that I had hoped to complete for this season but, well, I'm trying to simplify my life HA!  (Just wait - I have plans)  So for now, I'll keep "saving" them here and sharing them with all of you!

We'll start out with a gift idea for the kids.  Oopsey Daisy shares a great tutorial for making an ABC mat.  I would really love to make one of these for the boys to play with this winter.  I think they would have a blast with it! 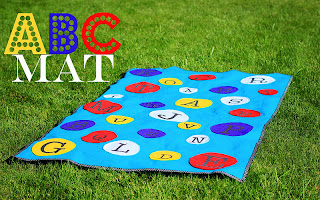 This could also be a cute gift idea or a stocking stuffer.  The idea comes from Diary of a Crafty Lady and requires some simple supplies!!  A great way to teach colors :-) 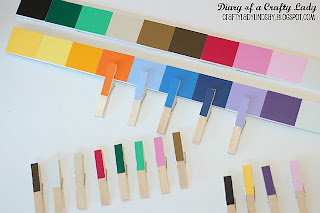 Lines across my face is a blog that I currently follow and she is just starting out with a series called The 13 Crafts of Christmas.  I won't promise to share all 13 because, well, if I don't love them . .  .but this first one is cute.  I love countdowns despite having never made any version of one yet - so maybe I'll make this one eventually! 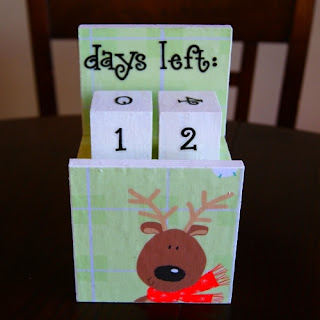 Switching back to Thanksgiving, I like this idea for a Thankful Tree from Bargain Bound.  It is a simple idea that fills up a wall.  The only thing that I can't wrap my mind around is . . .the trees are off the tree; they add them to the tree each day with a thankful thought written on it . . .shouldn't the leaves be on the tree and then as you write a thankful thought, they fall on the ground?  Or am I just being too much of a realist?  What is your opinion? 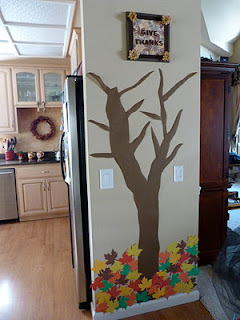 The Country Chic Cottage is also hosting a series called  "Handmade Holidays" with 12 different handmade gift ideas.  The first one is for Guest Slippers.  I don't have many guests but this would still make a cute gift for anyone! 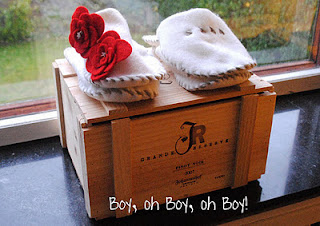 That's it for this week - with some of these series starting up, I'm hoping to have more ideas to share this week.  Things seemed a little slim this week !
Posted by Jackie Koll at 4:00 PM No comments:

Email ThisBlogThis!Share to TwitterShare to FacebookShare to Pinterest
Labels: Too Cute not to "Toot"

Success and Epic Failures
Yes, you read that right - EPIC failures.  Wow,  I had some total doosies this past week.  I'll start with the failures and will not spend a lot of time on them but will then show you several successes all around a shower that I co-hosted with my mother-in-law for my niece.
I wanted to try out a few recipes that we wanted to use at the shower - so I tried out an Egg Casserole in the crock pot.  Wow.  It was awful.  The eggs never set up; and it had no taste.  It was a total waste of food and we ate Mac and Cheese that night for dinner.  The other thing I tried was an overnight French Toast recipe that was a Paula Dean Recipe.  It was awful.  The bread was so soggy that it basically became a wet, gross, mushy custard.  I spit it out.  We had Little Ceasers Pizza that night.  Out of respect for those sites, I'm not going to link back to the original posts.  Just trust me when I say, it was not my week for cooking.  (There was another recipe I made this week that was NASTY but it didn't come from Pinterest HA!)
I also saw this idea: 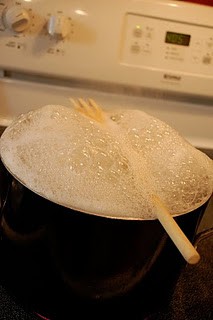 It looks like a great idea doesn't it?  I was boiling potatoes and thought I would try this - I proceeded to watch the pot boil completely over making a huge mess.  So this counts as another fail!!!
So, now, lets move on to the GOOD things!!!
First up, I wanted to make some muffins for the shower and came across a recipe for Donut Muffins. They turned out fantastic!
This is what the inspiration looked liked from Smashed Peas and Carrots 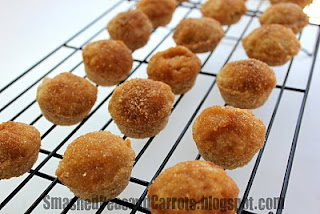 And this is how mine turned out: 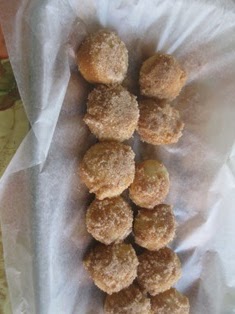 They are super yummy!  Here's the recipe, because it wouldn't be fair to show you this picture and not share the recipe:
Donut Muffinsadapted from Smashed Peas and Carrots
These are truly as good as they look and they do actually remind me of a good cinnamon/sugar donut.  A couple of things I learned :  1)  I doubled the recipe to make enough for a shower.  The recipe states it makes about 18 mini muffins but I actually 50 mini-muffins when I doubled it and a few of the muffin cups over flowed while cookie so I probably could have gotten close to 55 muffins.  2) Separate the "dipping" cinnamon and sugar into smaller bowls.  The best way I can describe it is that it becomes like wet sand as you dip the buttered muffins into it.  Otherwise, just make this recipe and try not to eat them all!
1/2 cup sugar

1/4 cup butter, melted
1/4 tsp ground nutmeg
1/2 cup milk (soy milk works nicely too!)
1 tsp baking powder
1 cup all-purpose flour
1/4 cup butter, melted
1/2 cup sugar
1 tsp cinnamon
Preheat your oven to 375 degrees and grease a mini-muffin tin, set aside. Mix up the 1/2 cup sugar, 1/4 cup butter and nutmeg in a large bowl. Then, add in the milk, baking powder and flour until just combined. Fill muffin tins about 3/4 full and bake for 15-20 minutes.
During baking get your cinnamon-sugar topping mixed up! Melt 1/4 cup butter in a small bowl and then in a separate bowl mix together the cinnamon and sugar. When the muffins are done, remove them from the pan. Dip the tops in the melter butter and then roll the WHOLE muffin in the cinnamon-sugar mixture. Let cool and then try not to pig out too badly!!
-----------------------------------
On to the next idea I picked from Pinterest.  My inspiration came from Cheeky Kitchen and looked like this: 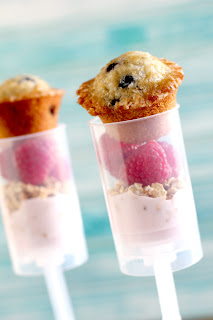 Aren't those just adorable?  As much as I wanted to order some of these push-up pop containers off of etsy.com, I just couldn't make it fit into the budget so this is what I made: 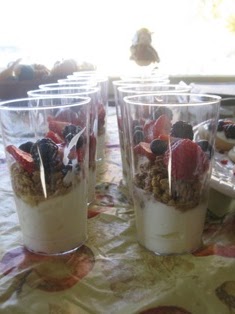 I think they are still cute and are actually a little easy to eat, most likely.  I simply bought clear plastic cups and filled them with Vanilla Yogurt, Granola, and Fresh Fruit.  I must confess, after I went to the store, I added up what I spent.  I could have bought 15 Yogurt Parfaits from McDonalds (they are $1.00 a piece) and it would have cost me less and saved me the work HA!  But, they looked nice and everyone seemed to enjoy them!
Now, this next idea is one that I've had before and just love but I did see an inspiration photo on Pinterest as well.   The idea I found is from Pioneer Party and she actually supplies an actual recipe for this idea. 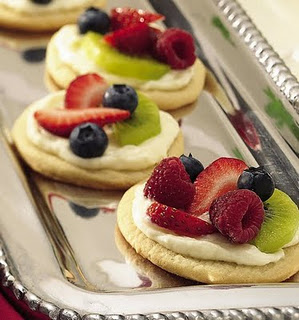 Now, here is my version : 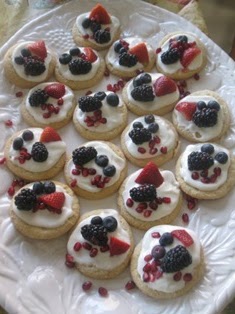 I keep these really simple - I bought sugar cookies from my local store (Meijer).  Then, spread some Cream Cheese Fruit Dip on top (you can usually find this by the cut up fruit in the deli - it comes in a tub like Caramel Dip) and top with your favorite fruits.  I used some blueberries, Strawberries, Black Berries and Pomegranate Seeds (yummy!!)
Finally, I wanted to share this LINK - I find this site through Pinterest as well and it is a great place to get games for all kinds of of events from showers to birthday parties.  I just looked at the most popular games and picked two.  Yes, you have to pay a small fee to "purchase" the game but, you can search through the list and find quite a few that are on sale.  It was well worth it to me to do it this way!
Finally, this is the actual recipe we used for the overnight french toast - it is a tried and true recipe of my own - I should have just stuck with this to begin with!  This is so good you almost don't even need syrup!
Holiday French Toast
1 loaf French bread
½ cup butter, melted
1 cup milk
¾ cup brown sugar
Cinnamon
¼ teaspoon salt
3 eggs
Melt butter in 9x13 cake pan.  Sprinkle brown sugar over melted butter.  Sprinkle with cinnamon.
Beat eggs in bowl, add milk and salt
Cut bread in 1 ½ - 2 inch slices.  Dip in egg mix and place in pan.  Refrigerate overnight.  In morning, bake at 325 degrees for 30 minutes.
When turned out of pan, sugar mixture will be on top. 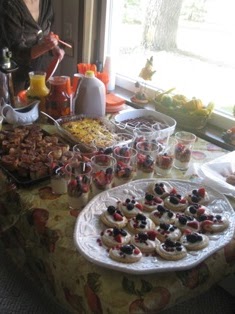