This week seemed busy.  It was one of those weeks were I feel like I let other things get in the way of our daily routine of school leaving us a little behind where I wanted to be.  It wasn't even all my "fault" - on Wednesday the kids I watch had a half day, Nate had his bi-weekly call, Josh had school testing, and Darryl was home.  There was nothing extra going on that day!  In the end though, it wasn't a very exciting week and therefore very few photos! 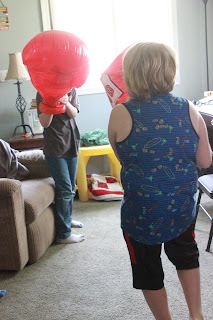 Josh and Nate each got a set of these blowup boxing gloves in their Easter Baskets.  Nate and Cooper played for a bit 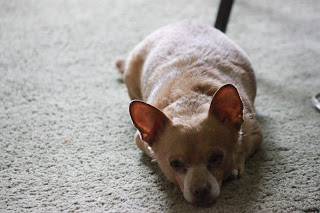 Our sweet pooch Dash.  It's funny, it's a totally different dog than when we met him at the shelter.  He's so content and happy . .. and a little bit crazy HA!  But he loves his people; he doesn't like being alone! 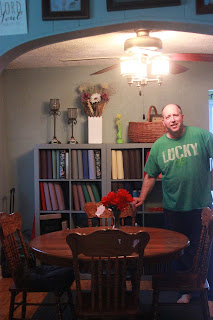 Of course, we finished up the dining room this week with the hanging of photos and artwork. And I AM Lucky to have such a great guy!  (See his shirt!) 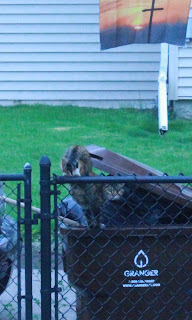 I caught this little visitor this week.  We don't usually have cats in the yard during the day so I know this guy was hungry.  I watched him climb up the fence like a ladder, walk across the top of the fence, and this is where he was when I grabbed my camera.  Yes, I scared him away nicely after the photo.  As much as I love cats, I don't love cats in my yard or garbage!!

I had coffee with my brother, Kel, last week which is a rarity since he lives in Brazil!  He told me that he reads my menu and then gets disappointed when I don't follow it ;-) LOL  Well, I made it my goal this week to at least eat what I planned even if we eat them on different nights than planned!!!  Things have slowed down a little bit around here other than we are waiting for the "go" for my mom to move over here by us.  So that does help when it comes to planning meals.  We still have two nights a week that we need easy, flexible meals but otherwise, we tend to be home.  I think it is time to start planning some simple grilling meals too.  We are charcoal fans though, so it does take a little more work to grill than just turning on a gas flame outside on a stove (that's my take on a gas grill HA!)

Have you ever heard of the show "Restaurant Impossible"?  Well, it's a crazy show on Food Network where Robert Irvine comes to rescue a failing restaurant.  He's coming to a small place in Grand Rapids in another week or so - not any place we would ever visit, quite honestly, but they gave the opportunity to sign up to be customers on the day of the show.  Needless to say, I sent a quick e-mail hoping we'd get in just for the fun of it. . .we didn't it.  That's all. HA!  It would have been fun but in the end it's ok because, like I said, we wouldn't normally eat there - not our normal food choice!

After all of those random thoughts, here is the plan for this next week.

Friday - I'm so tired of cooking HA!  We've been trying super hard to not spend money but I feel like I have pulled everything out of the freezer and cupboards that I can but I don't have time to go to the store until Saturday so Taco Bell it is (because we can eat the cheapest at Taco Bell!!)

Saturday - It's time for a little appetizer fun.  Meatballs, Shrimp Cocktail, BLT Dip, Beefy Enchilada Dip (for something new) and Chicken Nuggets.  Just something fun on a Saturday night

Sunday - It's Mother's Day!  We are actually headed to my in-laws for the afternoon.  My niece likes to get us all together on this day now especially now that she is a mom too.  I think the plan is to grill - I just bring whatever they tell me to bring!

Monday - Lasagna and Garlic Bread.  I've been craving my homemade Lasagna - not only is it good for dinner it is also great for lunch (and maybe breakfast HA!)

Tuesday - Chicken Alfredo Pizza and Chips.  This is an old favorite.  I don't make it often because it is pretty rich but it is so very good!

Thursday - We heading to my mom's to help her move so we will grab food on the road.

And this is how last week actually went:

Friday - We have a busy day with state testing and meeting up with my oldest brother for a few minutes while he passes through town.  So, I'm keeping it simple - Pot Pies and Yeast Rolls  This is exactly what we had!

Saturday - Taco Baked Potatoes.  I have left over Taco Meat (and Chicken actually) so I'm going to throw baked potatoes into the crock for the day.  Then we can have a little baked potato bar with Taco Meat, Shredded Chicken, Butter, Sour Cream, Cheese and whatever is in the house.  I switched meals around and we actually had scalloped potatoes and ham with mixed veggies for dinner.  It tasted so yummy!

Sunday - We will be gone all day.  Darryl is working; I have a Choir Concert and the boys and I have to leave at 1:00 pm since we have to be early.  The concert isn't until 4:00 so we will be hungry afterwords.  I'm kinda leaning towards using some Olive Garden gifts cards for dinner but it will depend on the time.  I decided to skip going out so we did the Taco Baked Potatoes instead :-)  We used taco meat, diced ham, Stadium Cheese, Broccoli, and sour cream.  They were super good!

Monday - Monday nights are TKD nights so we are running in a couple of directions usually.  I try to keep dinner something that the boys and I can eat early and Darryl can eat when he gets home. French Toast Sticks and Sausage sounds good! This is a change up - I had leftover chicken in the fridge so I opted for Quesadillas with rice and beans instead.

Tuesday - Darryl has requested Beef Tips and Noodles so that is what we are eating! That's exactly what we ate :-)

Wednesday - we don't have AWANA anymore but Darryl often still has practice.  We might do Taco Bell or I will cook something easy like Pizza at home. I decided to work on using up some food in the freezer so I boil a ham bone to get all of the meat off it.  I then made scrambled eggs with ham and cheese, scones, and french fries for dinner.

Thursday - Ham and Scalloped Potatoes.  I have yet to make this - it's something I really love - great comfort food - but it seems like I always feel like it takes forever to make . . .when really, it doesn't!  I can throw it in the oven as we walk all the door for piano and it will be done when we get home! We wrapped up the week with Ham and Potato Soup.  Again, using up the ham and also some carrots, celery and onions that were on their last leg!
Posted by Jackie Koll at 7:00 AM No comments: