This past weekend we went camping for the first time in 2 years.  Last year, we planned to camp with our tent but as each reserved weekend approached, we checked the weather and saw oodles and oodles of rain so we cancelled.  This year, we had planned to camp several times this summer but Darryl's surgery date was pushed to the end of June which left us hoping for camping by the end of August.  Thankfully, it worked out!!  We've come a long way from our first camping days.  The first summer we camped for the very first time, we used a borrowed tent that was, well, old.  The second evening, it blew down in a gust of wind and was done for - we had to pack up and go home at midnight.  We purchased a new tent later that summer and enjoyed a great vacation Labor Day Weekend despite having our truck broken into and things stolen (I did get my camera back and that was really all that mattered!).  Darryl and I were laughing about the fact that the first few years we camped we were "glampers" in the sense that every morning we got up, went to the showers, and got ready for the day including him shaving and me blowing drying/curling my hair and putting on make-up.  This past weekend - somehow I ended up in the shower once without soap because it got left behind by my husband in his shower and the second time, it was only a quick rinse off in my bathing suit with the boys after swimming in the lake.  Yikes!

I will toot my own horn and say that as of two years ago, I was one of the most organized, well planned campers around.  I had everything down to three bins - two that always stayed packed and one food bin.  I had lists and plans and knew exactly where everything was and could pack up the truck in about 20 minutes.  Throwing kids in the mix makes it a little more complicated though especially now that they are older and require more stuff HA!

This is how I plan: 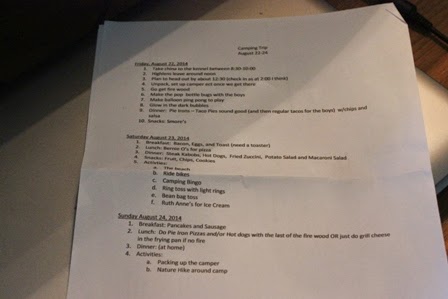 The first step is that I do a basic overview of the days we are going to be gone, what needs to be done, the recipes, activities and anything else special.  I tend to do this about 2-3 weeks before the trip because it allows me time to pull together any crafts or special activities, change items or look up directions to whatever is needed (or where ever we are going!)  I can almost guarantee that this list will change by at least 75% by the final packing! 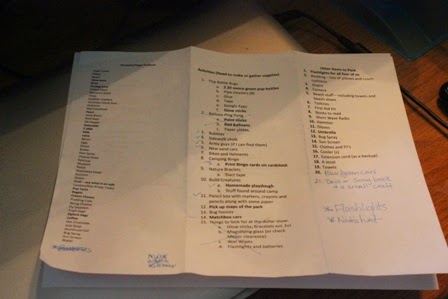 About a week before our trip, my list turns into this three columns of sweetness.  By this point I've changed the meal plans to something more concrete so the first column is every single food/meal making item I need.  I put the items in bold that I need to purchase but then just list everything so I know what I need.  The second column is everything needed for activities/crafts for the kids.  Again, I use bold to show what I need to purchase.  The final column is my misc. column - I just list everything that doesn't fit the other two categories!  Again, this is not set in stone but it does give me something to go by when I start shopping.  One of my favorite things to do this time was to go to the Dollar Store first and look for items for camping - especially for the kids - like glow sticks, army figures, small trucks and cheap, cheap playdough. 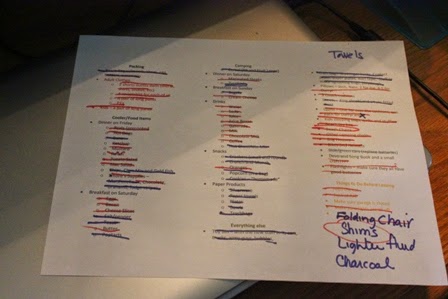 The final list!  This is my brain for the weekend to make sure we have it all!  I usually take time to type this up (using the previous lists as helpful guides) about 2-3 days before the trip so I can start gathering things.  This includes everything from food items to pack, craft items to pack and everything else including a folding chair for Darryl :-) See how "Shims" is circled . .. those were to help start the fire and guess what we forgot? YIKES!  We managed but we won't forget the bundle of shims next time!   Funny side story, we had everything packed and loaded - I went back into the house to check that everything was off and lock the doors.  Guess what was sitting in the dining room?  The bag full of mine and Darryl's clothes OOPS!  Good thing I went back inside!

Truth be told, my packing this time was a little crazy.  As this was the first time with the pop-up we really learned that I need to pack differently and we need to return to the idea of bins for everything and not pack in bags thinking there is tons of room for stuff in the pop-up!  (There isn't!)  Which brings me to the last part of my planning -- it is making a list of what I need to change or ideas to make things easier.  Here's a few of the brainstorming ideas that Darryl and I talked about:

1) Pack less food :-)  We don't tend to camp in the middle of no where so we can (and usually do) go to the store every day just to get out somewhere.  Instead, just pack what we really need.  I plan on spending a little extra in the future and purchase individual packages of things like chips, cookies and cereal.  This way, we can open what we want and not have full bags of chips or full boxes of cereal open and getting stale all weekend.
2) Use a large rubbermaid bin for the food - stuff doesn't get crushed and then, we just keep that bin in the truck all weekend which keeps it out of the way but easy to get to anytime we need a snack.  We also tend to like to keep the coolers in the truck too so if we take off for the day we have everything we need for an impromptu picnic
3) Plan a simple pre-prepped meal for the first night.  This time I had planned Hot Dogs/Brats but - by the time we got there, got the camper and camp set up and STILL needed to go get wood . . .well, it was already 6:30 and we were HUNGRY so we ended up heading to town and getting McDonald's.  Next time I plan to have something simple like tacos so we can put the meat in the crockpot as soon as we get there to heat up and be ready to eat when we are hungry!!
4) Have a bin in the camper for "stuff" - by "bin" I mean a small container where we can throw bug spray, keys, even a phone so it doesn't fall out of a pocket.  Several times Darryl said, "I don't know where to put stuff".

Anyway - we are learning as we go that's for sure.  We are tentatively hoping and praying to be able to camp one more time this fall because the boys love it so much but even if we don't we ARE planning to camp often next summer and look forward to perfecting our planning.