I totally missed posting Week 11 last week which was to clean your windows - inside and out.  I was in the middle of Spring Cleaning with Ask Anna which had also included some window cleaning so I didn't even think about it.  My windows are mostly done -I have not done the outside yet but considering the fact that there is snow on the ground AND I can't reach them, even on a ladder, which means my husband has to do them, I guess it is understandable.  (He takes out the screens and storm windows and I wash those while he gives me streak free windows!!)
So, lets move right no to week #12 which is building a Coupon Binder.  Just a week or so ago I wrote a post about Meal Planning (which was also a weekly challenge) and I included what I do for couponing in that post.
As a little bit of a review, though, I've tried it all.  Couponing is an awesome thing, if you do it wisely.  I've heard recently about the new show "Extreme Couponing" and how people literally have grocery stores in the basement and I have to ask myself, is that really wise?  Will they use that stuff up?  I know that some people are "addicted" to coupons and they get everything (Like cat treats) that they don't need and than give the stuff away to charity because they got it for free or next to free.  I, honestly, don't have time for that . .. . my time is precious for other things, not spending 40+ hours a week on coupons and shopping :-)
After trying tons of things from all kinds of coupon holders to SavingsAngel.com (which really is an awesome site - it just took more time than I was willing to give) I have settled on my coupon binder with the baseball card inserts.
My binder is just a standard "Mead 5" zippered three ring binder.  I like the zippered feature because nothing falls out.  It has this nifty little mesh pocket where I keep pens and my calculator so that I always have them.  I order the whole set throughCoupon Magic Organizer a couple of years ago and got several different kinds of pockets. 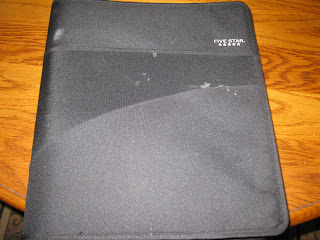 I use this single "slanted" pocket holder in the front to hold my grocery list while I'm shopping and than I also use one at the front of my coupon inserts to hold coupons I need to file. 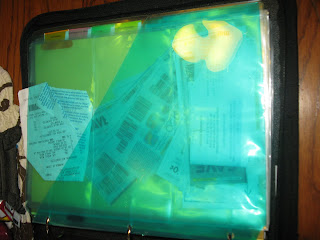 Than, I use the three slotted holders for the coupons for the week.  The bottom slot is the ones I pulled to use, than as I shop, I slide the ones I actually need to have at the checkout into the top slot and the ones I don't end up using into the middle slot.
This set came with tabs but they did not work for me.  I found that by dividing my coupons by aisle in the grocery store it has saved me tons of time!  When I'm in the "ethnic/pasta" aisle and see something either on a special deal or "clearanced", I can just jump to that section and see if I have a coupon instead of leafing through pages of coupons to find one I need.  I also only put one coupon in a slot - even when I have doubles.  I want to see everything AND if it is a tall coupon, I don't fold it, I just let it cover up another slot.

Another thing I don't do is that I don't buy 5 or 6 papers on a Sunday.  Sometimes we are lucky to remember to get one!  I've found that I really don't need that many coupons because I don't shop like that.  Instead I just use the one coupon I have to get what I need.  Printing coupons is great, just make sure and weigh the cost of ink and paper into what you are saving.  My printers uses ink like it is water so printing coupons was costing me upwards of $80.00 a month (the cost of replacing ink).  Now, I can go 2-3 months without replacing ink.  If you have a printer that will do "grayscale" - use it (mine does not thus, it uses a lot of ink!)
I know that most "savers" really push the idea of buying and bulking up on your pantry.  But, I read a post at The High Heeled Housewife that really hit home.  Instead of always buying in bulk, write your menu for the week and ONLY buy the items you need.  I think you'll find you spend less money than you realize.  I know when I was doing SavingsAngel full force, yes I was getting tons of stuff but I was also spending $150.00 a week.  When I quit that and went back to only buying what I need, I spent $70.00 the first week.  Amazing, isn't it?
For more ideas on couponing this week make sure and check out A Bowl Full of Lemons.
Posted by Jackie Koll at 7:00 PM No comments:

Have you heard about Swag bucks?
As my blog slowly evolves, one of the areas I hope to talk about more is simple money saving ideas that I've tried and work (or don't work) for me.  As a single income family, any little item can make a difference.
I've been hearing about Swag bucks for ages but never really tried it until about the middle of February.  I just signed up for it (it's free) and used it to search anytime I want to find anything.  At first I did not set up the tool bar but, after about a week, I went ahead and added it. I found I search a lot more with the tool bar than without it.
It is not a perfect search site by any means - Google or Bing are far better when it comes to specific things but, what I've learned is to search through Swag Bucks first and than go to something better if I can't find what I need.  Over the course of 8 weeks, I've earned almost 1000 swagbucks and I really don't search a whole lot either.
What can you spend these "bucks" on?? All kinds of stuff but what interests me most are the Amazon gift cards - you can get $5.00 for around 450 bucks and a $25.00 gift card to travelocity for hotel credit which is only around 370 bucks.
Cha-Ching!  Another way to save money.  The amazon gift cards I can use towards gifts for Christmas and birthdays and the hotel credit - well, my husband and I like to get away 2-3 weekends a year so what a great way to help out on the cost!
I won't lie, if you sign up under me, I get referral credit so . . if you haven't tried it out yet, just click
HERE
and I should get credit!!!
Than, send it out to your friends and earn your own credit too!
Do you have a favorite site that helps you earn rewards that are good enough to use?
Posted by Jackie Koll at 9:08 AM No comments: