Show Us Your Life Fridays- The Office

This week on Show us Where you Life - The Office :-)  You can check out Kelly's Korner here.

In my home, I no longer have a room that is designated as the "office" - we gave that room to our son Nate, so he could have his own room.  Instead, I created an office space in my living room. 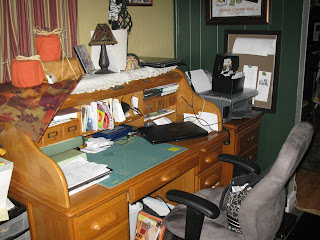 I actually like my little corner - since the Living Room is where the kids play, this keeps me in the same room whether I'm paying bills, writing, or scrapbooking.  The biggest challenge is keeping it neat!!  I work hard to keep it from piling up too badly but every Thursday is "clean off my desk day".  I have to sort through piles, file everything, and make sure that nothing slips through the cracks.  I love my roll top desk - it was a "bet" with my dad when I was in high school.  I bet that I could save 1/2 the money to buy a desk we were going to build together.  He agreed thinking I wouldn't do it (I only needed $250.00!).  Well, I saved my money but he didn't want to build one LOL  So, I saw one on sale at a furniture store that equaled the $500.00 total . .. but when I got home from school, he had bought this one which was much nicer :-)  The thing is a bear to move but I love it so it is worth it!  That's all - my simple little "office" space :-)

Here is the list of all the rooms and dates.  I'm listing this here because I keep searching for it!
9/24 - Master Bedrooms

Email ThisBlogThis!Share to TwitterShare to FacebookShare to Pinterest
Labels: Show Us Your Life Fridays

Day 5 - Your Siblings
I have three older brothers who are wonderful!!  They are all older than me (so yes, I'm the only girl and the baby) but I have to say, there is nothing better than having three protectors!!  I seriously don't think anyone has better siblings than I do! 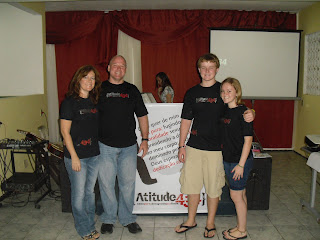 My oldest brother, Kel, is a missionary in Brazil with his family.  He and his wife, Deb, have 4 kids.  The oldest two are in the states - Kaleb is married and graduated this past May from Cedarville University.  He and his wife now live in Colorado and we miss them!!  Alicia is a senior at Cedarville University majoring in nursing.  The other two (shown above) Marisa and Micah are currently in Brazil. Ten things about my brother Kel
1) He  is extremely organized and very much a planner.
2) He is also very caring with a compassionate heart.
3) He is a lot of fun to be around.
4)  He is a great preacher and teacher - he was actually my 6th grade Sunday school teacher!!
5) He is a Godly man.
6) He is a great father who adores his children (and his children adore him too!)
7) He is sincere - if he says he is going to do something, he will.
8) He's honest - if you ask him his opinion, he will tell you.
9) He's got the best laugh - it's one of those "big" laughs that you can't miss . . well, I miss it because I don't get to hear it very often!
10) He's a hard worker - when something needs done, he does it - he's helped us move and never complained!
I miss him and the rest of his family very, very much and am looking forward to when they come home again! 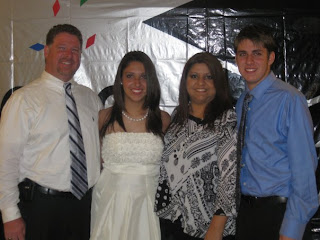 The next brother is Jeff.  He and his wife, Nora, live in Indiana with their two children - Brittany and Brandon.  Jeff is a high school principal at a Christian School.  Ten Things about my brother Jeff:
1) He is fantastic at what he does - he is so good at working with people and running a program to its fullest potential.
2)  I have to say that Jeff is very intelligent - I would place him in the "genius" category.  When I was in grad school, I would call him and ask him to explain my statistic class notes, which he could do easily.
3) He's a great teacher - whether speaking in church, teaching a class or seminar, or just talking one on one, he's very good at explaining things in an understandable way
4) He's fun - he's got that sly sense of humor; very subtle so no one knows it's him . ..
5) He's Godly and follows God's leading
6) He doesn't give up - even when life throws him lemons, he doesn't give up.
7) He's tough - I don't think he feels pain, seriously.
8) He's kindhearted.
9) He's a great father - he has two wonderful kids who I think agree!
10) He's level headed - he is not an over-reactor (is that a word?) 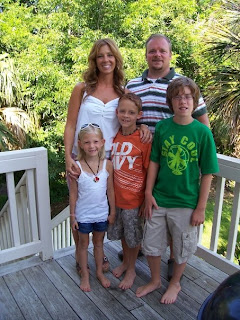 Last but not least is Ken.  Ken and his wife, Lynnette, live in Michigan and have three kids, Braedon, Seth and Kate.  Ken is the preacher. Ten things about my brother Ken:
1.  He is a great preacher - sometimes, when it is your sibling, it is hard to listen to them preach, but Ken has really become an awesome preacher.  I wish I could hear him more.
2. He's a caring person, wanting to make sure others are happy.
3. He's a lot of fun.  Seriously, he really is - he makes us all laugh.
4. He's a great dad - just look at his kids :-)
5. He's a Godly man - he really follows what God teaches. (I guess that would be practicing what he preaches!)
6. He's likable.  Because Ken and I have always lived fairly close to each other, I've had more opportunity to see this play out.  "Everyone" always seems to like him.
7. He is a worker - whether it be to help other people or to finish his own house, he isn't afraid of a little work.
8. He is outgoing - he isn't afraid to talk to people.
9. He has a ton of energy, even in his "old" age - I've seen him as a camp counselor, youth pastor and now as pastor - that energy always carries through.
10. He's kind - in the way he treats both friends and family.

I could say a lot more about all of my brothers but I don't want to bore you :-)  I will say that when we are all together, we laugh and laugh.  If you looked in the windows, you'd probably think we were crazy.  But isn't that what family is? Crazy fun!!!  I'm so thankful for my siblings - I know that no matter what happens in my life, they will always be there.  We may not talk often but we are always there for each other.
Posted by Jackie Koll at 7:10 AM No comments: