I'm gearing back up to tackling some of my hundreds of Pinterest ideas I've pinned onto various boards.  Recently I started going through all of my boards and cleaning them out.  One of four things happened:
1) The item was deleted if I've tried it and was not impressed with it or did not like it.
2) The item was moved to the board I have for "Things I've Successfully made" if it was a success.
3) The item was deleted if I decided it was dumb.
4) The item remained on the board OR was moved to the right board.  I even managed to delete a few boards because they didn't really mean anything anymore.

As I was working on that project, I found ideas I want to try again so here goes!

The first idea is from my For the Home board and is a new way to soften clothes.  I am not one to hang clothes outside on the line to dry OR to leave out the fabric softening sheet because I hate "crunchy" clothes.  Have you noticed how expensive good dryer sheets are now?  It's just crazy.  When I saw this idea from Mattern Family Adventures, I decided to take a chance. 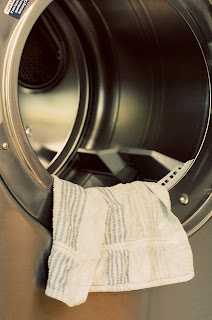 This is wonderful.  I picked up a $0.98 hand towel at Wal-mart and soaked it in the liquid softener - really that just means pouring enough softener on the towel in a bowl to get it good and saturated.  Then squeeze out as much of the extra as you can and hang it where ever - I hung it over my banister in the kitchen and the whole house smelled fantastic.  My husband even asked me where I got the new air freshener because it was awesome.  Mine was completely 100% dry within about a day and half (but my kitchen is really hot so I'm sure that helped!) I washed two loads with it already and the clothes are soft and smell sooooo good!  I'm really impressed with this idea and plan to pick up a second towel - and then the plan is to "make" a new towel softener at the end of the month to replace it by the first of the month.  Considering the fact that I go through a box of softener sheets a month at close to $5.00 and I spent $5.00 on the bottle of liquid which will probably make, I don't know, maybe 10 or so towels . . well, that's a lot of savings!!

This second idea is also from my For the Home board and just seemed way too easy.  I have no were to really store the boxes of aluminum foil, cling-warp etc so it just gets thrown under my kitchen sink.  Then I saw this idea from Chica and Jo and it was just too simple not to try. 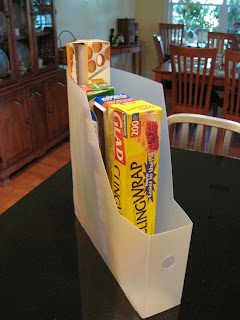 It just so happened I was cleaning out stuff in the basement and had one of these holders.  I already love it.  It's easy to grab from the cupboard and sometimes, honestly, it sits in the corner on the counter and takes up hardly any room but keeps all of that stuff so handy!  I love this idea :-)

The last idea I'm working on right now is an idea from my Craft Board and is for the boys.  The idea comes from I heart Organizing and has been on the back burner for awhile but now that we are getting ready to start preschool, I want this file organization system in place so I have a place to store all of those special projects. 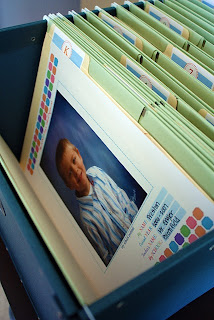 I'm still searching for the perfect file box - I plan on picking up the file folders/hanging folders this weekend and well prepare that much.  I may just get the inexpensive $4.00 file bin from Walmart for now and get something more sturdy later when I find exactly what I want.  Once I start using it, I'll try to remember to post a photo :-)

I feel good about these new ideas I've tried and had success with . . not to go through some more boards and find more ideas!