We had a wonderful Easter and I hope all of you did too!!  Actually, our whole weekend was wonderful.  Saturday I was able to take off at about 9:00 and head into "town" for a day of Scrapbooking.  I actually took advantage of my trip and started the day with a little shopping (to finish up some Easter Shopping) before going to the crop.  I then worked all day on my main goal which was to finish up June 2013 (our vacation to Mackinaw) and I did!  I also got half of July done.  Darryl got to spend the day with the boys and I heard they had a great time!!

Sunday dawned a beautiful day!  We started our morning by heading to church for Easter Breakfast.  Now, one of Josh's favorite things is to eat at church.  I have no idea why but he does - it is HUGE for him and this was extra fun because it was breakfast!  They got their fill of Pancakes, Sausage and Krispy Kreme donuts!!  That was followed by a great church service where I was able to use my ministry and sing in an ensemble as well as sing a solo which was just great.  I love to sing (even though, yes, I get nervous still after signing for over 30 years in front of people!) Once church was done we headed to lunch.  I know I left you all hangin' last week as to what we were doing but after much thinking, and re-thinking an idea popped into my head that was perfect.  We went out to the Chinese Buffett!!!  Yes, Chinese on Easter!  We got there before the regular church crowd hit so it wasn't busy and the food was good.  The boys love it because they can pick food and get ice cream when it is done ;-) 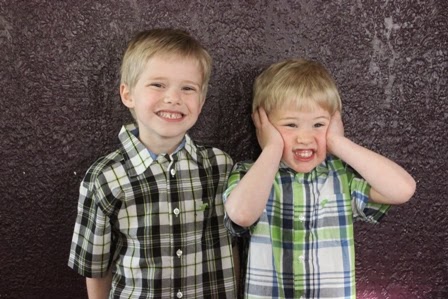 Josh and Nate :-)  Trying to get them to do "normal" smiles is a tough job at this age! 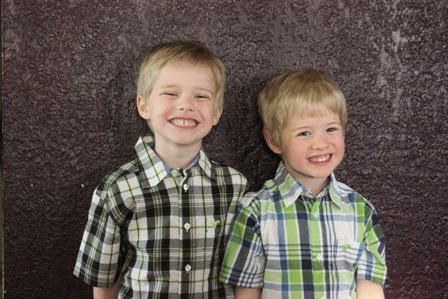 After dinner we headed home for all of our Easter fun but we took the long way home with the windows down to enjoy the fabulous weather! 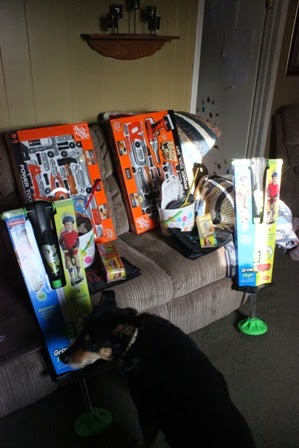 Their "Easter Baskets".  We like to keep church first on Easter Sunday so we don't put out the Easter Baskets first thing.  Instead, as the boys head out the door, I quickly set up their stuff so it is there when we get back from church.  The Pogo sticks I had actually bought at Christmas but they had enough stuff so I put them away for Springtime.  Their main gift was some new tools and I bought them each a Thirty - One Tool bag that said "Josh's Tools" and "Nate's Tools".  It was a huge hit!  It was funny though because Nate kept saying the Leprechan came while we were gone and left his Easter Stuff. 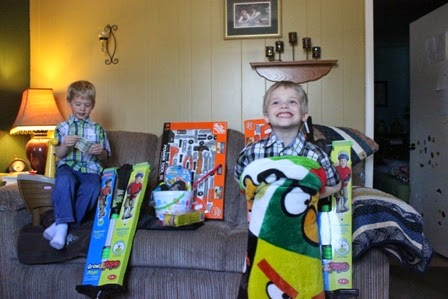 Again trying to get them to stand with their stuff was useless.  This is the best I could get! 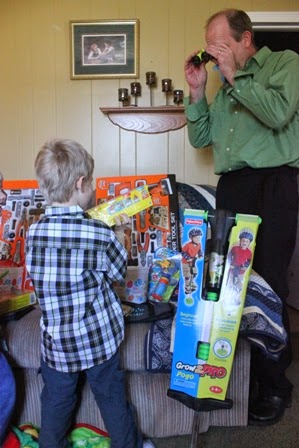 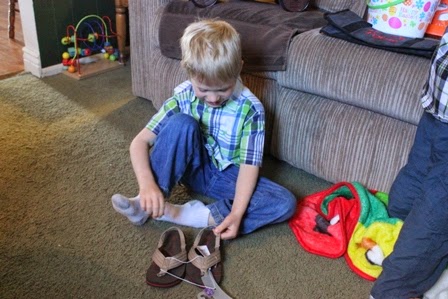 The boys also got some new Flip Flops for the summer, a pair of binoculars that I had picked up last summer on clearance as well as a Bubble Blower that I bought last summer too.  We had also found some bug nets at Target for $1.00 each and of course, some candy. 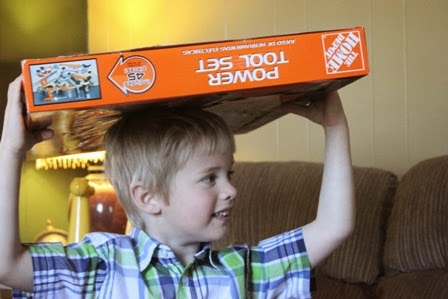 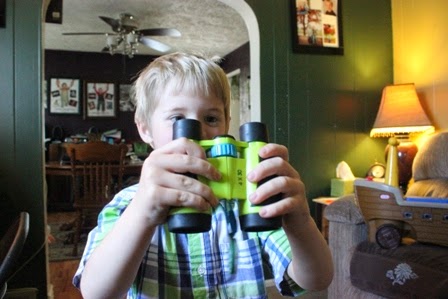 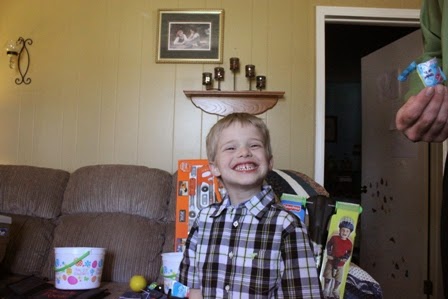 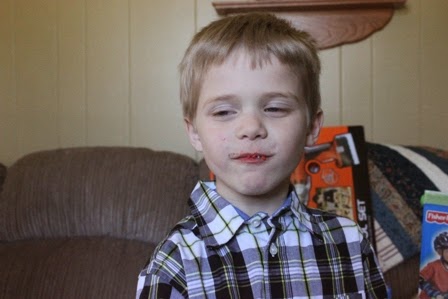 Josh trying Pop Rocks for the first time.  He actually liked them which kinda surprised me ! 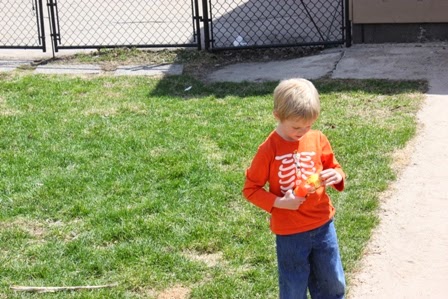 Nate is a Bubble King.  He loves bubbles so he headed right out side to use his new Bubble Maker.  (Yes, a Halloween shirt on Easter but he loves his "bones" shirt!)

After enjoying their gifts for awhile, we got out the eggs to decorate. 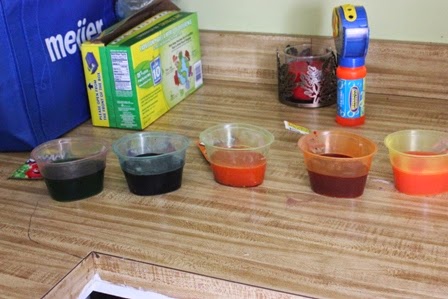 Like last year, I used Kool-aid to dye the eggs.  It smells good and washes off pretty easily. 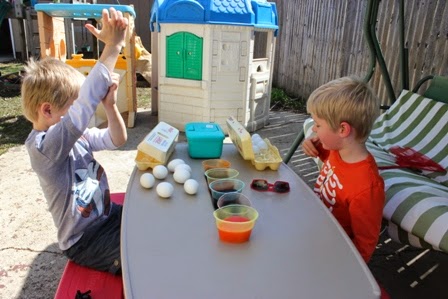 "Decorate" might be too strong of a word.  How about, "dip and be done".  Next year I think we'll be ready to get more creative ;-) 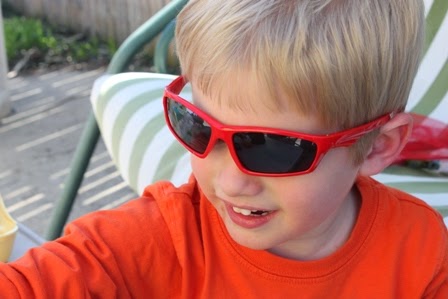 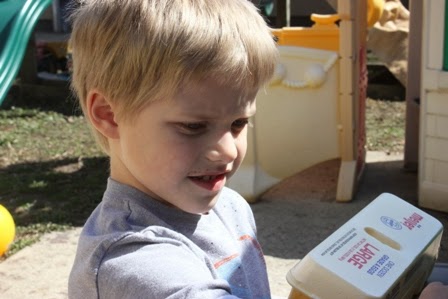 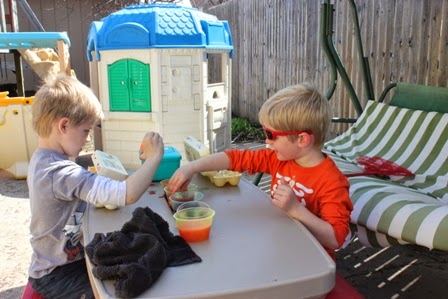 Then it was time for the Egg Hunt! 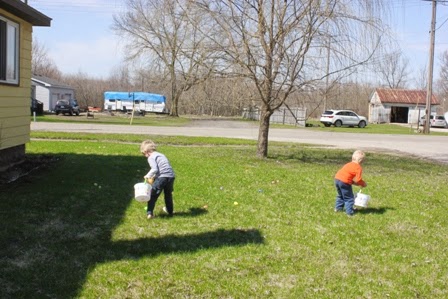 I "hid" all of the eggs in the front yard.  Originally, I had done them in groups of two but then gave up and just figured it could be a free for all. 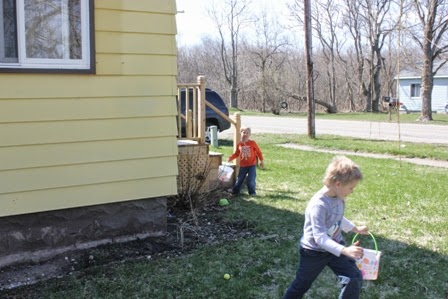 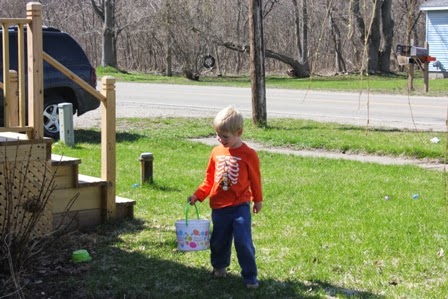 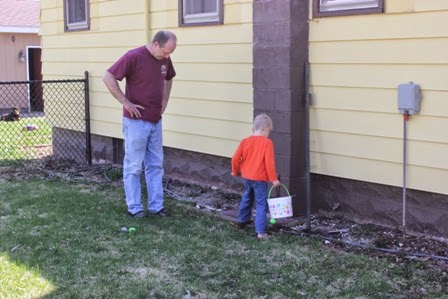 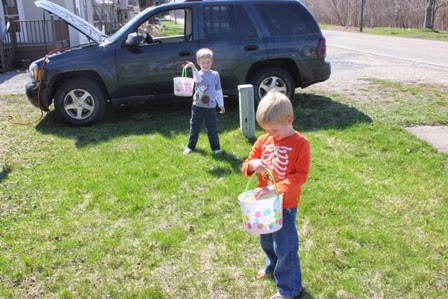 This, again, was the best photo I could get of them with their loot!!!  They were hoping for money in their eggs but I just did some candy.   Honestly, they have already forgotten about the eggs (and the candy) . . .maybe next year I will do change in them instead.  Who knows!

Finally, we just had some Bubble fun! 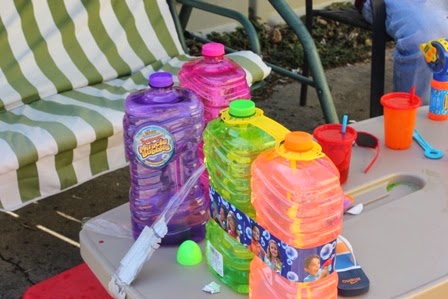 Bubble's anyone?  Everyone laughs at me for buying all of these but Walmart had a great deal and, we've already gone through 1 and a half bottles! 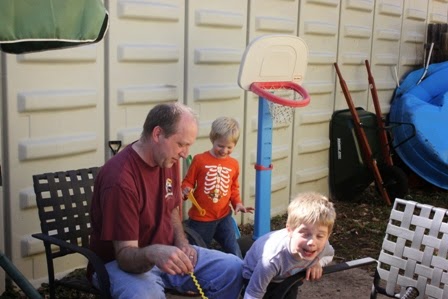 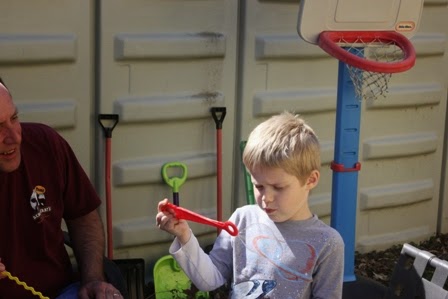 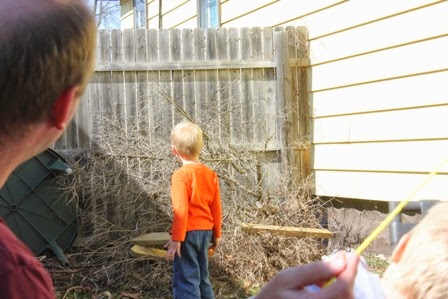 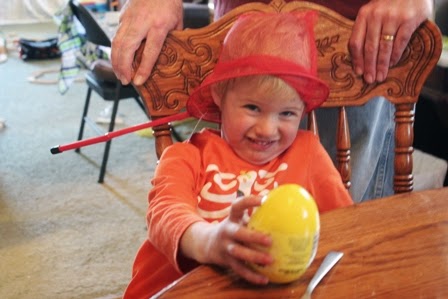 
So, that was our Easter!  Always a fun day!