This is only a week late, that isn't too bad, is it?  LOL  It's been a very busy week to say the least.

We had a great Easter!  Easter is the one holiday that we tend to stay home and just celebrate with our little family.  Not every year, mind you, but most years.  This year I had to sing at our church so that made our decision for us.

The fun started on Saturday with Egg Decorating.  I came across a great idea on pinterest using this: 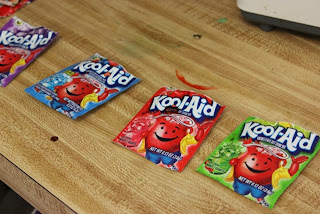 Yep, Kool-aid.  The idea comes from Hey! Jen Renee and was too easy to pass up.  I also figured that my kids are so little if it was a fail, they wouldn't notice :-)   It mixed up much easier than the dies and it smelled SOOOO good.  The blog author gives a great color tutorial so you can see what each color of Kool-Aid looks like. 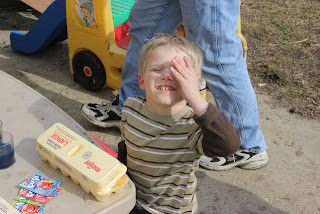 It was a sunny, beautiful day, thus the hands over the eyes in these photos. 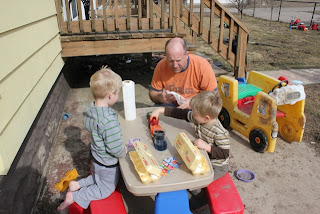 The weather made it fabulous for egg decorating - we could do it outside.  I boiled a total of 12 eggs and gave each of the boys six. 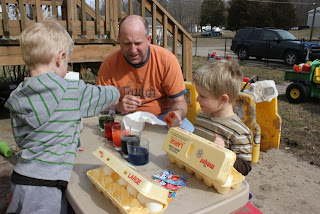 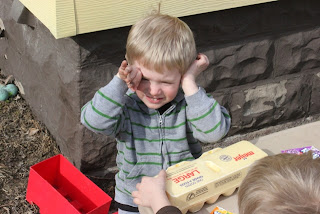 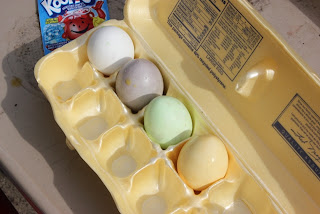 See, the Kool-aid really does work!  The longer the egg stayed in the mix, the better the color. 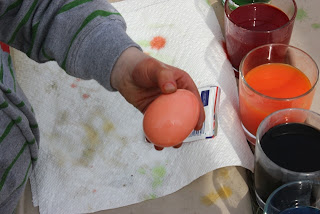 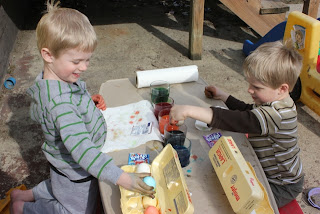 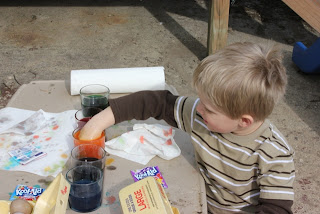 Sunday morning dawned dreary and rainy but doesn't that symbolize Easter?  (On a side note - during Pastor's message he talked about how fitting it was to wake up to a morning like that; then as he was talking about later in the day when Jesus arose - the sun starting shining through the church windows -it was so awesome!) We had thought about going to the Easter Breakfast at church but 3 1/2 hours is a little long for the kids at this point so instead we hung at home until time for church. (Breakfast, Sunday School, Church . .. ) 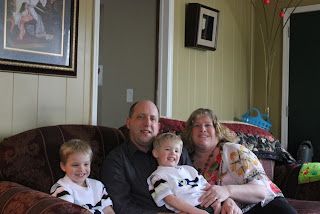 Our Family at Easter.  My hair looks really weird here . . not sure what is up with all the flatness. 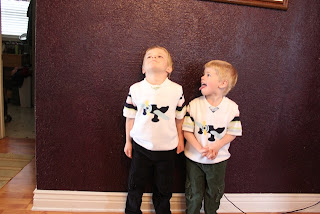 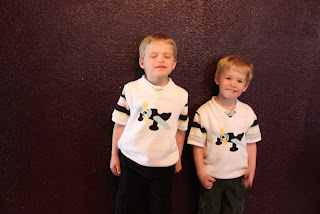 Trying to get pictures of the boys is a chore right now - they prefer to make faces - which is fine because they are cute anyway :-)  Don't you love those sweaters?  I had bought them shorts; I have no idea what I was thinking!  :-)

At church on Sunday, I had the privilege to sing twice.  First, I sang an Old Quartet song by Brian Free and the Assurance called I'm doing this for You.

Then, I also was able to sing in a ladies quartet and we sang another old song called The Easter Song

I had to share this photo too - the boys made these awesome crafts in Kids Korner during church. 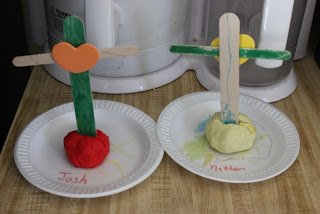 We asked the boys about the crafts and they told us that Jesus got hurt on that cross for us. I love that they are learning about Jesus and the Bible.

When we got home, we gave the boys their Easter Baskets.  It's important to us to save the "eggs and candy" for after church because the real reason for the day IS Jesus Christ.  Not that we won't do things differently when they are older but right now, it is the way we like to do things :-) 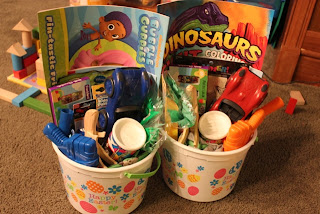 I must admit, I had so much fun shopping for these baskets.  Most of the stuff was $1.00 items from Walmart with the exception of new flashlights and those race cars. 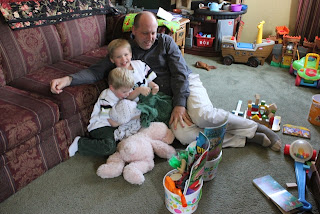 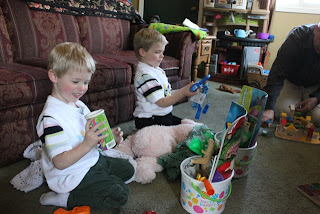 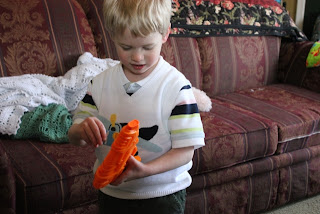 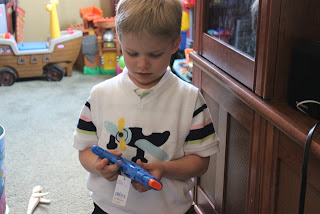 The squirt guns have been huge hits - they play with them in the bathtub right now since it is a little chilly to play outside with water.

Right after this, we had a snack of Cheese, Crackers, Salami and fruit to hold us over until I could get dinner ready. 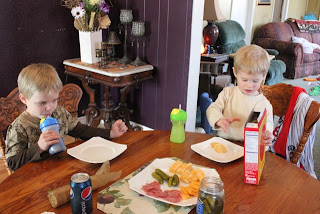 We were all a little hungry :-) 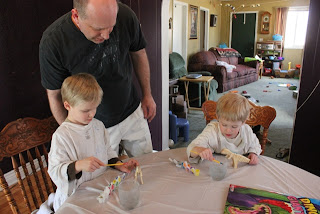 While I worked (and worked and WORKED) on dinner, the boys and Darryl worked on painting one of their new crafts they got in their Easter Basket.  I love Hobby Lobby - they have such great kid crafts! 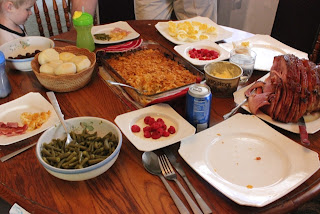 FINALLY it was dinner time - Ham, Cheesy Potatoes, Rolls, Green Beans, deviled eggs and Dessert.  Now, lets keep it real, ok.  I spent 3 hours in the kitchen on Easter.  I will not do that again.  Next year we are either going to just do KFC OR we'll get sides from KFC and I'll do the Ham in the Crock Pot.  This was WAY too much work!

We ended our day with an Easter Egg Hunt. 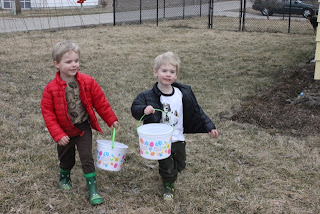 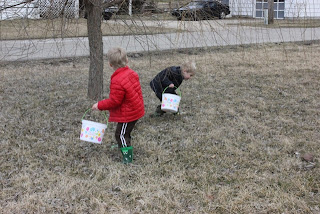 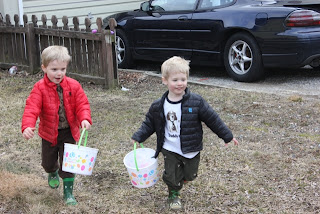 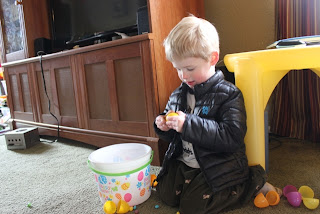 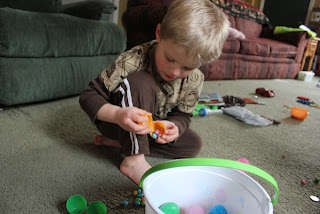 What did the eggs contain?  Some had money and some had jelly beans.  They boys loved opening them :-)  I have a few different ideas for next year including hiding only two colors of eggs and the boys have to find their own color :-)

We had an awesome Easter - it was a great time with the boys and they are still talking about the things we did.