Our oldest, Josh, turned 4 on October 22nd.  I've waited to post about his birthday because part of his gift we just did this weekend.  So, here is the full story in pictures!

On Monday, the 22nd, we had a small party with two sets of Grandparents.  I couldn't believe how excited the boys both where to have people over.  The funny thing is that they kept saying that Uncle Ken was coming over (one of my brothers) and then they would mention my other brothers too . . .we had to break the news that those Uncles were not coming :-( 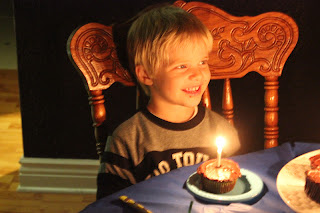 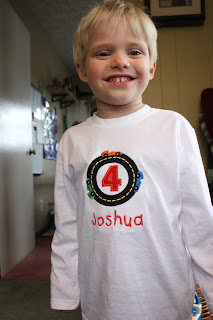 Don't you love that shirt? I ordered it from Sassy Pants Designs and was beyond thrilled with it.  The quality was fantastic, the price was perfect and the owner of the shop was so great to work with - I will be putting in a special request soon for another birthday :-) 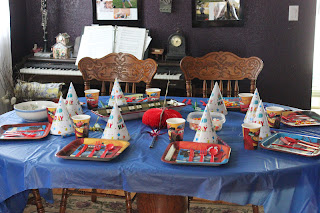 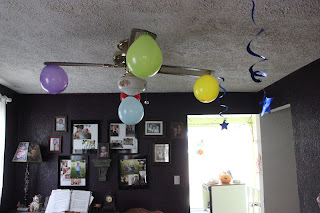 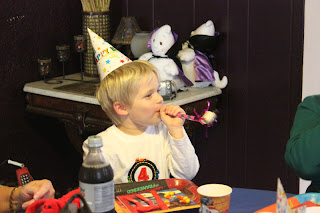 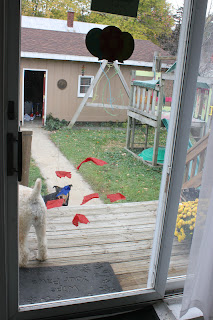 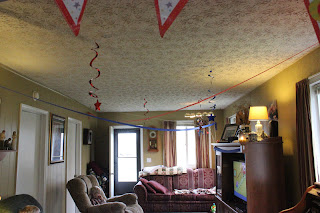 Decorations for this party were pretty simple and Josh helped.  He put the tissue paper on the slider door and he picked where to put the streamers in the living room and also helped to set the table.  When it was almost time to eat, he even went and gathered extra chairs that were needed.  (Then he told my mom that he had to rest because he was so tired HA)  He was SOOOO excited to say the least. 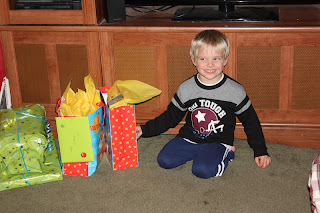 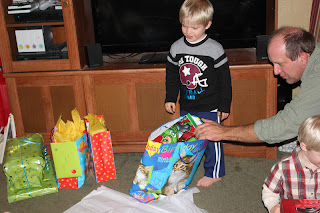 Josh was overwhelmed with his gifts - he just wanted to open one after another.  I will say thought that he has played with everything since his birthday and really enjoys all that he got that day.

Now, Josh specifically asked to go to a hotel and swim in a pool for his birthday  We decided that this would be something fun to do (which is why we did not have a big party like we normally do).  I went onto Priceline and "bid" on a hotel.  I was able to get a fantastic hotel for at least half of the normal price.  We got up on Saturday morning, the 27th and started with some brunch.  Then we loaded up and headed to town to go to the Zoo Boo. This is something we have never done and it was so fun!  The weather was perfect - the sun made it warm enough to be comfortable but there was a crispness to the air making it feel like fall. 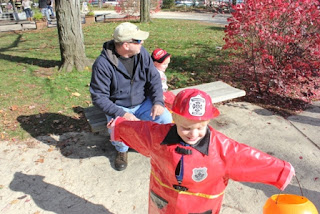 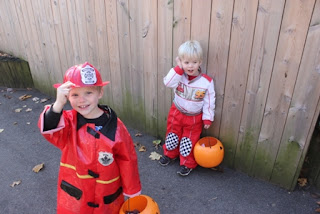 I tried to get some really good photos of ALL of my boys together but let me tell you, trying to get moving targets to stand still AND stand by each other just wasn't in the plans.  This is the best I could do of my Fireman, Race Car Driver and . . Husband :-)  There was a treat trail in the zoo where they boys got lots of treats plus we walked through the zoo.  There is a new area that just opened that we walked through - right now it is just a scenic pathway through what will eventually be the area that houses the big cats - it was very peaceful :-) 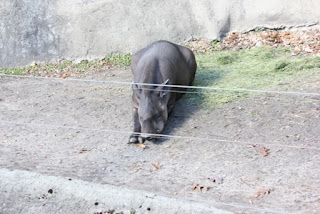 Do you know what this is?  I asked Josh and he said it was  a Hippo.  Are you going to tell him he's wrong? 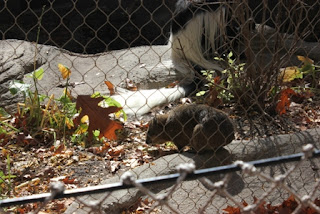 After the zoo we went to dinner at our favorite Mexican Place - Beltline Bar (it is really a restaurant but it is REALLY old and was originally a bar . .. we aren't bar people :-) )  When we walked in, Josh looked at the hostess and said, "I want a Quasidilla to eat please" HA!  Then when the waiter came to get our drink orders (Just water and pop!) Josh told him too :-)  Apparently, he knew what he wanted.  We ate chips and salsa like no body's business and enjoyed a fantastic "dinner" at 3:30.

We then went and checked into the hotel.  Now, here's the one thing with Priceline . . because I chouse 3 star hotels or above, you are guaranteed a pool.  Our hotel did not actually have an indoor pool but it has several "sister" hotels and we could go to any one and swim.  Needless to say we drove down the road, changed and got in the pool.  The more than slightly cold pool :-(  We did actually stay for almost an hour and had a ton of fun .. .and then walked to our truck in just our bathing suits and bare feet because there was no place to really change (as we figured out after we got there) . . .yes, it was 40 degrees and cold. 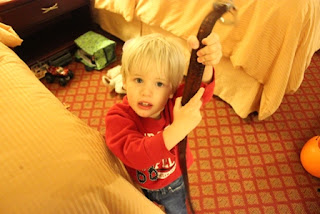 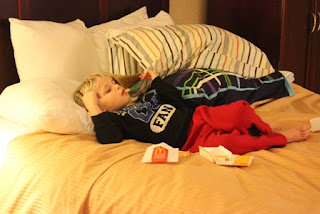 We had planned to stop on the way to the hotel for chocolate milk (the boys before bed snack) but there was no way we were going into a store in our bathing suits so we pulled in to McDonald's to just get milk.  The boys begged for Chicken and Fries so we gave in . . little did we know they were STARVING !  Notice Josh is reclined on the bed eating his food?  They both ate every last bite of their late night snack, got PJ's on and went to bed.  They were tired.  Now, once they were asleep, Darryl made a food run for us and got us Checkers burgers and fries - oh, I wish we had a Checkers closer to home!!!  There is nothing like a burger from Checkers.  One perk of this hotel was free pop.  Yep, they had a soda machine (fountain style) in the lobby and, thankfully we were just down the hall from the lobby so Darryl made several trips to get us drinks.

We all slept in on Sunday until about 8:30, which was great.  Then we headed down the hall to breakfast.  Now, in May when we went on vacation, doing the Continental Breakfast did not work well at all.  The boys couldn't quite handle all of the "excitement" and we ended up eating our room the other mornings.  They did fabulous this time.  I did bring pop tarts  for them to start with and then Josh asked for donuts and cereal and wouldn't you know it - they had Fruit Loops (aka "Soup Soups")  Plus orange juice and milk.  Oh, and bacon.  Lots and lots of bacon HA!  They entertained a couple next to us . .. actually several couples. . .and all was good.  I was very proud of my boys.

The next stop on our weekend was Toys-R-Us.  Every year we take the boys to do "pre-christmas" shopping.  This lets them show us what they really like.   Josh has still been talking about a couple of specific things so I think we know what to get him!

We had a special Surprise for Josh - we took him to the viewing park at the Airport so we could watch the planes land and take off. 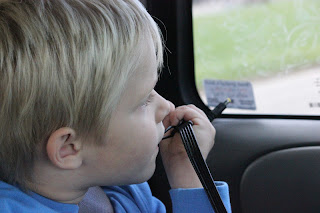 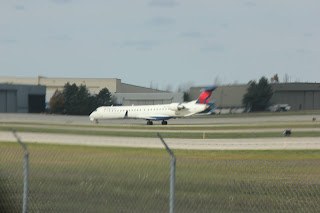 Yes, it was a HUGE hit :-)  We left the park and went to lunch at Bob Evans.  The boys had gotten coupons for free meals so it was the perfect place to go :-)  It was funny because the boys knew exactly what they wanted so I asked them if they normally get that with Papa and Nana and they said YES!  Then Josh said, "I miss Papa and Nana".  Notice the connection to Bob Evans? :-) LOL   Just so you know we aren't perfect, Josh started to throw a fit in Bob Evans over a french fry so Darryl picked him up to carry him out and Josh screamed, "Mama Help me, Don't let Daddy hit me".  Seriously.  Talk about wanting to crawl under a table!  The simple truth - we've never hit our kids.  Shoot, we don't even spank because it makes ME feel bad - I try to do other things for discipline and thankfully God gave me kids that respond to those things!!

Just a couple final photos for you of the Birthday Boy 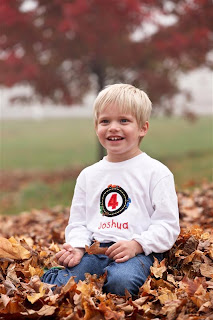 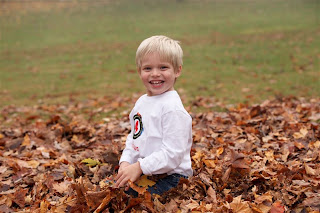 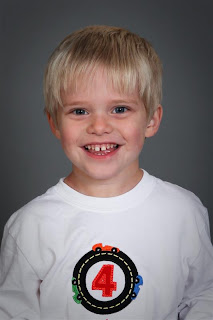 Hard to believe that this little guy joined our family 4 years ago - he has brought so much joy and happiness!  Such a great kid, if I say so myself!