The weekend of our vacation (the REAL final vacation post)

We still had a few days off once we returned from our travels to Mackinaw City.  I'd love to say that we did some wonderful "vacationy" things on Saturday and Sunday but that was just not the case.  For both Darryl and I, our focus on Saturday was to finish up some things.  I worked all day unpacking, doing laundry and cleaning up STUFF.  I had planned to clean and sort and organize toys and other stuff before we left on vacation but it got really humid the days before we left so I did not do that project.  Thankfully, the weekend we came home, it was cool and, even though it was a little humid, it wasn't too bad thanks to the overcast skies.  I went through all of the toys and cleaned stuff out, reorganized and cleaned the boys room and make sure all of the toys "matched".  Not to mention grocery shopping, food prep, and cooking!  Darryl, on the other hand, worked on the deck project and completed everything he planned to get done.  The deck is super close to being complete - just some railings are needed :-) 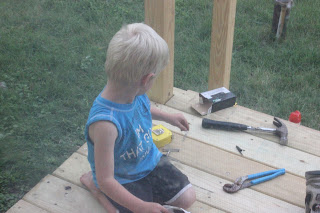 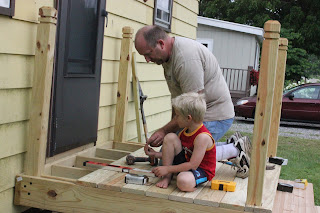 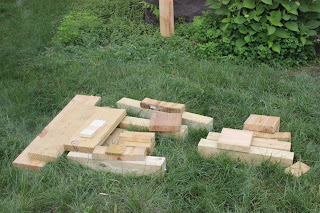 The boys built a deck out of scrap wood - they were very proud of this little project :-) 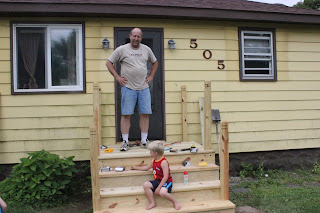 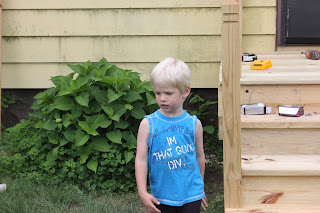 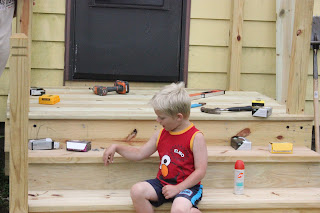 On Sunday we relaxed and really didn't get moving until afternoon.  I got up with the kids (who were up early) but when Darryl got up at 9:30, I went back to bed and slept until 11:00 and then read in bed until 11:30.  No interruptions - it was awesome.  We had a simple lunch and then went outside to the garage to do some minor cleaning.  Just trying to organize a few things and get the junk out of there.  We also loaded up months worth of pop cans to return.  Once done, we headed out to run errands - take the truck to the shop for repairs, then we returned the pop cans and, with the money (we had LOTS of cans) we used a small part of it to get dinner - Darryl's "treat" HA!  He was going to grill but it was already after 5:00 and kinda warm out so he said, "lets just go to McDonald's" and I have to say, I did not argue.  It was nice to not have to do the clean up after dinner :-)

And, as a side note, our truck is all fixed.  We had a wheel bearing go bad which was repaired and they also found that something with the braking system was sticking making it drag really badly (and get awful gas mileage.)  It was a simple $25.00 fix -imagine that!  So now, the truck drives like brand new and we love it once again.  :-)  I mentioned before that next year, I will budget about $300.00 in our vacation budget for vehicle repairs because it always seems that once we return from a weeks vacation, our truck has to go to the shop.  If we don't need it, well, then we can do something fun with that extra money :-)