To catch up on all of our summer fun, just click HERE.

So to start out week 10, I had made all of my plans and even did the prep work I needed for this week.  It still didn't go as planned though - it was more directed by my boys which is actually a good thing.

Monday - Our Summer Fun activity today was a trip to the doctor ;-) We had to drive into town to the big hospital to see an Orthopedic Doctor for Nate and then run a few errands.  It's actually a fun thing for the boys to be out, ride elevators, and play in a different spaces then they normally see.  Having never been to the Children's hospital I didn't know what to expect so I packed toys. Guess what?  It's a Children's Hospital so everything there is for . . .children.  It was perfect.  Basically, Nate has something that is called in-toeing because the ball that fits into the hip socket doesn't quite fit right.  It is something we first noticed back when he started walking and, at that point his walk was impacted pretty badly but it has improved a lot over the past year and a half.  The doctor did x-rays to make sure that it was doing what is supposed to do . . and it is .. so he doesn't need braces or even therapy.  This normally corrects itself by the time the child reaches ten . . .and then . .she told me that often kids that have this are faster runners HA!  We go back in a year for an appointment unless it has improved to the point we feel he doesn't need it.

Tuesday - Today's fun . .. Nate went to the dentist!!  Again, it is just fun for the boys to get out of the house.  Nate did fantastic at the dentist but we did learn a couple of interesting things.  One, you may recall me sharing photos and talking about Nate taking a hit to the front teeth and then his tooth turning gray.  The x-rays show that there are dead spots in both front teeth - one worse than the other.  Basically, it might never do anything more then it has now and he'll lose his teeth eventually OR they could continue to die and become abscessed - then they will have to be pulled.  We are praying that doesn't happen :-)  In the process of looking at the x-rays, the dentist showed me his adult teeth that are sitting up there in his gums . .. and most of them are turned sideways.  Nice.  The dentist laughed and said I had better start saving my pennies now for braces.  She also mentioned that in some cases as severe as his, they start the process when they are as young as six.  The plan is to continue to watch them through the x-rays and she'll make a decision once he reaches that age on what to do.  Who knows, maybe they will straighten out ;-/

I did get some fun photos of the boys outside in the afternoon though. 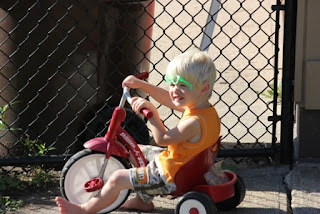 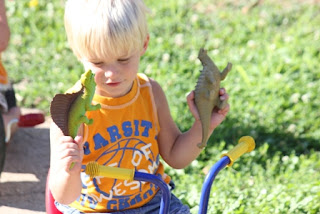 Wednesday - I had my supplies all ready to go but, the boys wanted to do puzzles all morning so that is what we did - lots and lots of puzzles :-)  Plus, I got these brought to me: 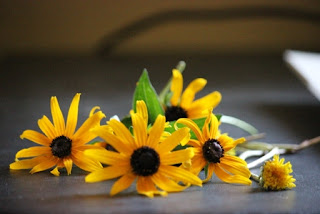 My boys love to pick me flowers  - aren't they beautiful??

Thursday - So today was kind of rainy - the nice rain that the boys love to play in, so I let them do just that.  I had originally planned to get out a game that we hadn't played yet but when I got it out and started looking at it, I realized it was kind of . .. dumb so the rain was better anyway.  They played for a good hour outside in the rain with their matchbox cars :-)  Once they came in, we had a special treat!! 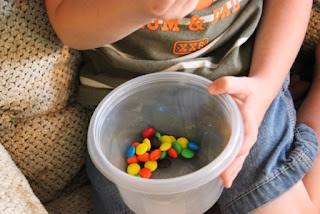 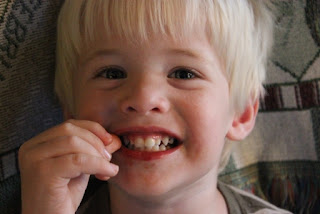 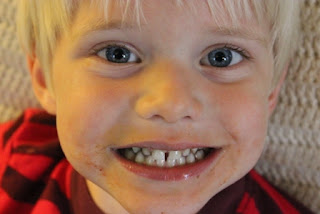 Friday - I don't even know why I ever plan anything on Friday HA!  It was a cold, dreary, rainy day so we did a lot of reading today.

I have plans for this week but I also am working on trying to get our preschool lessons ready to go in a few weeks and get the room switch done so . . I'm not sure how much I'll get done this week as "special" things :-)
Posted by Jackie Koll at 8:00 AM No comments: