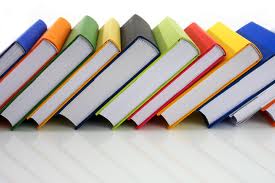 Welcome to another weekly addition of "What I'm Reading".  The time when I share what I'm reading and my opinion of the books as well.

Sons of Thunder by Susan May Warren is the book I was reading when I wrote the post last week.  I finished it up and will say that it ended better than it started.

Synopsis: Sophie Frangos is torn between the love of two men and the promise that binds them all together. Markos Stavros loves Sophie from afar while battling his thirst for vengeance and his hunger for honor. Dino, his quiet and intelligent brother, simply wants to forget the horror that drove them from their Greek island home to start a new life in America. One of these "sons of thunder" offers a future she longs for, the other—the past she lost. From the sultry Chicago jazz clubs of the roaring twenties to the World War II battlefields of Europe to a final showdown in a Greek island village, they’ll discover betrayal, sacrifice and finally redemption. Most of all, when Sophie is forced to make her choice, she’ll learn that God honors the promises made by the Sons of Thunder.

My Opinion:  Honestly, I almost put this book down when I first started reading it.  This is a re-read and, as I started reading it again all I remembered is that it was hard to follow, or at least I thought it was so.  The first few chapters are harder to read because it moves kinda slow but when you move to the store of Dino, the younger brother, and than on to Sophia's life, it picks up a little . It does have an ending that leaves a little to be desired though.  It is one of those books where you are reading and it is getting really good . . .and than it resolves  everything in the last three pages.

My Rating:  When I consider both sides to this review - one being that it did end up being a good read in the end but started out slow and the fact that it didn't really have a good ending, I can really only give it  . . . .*    *   . . .two stars.  :-(  I am planning on putting this book up on half.com as I really don't want to take the time to read it again in the future.  I have much better books to read, including some by this same author!

Happily Ever After by Susan May Warren - yes, the same author as the book above!

Synopsis: God has answered Mona Reynolds's prayers and given her the opportunity of a lifetime: she is about to open her own bookstore-coffee shop, the Footstep of Heaven. Now Mona has no time for love and no hope that a man can ever be the hero of her dreams. But when she hires mysterious drifter Joe Michaels to be her handyman, she discovers that it isn't only in fairy tales that people live “happily ever after.”

My Opinion:  This is a great book.  I would categorize it as a "Knight in Shining Armor" kind of book yet it has a great, almost realistic, story line.  It is a feel good kind of book yet you genuinely are pulling for the characters to find true happiness in the end.  There is a little mystery throughout the book that makes you wonder, doubt yourself, wonder again, and then take a deep breath as you finally figure it out and are glad that you got it right.  I really enjoyed reading this book! 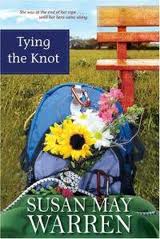 Tying the Knot  by Susan May Warren - you are sensing a theme this week?  Anytime I re-read books, I start at one end of the book case or the other which means I'm reading in alphabetical order by author.  Obviously, I started from the back end of the alphabet! This is the second book in the Deep Haven Series.

Synopsis: EMT Anne Lundstrom is running from her past. But it's about to catch up. She thought she'd escaped it when she moved out of the city and into the quiet town of Deep Haven. She certainly never expected to get roped into helping Noah Standing Bear run his summer camp for inner-city kids. Yet Noah has a charisma she can't ignore, and romance is in the air. But when the very danger she was trying to escape threatens her peaceful haven—and her life—Anne must find the courage to face her fears and embrace the one man who can help her understand her past.

My Opinion: Again, I really enjoyed this book alot.  It is another "Knight in Shining Armor" type book but is so different from the first book in the Deep Haven series, that it is ok.  I found myself, again, cheering for the characters to get things right and enjoyed learning lessons from each of them.  There once again is a little mysterious "under story" going on with this book as well which resolves itself in the end of the book.

My Rating:  *   *   *   . .. Three stars for this one only because it follows such a similar path as the first book in the series - even though it is very different in the storyline, if that makes any sense.  It will be remaining on my shelf too, though :-)

There are a couple of other books in the Deep Haven series that I don't own but I would like to read - I'm adding those to my wish list from Half.com so that I can pick them up in the near future :-)