January 2016 started out with snow.  We are "quiet" New Year's Eve and New Year's Day people.  On New Years Eve, we enjoy some soups for dinner and then have snacks while we attempt to stay up until midnight.  This year, we decided to let the boys stay up.  Josh made it (barely) but Nate lost the battle to stay awake at 11:30.  We tried and tried to wake him back up at 11:58 but he was out cold HA!  New Years Day we hung around home, the boys played in the snow, and also worked on doing some cleaning up from Christmas. 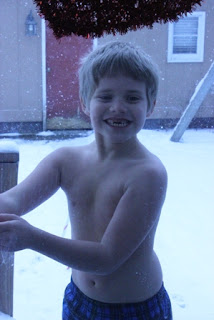 Yes, this is Josh outside without a shirt.  He said he was hot and wanted to go outside.  I think it is incredibly funny. 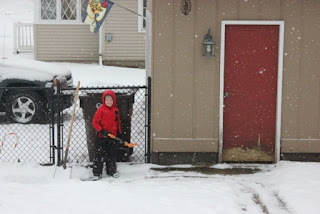 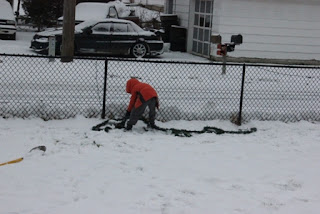 Josh and Nate did both get dressed eventually and went outside to take down all of the Christmas decorations.  They worked hard and took care of it all for me. 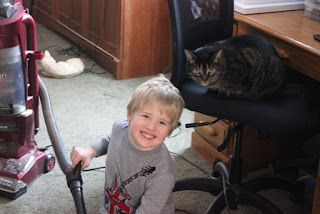 Nate also helped me inside the house by vacuuming up lots of pine tree needles after we took the Christmas tree outside. 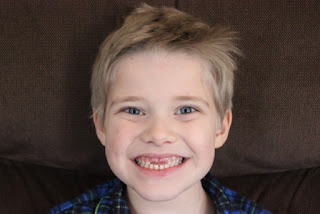 Love this smile!  Josh missing his two front teeth.  I try to get pictures of the boys as they lose teeth so we can remember what they look like at each point! 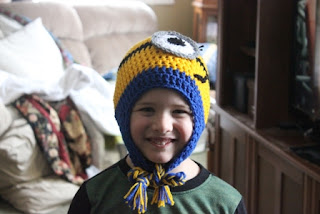 Nate showing off one of his gifts from Grandma LeBeck - homemade hats!  They hats make me laugh anytime either one of the boys ever wear them. 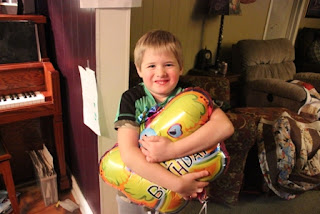 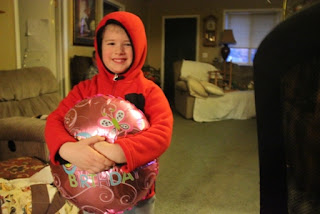 Two of Nate's birthday balloons.  He decided that he wanted to let the pink one go up to the stars so he was hugging his balloons.  The funny thing is that because it was so cold outside, the balloon went up just a little bit, over the neighbors fence, and then sunk to the ground.  I quietly sent a facebook message to my neighbor and asked her to throw it back over the fence.  She did and the boys freaked out because they couldn't figure out how it "found its way back home" HA!

So, January started out quiet as we slowly got back into our routine.
Posted by Jackie Koll at 7:00 AM No comments: