First up is something for the boys room. The inspiration comes from The Keeper of the Cheerios and looks like this:

My boys, much to my husband's chagrin, have many stuffed animals.  The boys talk about their "friends" or "kids" or "dolls" (yes, dolls - I'm trying to stick with kids and friends HA) and actually know when one is missing, which one belongs to which boy and they love them all.  As much as I love this "zoo" idea lets get real.  I'm not about to build anything (math is not my forte!) and the boys don't have room for cages in their bedroom.  So I too the above idea and turned it into this: 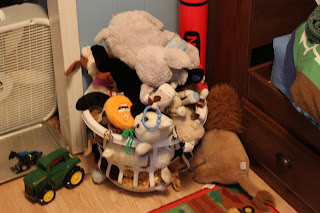 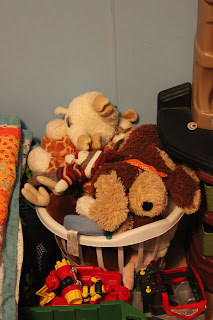 Just laundry baskets :-)  I know - so not as pretty as the inspiration but they fit right next to the boys beds and the boys love playing them - they haul the baskets out and dump out their friends; set them all up and puppet shows for them.  Then roll around in the baskets for fun HA!  I consider this a success! I already owned one basket so this idea only cost me $3.99 for the second basket.

Idea number two is just a photo pinned to my Pinterest Board - I'm not sure where the original idea came from as the link takes you back to a photo board. 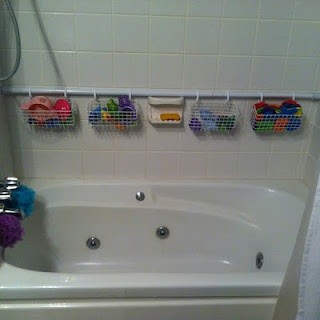 Toy storage in the bathtub!!  We have one bathroom so the toys drive us nuts - for the longest time I've kept them in a bowl in the cupboard and it is such a pain to get them in and out.  I loved this idea but, again, with one shower, this was going to really crowd the adults that take shower (I.e. my husband and I HA)  So I went looking for a similar idea and came up with this! 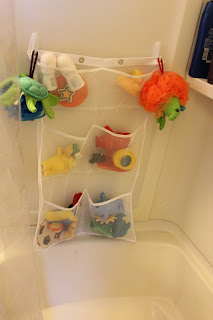 It is actually a shower organizer that hooks on the shower curtian hooks.  Instead I hung some command hooks and hooked it onto those.  This gives plenty of space for their toys, body paints (which they love!) and even a place to hang their scrubbies.  The toys dry out and are keep out of the way since it hangs at the back of the shower.  The best part?  It cost $9.99.  Super simple and inexpensive!

The last idea is something for the classroom and comes from Attempting Aloha and looks like this: 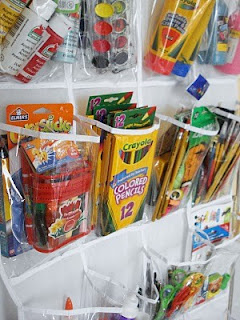 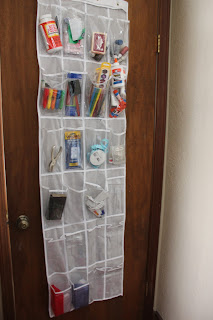 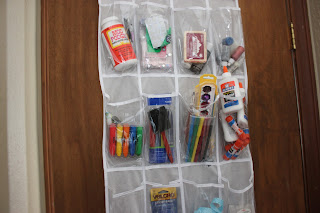 I love it!  This Shoe Holder was $5.99 at target and it holds a lot of stuff.  I keep stuff I don't want the kids to get into in the top two rows.  The other stuff I don't worry about so much.  This really is the perfect storage solution for SOOOO many things!

That's all for now but I'm already working on my February ideas :-)