Saturday was Nate's 2nd Birthday Party and we chose the theme "The Very Hungry Caterpillar" because that is one of his favorite books!

We started out the excited of this party by sending out adorable invitations that I found at LuvBugdesign on etsy. 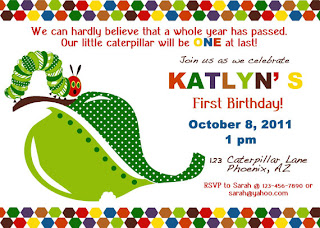 Isn't the design adorable?  I asked to have a photo of Nate added and she did a fabulous job.  I love how bright and colorful the invites are - how can you NOT smile when you look at them?  (Obviously, this is NOT Nate's invitation - it is the photo for the etsy shop!)

For the decorations, I used several ideas/inspirations.  Our main focal point was a giant Poof Ball Caterpillar that hung in the middle of the living room. 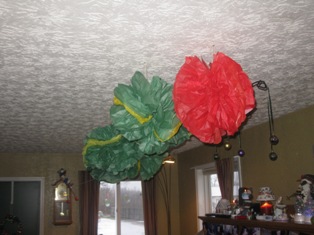 The picture doesn't do him justice (and you can't see his eyes!) but this guy is fantastic.  I found the idea over at Catch My Party and fell in love with the idea so I headed over to Martha Stewart.com for the full tutorial.  I learned a few things.  One, I used a mix of never before used tissue paper and used tissue paper - next time I would buy all new.  It is much easier to fold it when it is all lined up.  The used paper tends to be slippery and want to slid out of the folds.  Two, it doesn't have to be perfect - either the folding or the rounding of the edges - once you "poof" it, no one will every know!  They really are easy to make and make a huge statement in a room.

I used two different sources for the printables I used to decorate with around the house.  First, one of the inspiration parties I looked at was over at Polka Dot and Puppies.  Her party was fantastic and she shared some free pintables to use with the food or just as decoration which stated what the Caterpillar ate each day. 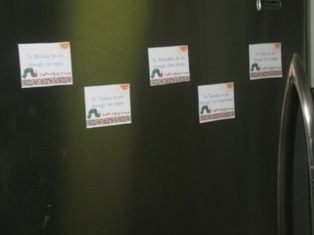 I hung them on my fridge and on the cupboard doors.

Then, I also ordered a packet of items to print from another etsy store called The Party Project.  This pack was designed for me but she has tons of stuff in her shop and it is great quality. 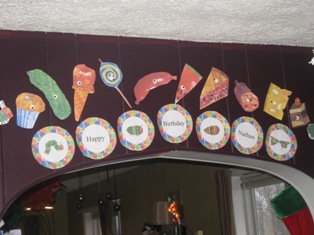 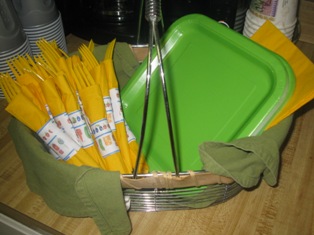 Here are just a few samples - the items above the arch could also be made into a banner but I used them flat against the wall.  Then I used napkin wraps also.  There was banner with Nate's name, pinwheel patterns, party hat patterns, cupcake toppers and wraps and more.

Now for the food!!!  I meant to take pictures of every item but somehow, only managed to get these two shots. 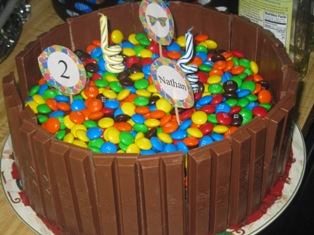 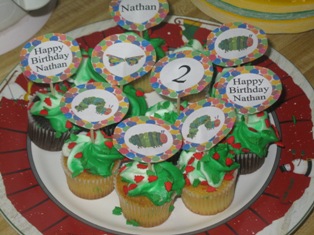 Don't you love the cake?  I found the inspiration over on Pinterest and was looking for an excuse to make it.  It fit in perfectly with the them because the book has dots all over the front and back covers.  My boys always start on that page and say "dot, dot, dot" :-)  All of the food that was at the party came from the book.  The Caterpillar eats through LOTS of food through the week until he gets REALLY big!

On the first 5 days (Monday-Friday) he eats through different fruits such as apples, pears, plums (I could not find plums anywhere!), strawberry's and oranges.  I took all of those fruits plus watermelon, which he eats through on Saturday, and made Honey-Lime Salad from Mel's Kitchen Cafe.  This fruit salad is fantastic and you can use any fruit that you want in it.  This salad was a favorite of Josh's - he couldn't stop eating it :-)  Then, on Saturday, he eats through TONS of things:
1. Chocolate Cake - notice that some of the little cupcakes are Chocolate?  Well, the cake was supposed to be chocolate but when I made the first cake, it totally flopped.  I've never had a cake mess up as bad as that one did so I ended up running to the store and buying a yellow cake mix to use for the cake.
2. Ice Cream - we served ice cream with the cake :-)
3. Pickle, Swiss Cheese and Salami - I made a cheese tray (but I didn't use Swiss cheese)
4. Sausages - We had Bratwurst and I did them in the crockpot - they were so good.  As a matter of fact, my dad said they were the best he's every had.  All you do is brown the brats in a pan on each side.  Slice some onions (as many as you want).  Layer some onions in the bottom of your crock pot, lay the brats on top, and more onions.  Then add apple juice until the brats are covered.  Then cook on low for 5-6 hours or until they are cooked through.
5. Cupcakes - I cheated :-)  I bought those cute little Christmas cupcakes at our local grocery store
6. Cherry Pie - I knew we didn't need big cherry pies so I made these little cherry pies inspired from Bakerella (This is her photo too since I forgot to snap a photo!) 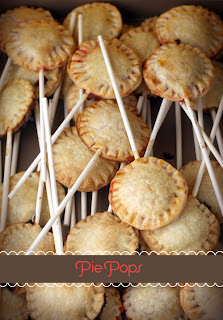 7.  Lollipops - yes, the caterpillar actually ate through a lollipop!!!  I used them as my centerpieces and did a very easy version of the Lollipop Bouquets.  I just used some glasses (they are McDonald's Coke glasses that they have been giving out!), stuffed some tissue paper into the glass and added some Tootsie Pops. 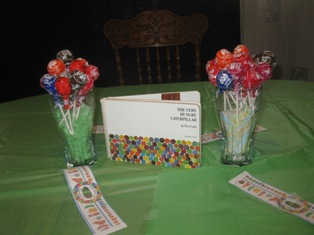 Isn't that fun?  I also used Nate's copy of the book as part of the centerpiece - it is very well worn!

There are TONS of ideas out in blog land/pinterest for more ideas about food and decorations.  Yes, you could really go overboard!

One last food item - on Sunday, Mr. Caterpillar is recovering from his stomach ache due to all he ate so he ate through a leaf.  We had my "Famous" taco salad :-) 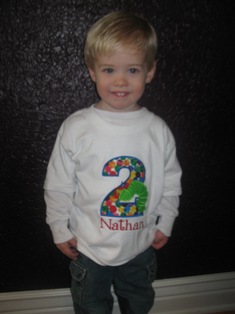 Don't you love his shirt?  I really enjoying picking out shirts for the boys for their birthdays and when I saw this design on etsy.com, I knew it was the one.  SAMEmonogram was great to work with and went above and beyond for me :-)  I was so thrilled to get Nate's shirt - it was just way too adorable!

Because I love games (even though everyone else acts like they don't HA!) we did play a little game.  I just put together a quiz with some basic facts about caterpillars and then they had to try and put all of the food in order.  Games are a great way to get people talking :-) 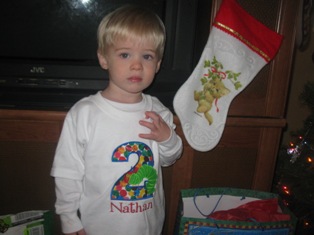 Nate, waiting to open his birthday presents.  Yes, he can be serious! 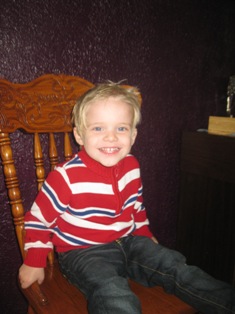 Josh is really loving getting his picture taken so when I started snapping photos of Nate, he had to get in for one too. 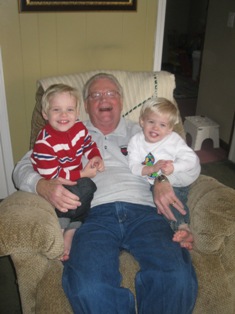 Papa, Josh and Nate - the boys went CRAZY when Papa arrived - they love him very much !! 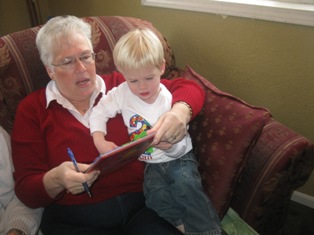 Nate decided to play the game with Nana - I think he really wanted to read the book she was using :-) 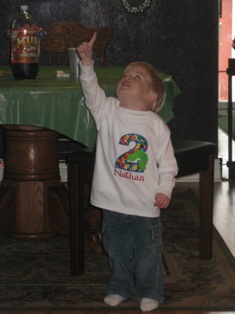 I love this photo!!  He is standing in the dining room pointing up to the cut outs on the wall from the book and naming all of the food items.  I love hearing that little voice. 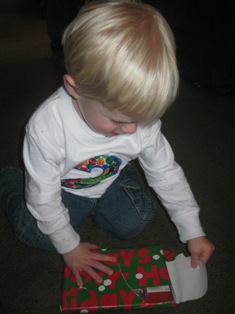 Time to open gifts :-)  This was the movie "Cars" - and yes, we even watched it after every one left the party. 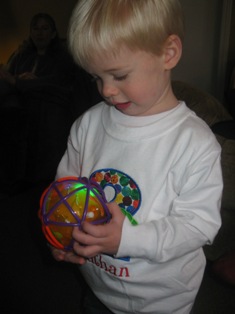 Ok, this ball was the hit gift of the day.  It lights up, spins around and plays music.  Once we showed them how to use it, the boys didn't want to put it down.  As a matter of fact, Nate didn't even want to finish opening his gifts HA!  Nate's Uncle Kel and Aunt Deb sent this too him and he just LOVED it! 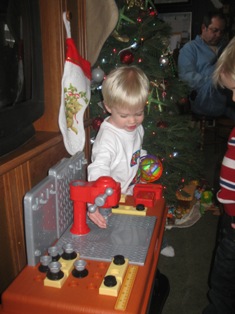 Once we could sneak the ball away, he did discover his gift from Papa and Nana - this great new work bench with lots of tools. 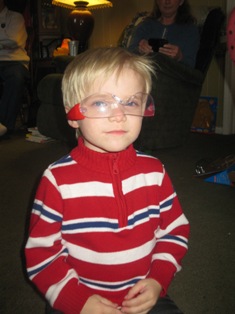 Josh wanted a picture with his "glasses" - the safety goggles from the tool bench. 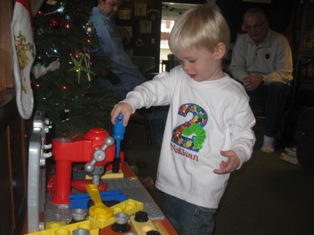 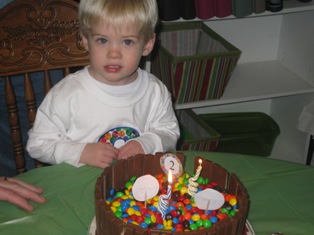 Finally, time for the cake!  We had to keep the boys out of the kitchen after I made it because they kept trying to steal the kit kats off the sides. (Should I mention that my mom and my sister-in-law picked M and M's off the top - so many that when I brought it to the table, there was frosting showing where their used to be M and M's!!!  ) 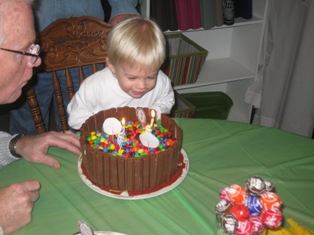 Papa had to help Nate blow out the candles - Nates "blow" tended to go up instead of out HA! 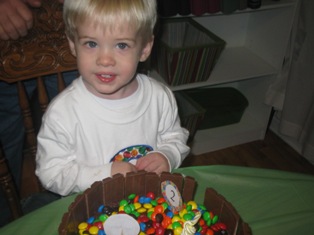 Needless to say this was one happy little boy.  He pulled lots of kit kats off the cake and ate them, licked lots of tootsie pops, and just had an all around great day.  At about 6:00 both boys said "Mom, I'm tired" HA!  So we shifted gears, and started our Christmas activities with their Christmas Eve gifts since, in this house, Christmas Eve was Saturday night but, I'll save that for another post :-)
Posted by Jackie Koll at 10:00 AM No comments: