To visit our first 4 weeks of summer fun click HERE

It's hard to believe that we have just finished up week five of summer.  It has REALLY heated up in this area and that is really impacting what we do each day.  So even though I had specific ideas on my July plan, we totally did other stuff :-)

Monday:  The heat started to climb on Monday so we spent a lot of time inside in front of fans.  Josh and Nate hauled their car mats from their warm rooms to the dining room where they could play cars for hours under the ceiling fan. 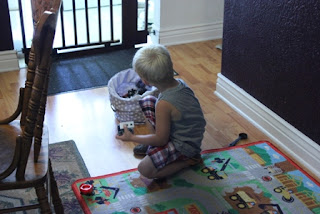 Tuesday:  It got hotter.  So, the boys spent a lot of time going to the basement, killing "spiders" on the stairs (and screaming like two school girls in the process), and then we spent a good hour or so in the hot tub kiddie pool. 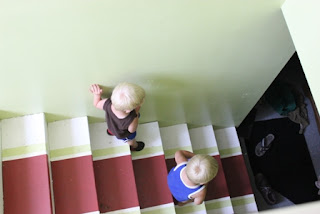 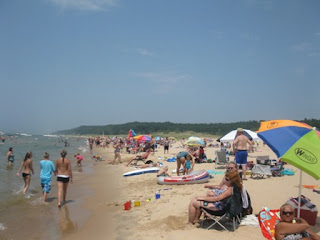 Yep, not so secret on this day!  We were shocked to see it so packed because it never is and we've been to the beach on the 4th before.  The good news is that we walked down the boardwalk, which takes you about 1/2 way to the beach before you hit the sand (which is such a joy to walk in, isn't it?), and there was a small empty spot of beach straight up, right by the water.  We had our own little piece of paradise among crowds of people. 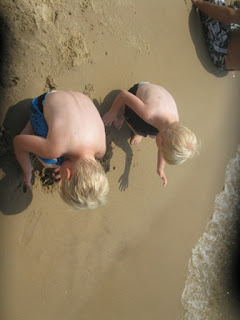 The boys loved playing in the sand, digging holes, and covering me with sand (what? People pay a lot of money in spas to be covered in mud :-) ) 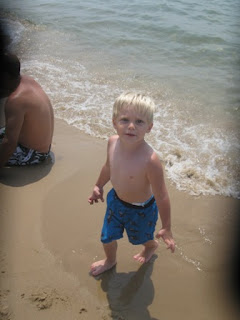 They also loved running into the water.  Either Darryl or I would sit just off the beach in the water and the other would stay on the beach - the boys would run through the waves to who ever was in the water.  Plus we walked out a ways to a sand bar (where it was to my knees) and we sat in the water while the boys hung onto us for dear life and squealed with excitement every time a wave hit us.  Considering the fact that last year they wouldn't even go in the water, this was a huge improvement and so much fun! 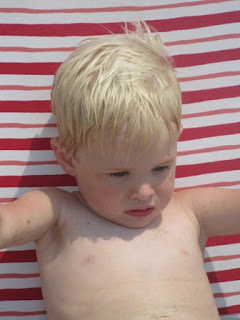 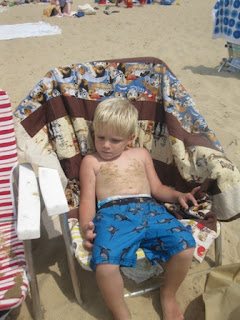 The boys kicking back in our beach chairs, covered in sand and just chillin'.  When we left the beach, we planned to go to Bearnie O's for pizza (our favorite place) but, as we thought might be the case, it was closed.  So instead, we went to McDonald's :-)  No, not out favorite place to go but the boys love it and it was close so it worked out fine.  We had two very tired boys!!

Thursday and Friday - So, I finally said, "Enough is Enough" - the heat has reached record highs and it just isn't fun to be in the house right now.  The boys and I loaded up and headed to my parents house for a few days.  Don't feel bad for my husband - without us home, he is able to pretty much be in A/C all day.  The one downside for him is that his car does not have AC but his Taxi does, any place he wants to eat does, and then the bedroom does.  Rumor has it we'll be in the 80's next week so it should be a little nicer!!   See how I crossed that out?  Plans changed.  I wrote that on Wednesday night before I went to bed, without knowing what was going to transpire.  See, at 2:30 AM our power went off and we immediately had Josh in our room because he doesn't like the dark or thunder.  Darryl got up and 20 minutes later we knew we had to get Nate into our room since it was still cool at that point.  Nate was already soaked from head to toe with sweat.  Well, Darryl left for work and left me to tough it out with the boys and a dog with no power and no air in the bedroom.  It took about 2 hours for the boys to finally fall back to sleep and thankfully, at 6:30 the power came back on.  At 7:30, the phone rang and it was my dad calling to tell me that they had big storms during the night and had no power.  Going to their house kinda wasn't such a great idea since they didn't have air.  I created my own plan and decided that I would take the boys to lunch, to the store and then I had set up a play area in our bedroom so we could hide out there.  While at lunch my brother Jeff called and invited us to his house for the weekend near Indianapolis.  Darryl and I talked about it and decided in addition to the a/c, it would just be fun for me to hang with them since I seldom see my brother and family.  The boys loaded up and headed out.  So, our fun became going to my brothers on Thursday and then on Friday we went to a really awesome Frozen Yogurt shop and we took the boys to see "Brave" - their first movie (and they did awesome) . 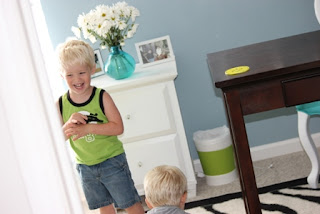 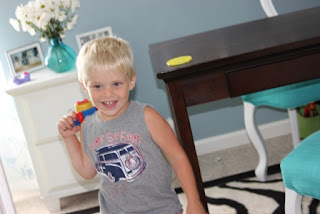 Now, here's my take on having central air.  It is awesome :-)  I love being able to give the boys baths without dying from heat exhaustion, getting up in the morning and taking a warm shower, putting on make-up and doing my hair . . .period.  LOL  (I don't do those three things in this heat - I take an ice cold shower, no make-up and pull my hair up while it is still wet!); I also love being able to sit and not sweat.  If I had central air though, I would be white instead of having the nice tan I have . .. I'd settle for being white!!!

I'm kind of behind on planning this coming week - honestly I haven't even looked at my planning calendar yet and it is Sunday night as I write this post.  Oops.  I feel a little like Monday will be my day to recover from last week - the heat, a holiday and an unplanned trip!
Posted by Jackie Koll at 8:00 AM No comments: