Sunday, February 3rd, was Superbowl Sunday.  As you know, if you follow this blog, we love Football in this house so not only is Superbowl Sunday a day of excitement, we are also sad because, well, Football is done until August :-(  Instead of sharing just a recipe today, I'm going to share are day and give some links for a couple of new recipes I tried out. 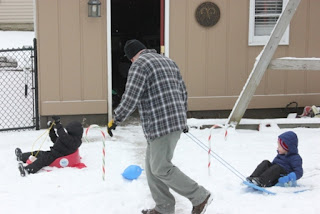 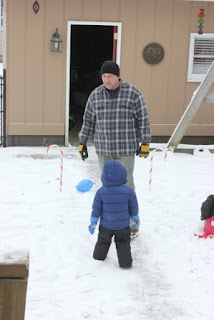 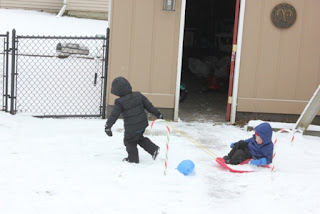 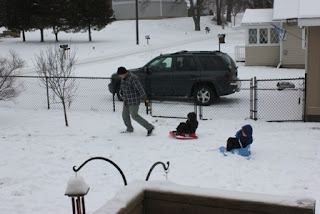 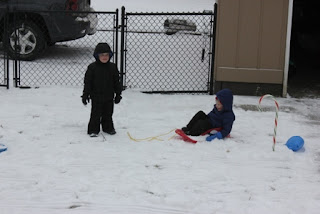 We actually got snow!  The first week in February brought quite a bit of snow - especially Thursday - Saturday.  So, on Sunday, when Darryl got home from work, the boys got dressed for the snow and they played outside for well over an hour.  Sledding, shoveling, and then, sliding.  Darryl would fill the slide with snow and the boys would "plow" down it.  HA!  When Darryl finally came in, Josh laid down on the deck, face down, and cried ;-)  He loves his daddy!  No, I didn't play in the snow . . .I haven't bought boots yet and plan to buy them this week which means we'll have no more snow until next year :-/ 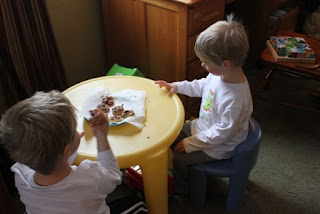 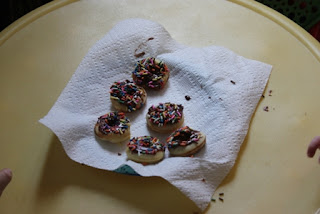 Once we convinced the Snow Angels to come inside, I had fresh, hot donuts waiting for them thanks to my Mini-Donut Maker.  They are awesome and the perfect size for little hands (and for popping the whole thing in your mouth if you want to!!)  It was a great afternoon treat.  I then snuggled in on the couch to watch all of the pregame stuff, as did Darryl.  Josh set up the Game Cube and he played Pac-man for most of the afternoon (Don't judge - he is only allowed to play when Darryl is home - most specifically on Sunday afternoons so we can relax and watch TV too!) Nate wondered from toy to toy and snuggled with me for awhile too.

Before Kick-Off, I set up all of our snacks. 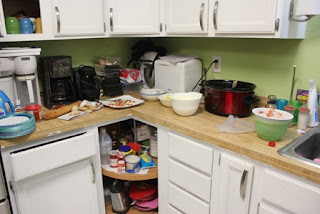 For this party, I made some old favorites like the Fruit Dip, Meatballs, and Shrimp Cocktail.  I will admit two things: 1) The meatballs overcooked.  My crock pots seems to cook really hot so I should have waited to put the meatballs in plus I tried a variation on my normal recipe and it wasn't as good.  2)The Shrimp Cocktail was lacking. . .the sauce was old (I should have checked it!) and the Shrimp, which was bought frozen was a little on the tasteless, mushy side.  I think I need to find somewhere to buy good, fresh shrimp for Shrimp Cocktail.   Then we tried two new recipes.  First up is something called "Texas Trash" or "Warm Bean Dip." 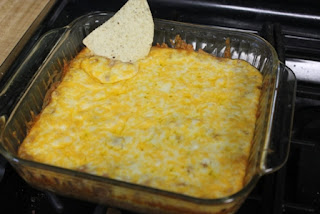 This recipe comes from Life as a Lofthouse and was probably the favorite of the night.  I have a cold bean dip/layered dip that we love but I wanted something different and this fit the bill.  It had great flavor and, would be even better if you threw some chopped lettuce, onions and black olives on your plate to make it more of a "nacho" style dip.Note: I did cut this recipe in half and made it in an 8 x 8 pan.

The second dip was Feta Dip. 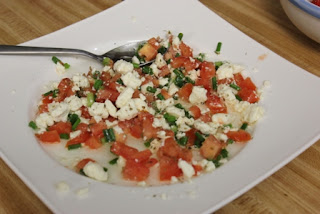 This recipe comes from Clover Lane and is super easy . It reminds me of a Bruschetta but with a greek flair thanks to the Feta Cheese.  I didn't really measure - instead I just took out a dinner plate since ours have the "sunken" center and just layered the ingredients inside that area based totally on my eye :-)  This ended up being the perfect amount for my husband and I - there was just a little left so it didn't get wasted.  This was also really good but you have to like Feta Cheese to like this :-)

The game was fantastic - it was the best kind of Superbowl because it went right down to the last few minutes of the game and there were some "desperate" plays at the end to make it even more fun to watch.  Plus the team I was cheering for actually won this year!

If those appetizers look appealing to you - just click on the links and you should find them!  (If not, let me know and I'll get them to you.)