St. Patrick's Day dawned bright and sunny!  We are having amazing, unseasonably warm weather right now.  We've already days of 80 degrees, yet it is just the middle of March.  The question is, will it stay this warm and only get warmer or will we get one more bought of winter?  We enjoyed a day at home; my husband worked but was home before 4:00 so we had lots of time to hang out before bedtime.

We've kinda run into a road block this week and I wanted to overcome it because the boys had special shirts to wear!  The road block?  Something called "Shirts with short sleeves".  Geesh, you would have thought I was asking them to run naked - I just wanted them to wear short sleeves but they have both refused telling me things like "That shirt is too small" or "That is just not right mama" HA  Even on a day that was over 80 last week - they were both in long sleeves, jeans, and had socks on!!!  So, I slipped shorts on them both - no big deal.  Then came the shirts . .. well, we compromised.  They wore the shirts but had to have jackets on . . they were insane!  I did tell them that they could not go outside unless the took the jackets off or they would get too hot.  Finally, the draw to play outside won and they took off the coats.  I'm hoping tomorrow we won't have to compromise :-)

Here are some fun photos from our day! 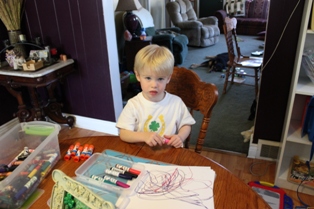 Nate and Josh both wanted to color, glue, and cut today so we got down all of the fun stuff.  They are both really good and generally only color on the paper. 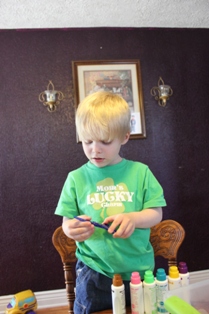 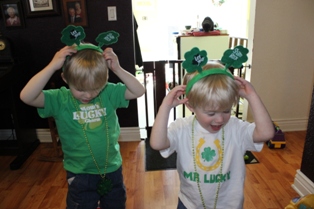 I got out our St. Patrick's Day stuff and they loved it.  The shirts I picked up last year but bought 1 size bigger so they could wear them two years in a row.  I'm glad I did.  Now, I'll keep them out for the summer for the boys to get all of the use out of them that they can.  The Shamrock blinking necklaces were fantastic and they "Ears" - well, they were hopping like bunnies all over HA!  One freaky moment - the Shamrocks were attached to the necklaces with a metal ring.  Nate managed to get his unwound . . .then I heard a blood curdling scream and found him standing with the metal piece coming out of his mouth.  At first glance, we thought it was in the roof of his mouth but, thankfully, he had managed to get it between his front two teeth right at the gum line so we were able to get it back out easily.  Yikes!  Not fun! He was running around mere seconds after we got it out though so he was fine. 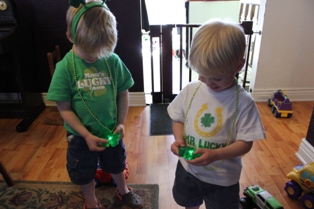 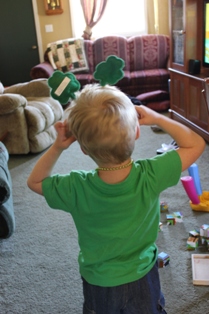 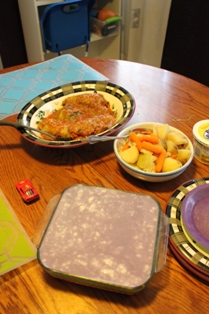 This year, we did not do Corned Beef (I did make it last year).  As I was thinking about what to make this year, the thought of Corned Beef literally make my stomach turn.  Instead I made Stuffed Cabbage rolls . .. .See, It had beef and cabbage . .. I told my husband I should have put corn in them and then I would have had "corned beef" HA!  The Cabbage Rolls are fantastic!  Then I took the rest of the cabbage and added it to potatoes and carrots in a roasting pan with Nature's Seasoning and chicken broth and cooked them at about 225 degrees for 4 hours - they were soooo good!  I also made the yummy rainbow salad (the only thing the boys ate HA!)  And, for dessert, we had "Shamrock Cups" (Vanilla Pudding with some green food coloring and they have a gold wrapped chocolate coin in the bottom!!) 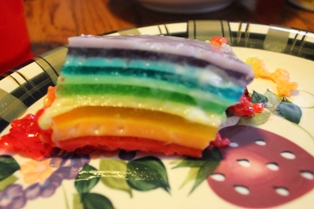 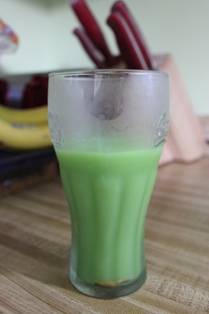 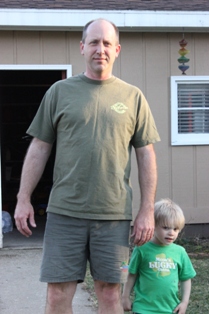 As soon as the boys were done eating they were back outside and were digging in the dirt.  I love the photos of the boys playing . . with dirty faces and hands! 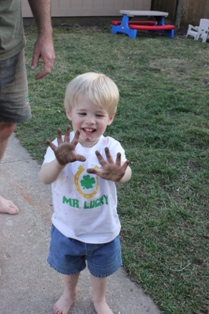 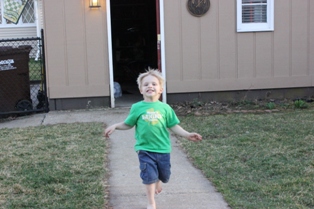 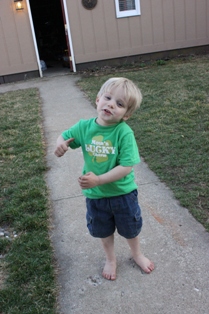