Merry Christmas from our Family to yours! 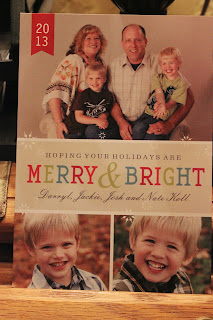 So here it is!  Our Christmas card :-)  I ordered from a new company this year, thanks to an groupon where I got a $70.00 package for $20.00.  I'm not going to share the company name because I found that their templates were NOT easy to use at all and, when I opened the envelope with my photo cards in it, I discovered, well, that they weren't mine.  I had someone elses cards which included their address, phone # and e-mail address on the confirmation!  (And mine had been shipped to someone else . . .).  The company made it all right but I won't order from them again!

Anyway - if you feel like reading, our Christmas letter is below!

Dear Family and Friends,
Hello!  For me personally, I always enjoy this time when I get to sit down and reflect on our past year in order to share just a little bit of our adventures with each of you.

Our Animals – China, our wonderful dog, is still doing great J  She is just as much of a couch potato as she has ever been but has also become quite the “guard” dog with the boys.  During the summer she is outside with them often, seemingly sleeping in the sun, but if someone approaches the yard, she puts on her “mean dog” face and lets them know they can’t enter the yard.  Nate especially loves her and often sits next to her on the couch, resting his hand on her back.  Misty is really showing her age but she still has spunk.  Sure, her jumping isn’t quite as high; her hearing isn’t quite as keen; but she still loves to snuggle in and stay warm!  It’s hard to believe she is about 18 years old.  We did lose one pet this past year – Stratocastor passed away not long after Christmas last year.  We noticed the day after Christmas that she was having trouble walking; we were trying to decide what to do when she made the decision for us, curled up and went to sleep forever.  We are thankful for that but I sure missed seeing her on the porch this summer, stretched out in the sun!

Our Kids – Josh and Nate are doing great.  We worked on homeschooling this year with Josh in K-4 and Nate in preschool.  Both boys enjoy learning and, more importantly, enjoy learning at home J  They also attended a weekly homeschool co-op where they were able to enjoy gym class as well as other learning classes.  We have moved on to bikes with training wheels this year – Josh and Nate both love their new bikes and their new freedom to ride in the drive-way.  Josh continues to entertain us with his stories, jokes, and take charge attitude (He often asks me if it is his time to be charge . .. ).  Nate continues to have that sweet spirit that coincides with his “all boy – not afraid of anything” attitude.  I’m his best buddy right now and I wouldn’t change that for anything!

Our Work – Darryl continues to drive a Taxi for Calder City Cab in Grand Rapids.  It is something he enjoys most of the time but does get a little stir crazy sometimes.  So far, God has not opened any other doors and has supplied for our needs through this job.  I am still helping a friend out and watching her children – ages 3 and 10 months.  We added a Girl to the mix with all of the boys as the 10 month old is . . well, a girl ;-)  My boys love her and would like her to live with us . .. except now she is ‘on the move’ and they really don’t like that at all!

Our “fun” – Darryl continues to play with the group “Alive” and has enjoyed that more this year despite his long hours at work that make it hard to stay awake during practice.  He also enjoys writing and recording his own music too.  Scrapbooking is still my main hobby and I had the opportunity to take a weekend away with friends to do just that in the fall.  It was a great get away and I got a lot done!!  I have also enjoyed singing in the Lakewood Choral Society again this year and am looking forward to an upcoming Christmas concert.

Our “Not so much fun” – As I write this Christmas letter, Darryl has been off of work for over 2 months.  At the end of September, after struggling with a very sore back, he ended up flat on his back due to a back injury.  After a trip to the ER, some awful pain meds, and an MRI he was sent to a Neurosurgeon to see what could be done.  It continued to get worse so he was sent for a CT scan as well where they found that the L4 and L5 Vertebrate had “tipped” and were severely irritating the nerves making walking very difficult and causing his legs to go numb.  During this time, he started dealing with stomach issues that turned into pain so severe that I had to take him to the ER again; after several tests it appears that he has gastritis and a possible ulcer.  Thankfully, a very, very plain, simple diet has helped that all heal and he is doing much better (and has lost 30 pounds!!).  We are still working on the back issues but, again, some good news is that it seems to be less painful and the numbness is not so severe.  Having Darryl home has been great – we’ve always joked that we wish he worked at home so we could always be together but, he is technically self-employed so we’ve had to really trust God to supply our needs, which He has done.  It hasn’t been a stress free 2 months by any means, but I can say that our faith is stronger J We are hopeful that he can slowly return to work over the next month and going to hold off on any surgery to see if it continues heal on its own otherwise surgery will have to happen at a later time.

Our Home – If you have read this letter through the years you know that I often have a “water” story.  Well, I don’t want to let you down!  This spring, this area experienced severe flooding – some of the worst that has been seen in a very long time.  All of our neighbors had water filled basements and ran sump pumps for weeks to get water out.  We did not J  We did end up with just one small “puddle” in a low area in the basement but I think that was from all of the neighbors adding water to a water logged ground.  We did have a “flood” of our own, though . .. our water softener broke and flooded our basement.  Not once, but twice.  Seriously.  Uuuggg!!!  After the second time, we replaced the old girl and put in a new system (Thanks to the Cullegan Man!) which, after almost 3 months, is finally working the way it should – the secretary knew my number because I called that office so many times!!

Our Vacation – This year we enjoyed a fantastic family vacation with the boys.  We decided to stick close to home and headed to Mackinaw City for a week.  The boys were beyond thrilled – we even made a countdown chain to hang so the boys could keep track of how many “sleeps” until we left.  I can’t even express in a letter how much fun the boys had but on the morning we were packing to leave the boys cried, ask to be left behind, requested that we take the pictures off the hotel walls to take home with us and we had to drive over the bridge one last time.  Even now, 6 months later, Josh will ask when we are going back because Mackinaw City is his favorite place.  Can you guess where we are going on vacation next summer??