This past weekend we had big plans.  Plans that had been on the calendar for months and months.  It was the weekend of Nate - the weekend to celebrate his birthday which is the 22nd.  But, we live where it snows and snow it did.  Friday night into Saturday followed by some freezing rain and well, all of our plans changed! 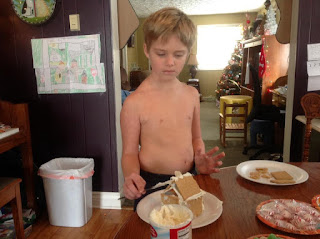 I found a great video tutorial on Facebook from The Penny Hoarder that showed how to make a gingerbread house for less than $5.00.  It was pretty close.  The base is a box of Gold Fish crackers (like a milk carton we all used to get in school) and then use Graham Crackers and Frosting to build the house.  I got most of the supplies at the dollar store so it was really in expensive. 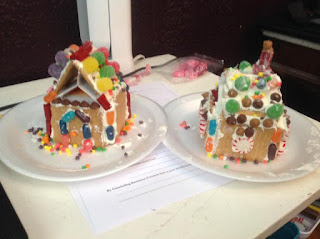 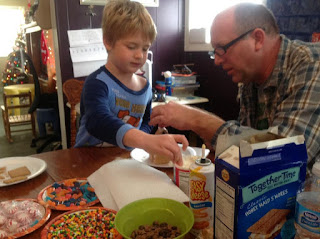 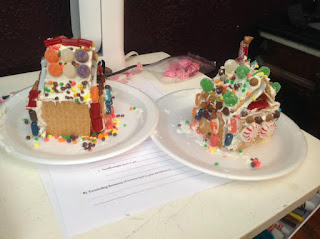 For first timers, their houses turned out great.  I learned a few things this year and I think next year will be even better.

We also had fun watching some movies.  I had recorded Frozen when it aired on one of the channels a few weeks ago so we watched that and then we watched Elf.  The boys laughed and, quite honestly, are so enthralled with Santa right now that they loved the whole premise.

Finally, the boys cut out and decorated cookies today.  This was also a first.  I did take photos but, considering that both boys were in underwear while doing it (they are crazy) I decided not to share HA!

So, even though our plans have been delayed - we still ended up with a great weekend with lots of Christmas fun.

Ironically, just this past week I was feeling like we've been too busy this year with other things to really enjoy the fun Christmas things.  Last year I really worked hard to "protect" our Christmas and made sure we enjoyed the season, this year I felt like we were pushing to get through the basics and that was it.  So this weekend was really a great, unexpected thing and it reminded me of the importance of stopping and just enjoying life as a family.

On a side note, Nate will still get his day - we will be celebrate this coming week :-)