It's summer and that means  . .Flies.  Every year I have about 5 flies that think they need to live with me.  I don't care if I kill one, there are always 5 and it drives me nuts.  I had seen an idea on Pinterest using this simple cleaning supply: 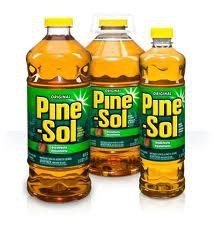 I decided it couldn't hurt to try and mixed up a spray bottle using half water and half Pine-Sol.  Now, I wipe down my counters and the dining room table using this mix and guess what?  It kinda works.  We  were eating dinner and there was a fly buzzing around yet it refused to land anywhere near the table.  I've also noticed that the flies are avoiding the kitchen.  Now, I guess I need to also clean every other room in the house with this cleaner too!

Sometimes I try new recipes that aren't really "recipes" but rather little things that go along with something else.  One of those was a Creamy Avacado Dressing from Krista's Kitchen. 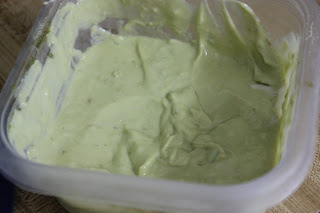 In the recipe, this dressing is meant for a salad but an idea on Pinterest was to use it on Taco's and that is why I made it.  It is pretty tasty - a little like a gourmet mayo (which sounds not so great with Taco's but it works!)  I've also used it to dip some fries in and also a cheesy breadstick!  I tend to use ranch dressing instead of ketchup and I think this is a great substitute for the Ranch.  Oh, I also used it in a Tuna Salad instead of Mayo and it was really good as well.

Another recipe I tried recently comes from Stilletos to Legos and is the "famous" Zero Calorie Slushy".  I think it should really say "Zero Point Slushy as far as Weight Watchers points. 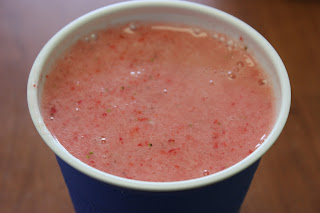 I altered the recipe a little because I thought two bananas was a bit much .  For a "healthy" ice cold drink, this was pretty good.  I will say that by the time I had about 1/4 left, I was done.  It got almost bitter - which the second banana might have helped with, actually.  I did not add any sweetener to it but I might try that next time.