We had a really fun week during our 19th week of school last week.  I will say that for the first time since school started, one of my kids "fought" with me every day about doing school but we got through each day and accomplished our tasks.  It wasn't always pretty and a few days I told him he was on his own since he was not listening to me but ultimately he learned what he needed to learn and did all of his work.  The boys are currently at my parents and I was informed on Friday that this particular child did NOT want to take any school work with him to Papa and Nana's, unlike last time.  This was fine since I hadn't planned to send work anyway :-)

On Monday of last week, I did not have the munchkin and princess as they were out of town so I decided that it was high time that we had a field trip.  The boys and I headed to town to have some fun.  We started by going to Kohl's to returned those ill fitting slippers they got for Christmas and pick up some new pillows plus the boys each picked out a $5.00 stuffed animal :-)  They had a blast each pushing their cart through the store.  Then, we went out to lunch at Red Robin before heading to Catch Air! 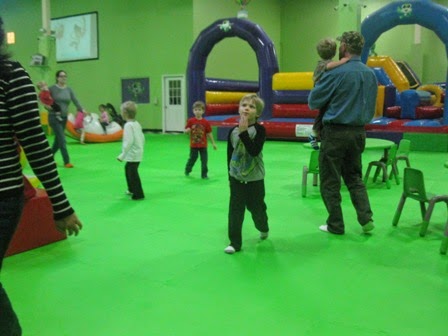 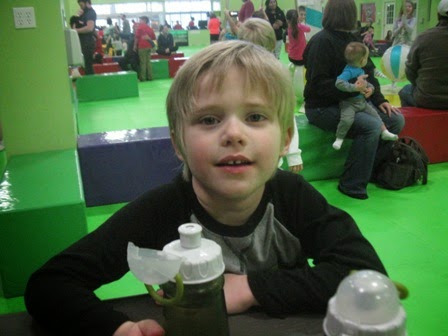 Josh - very hot and tired!  He had been running around forever! 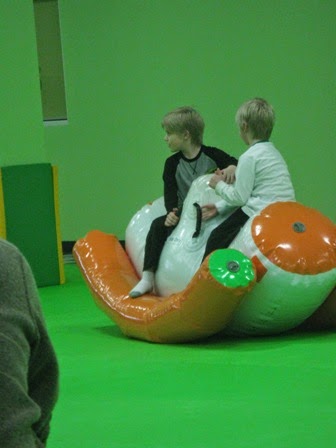 The boys one the big blow up teeter toter.  The boys played for almost three hours while I enjoyed my Kindle and watching them :-)  I finally convinced them to leave so that we could go to the mall for a bit since I promised they could play on the giant plastic food (and I wanted to go to Bath and Body Works to take advantage of a really good deal on hand soap AND get a coffee!)  So, we ended our day with a good 45 minutes playing on the food - they made a new friend, which they normally do anytime they play anywhere.  I think our first Field Trip was a huge success and I look forward to taking more in the future. 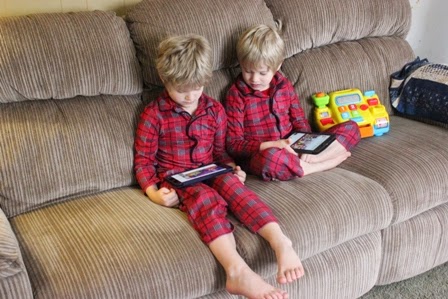 This is how we roll in the winter on cold days - nice warm (slightly too small) flannel PJ's HA!  They love sitting together on the couch watching Sponge Bob and playing Hay Day. 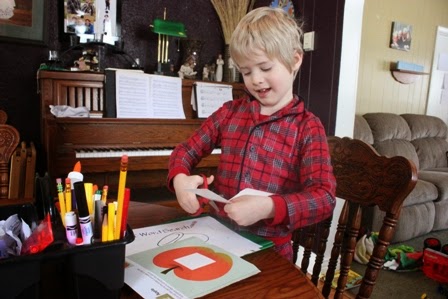 School is still fun, though.  Nate is working on a cutting book - lots of cutting and gluing practice which is very important in preschool! 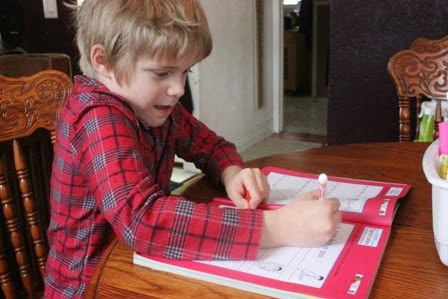 Josh is working on writing out sentences.  This, quite honestly, is not his thing and what we battled about several times.  He was very glad to get these pages done and move on to another skill. 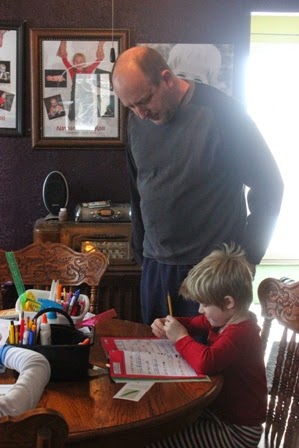 On Thursday, Darryl was home so he ended up helping Josh more (which is what Josh wanted - Josh and I were not seeing eye to eye on this date either!). I love that Josh can read all of these words on the page though and that he has no problem sounding out new words.  :-) 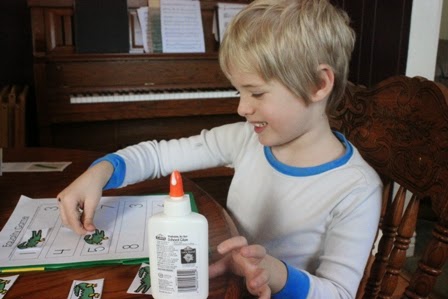 Nate worked on figuring out what number was bigger and than using a cut out of Alligators to point to the biggest number.  He had fun with this activity which I love seeing since at the beginning of the year, he cried so many days because of the work (I'm so glad we went "back" to preschool with him; best decision ever!) 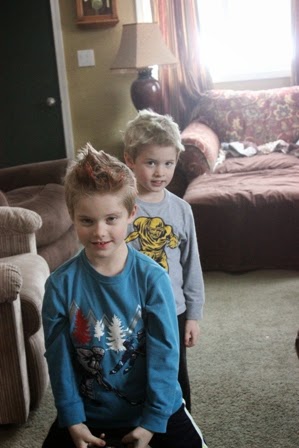 This is such a great photo HA!  Love those faces :-)  On Friday we took another "field trip".  I took all four kids and we went to get haircuts for Josh and Nate.  They were in desperate need of one!  They were supposed to get haircuts just before Christmas but due to the awful sickness, we had to post pone.  I finally got them in this past Friday and they look like new kids!  Then, after the haircuts, we went to get the oil changed on the truck which was a whole new learning experience :-)  Lots  and and Lots of questions!

All in all we had a really great week even with the little battles along the way - that's just part of school, right?
Posted by Jackie Koll at 7:00 AM No comments: