Christmas in the Koll House

This year, we will be celebrating Christmas with my entire family - all three of my brothers, my sisters-in-law and all of the nieces and nephews.  This gathering only happens once ever 3-5 years because one of my brothers is a missionary in Brazil and is only in the states that often.  With that going on next weekend, we decided that we would celebrate Christmas with the boys on Sunday, the 18th.

Our traditions begin on "Christmas Eve" so, after all of the birthday party things were put away, we brought out the boys special Christmas Eve gifts.  Each year we get them a new pair of PJ's and a fun toy. 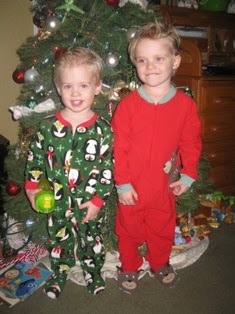 The boys in their new PJ's in front of the tree - it was after bath so they have some pretty slick hair going on.  Their special fun toy this year was a Cell Phone (a toy of course) but the phones are awesome.  Darryl and I can record messages to each of the boys in the phone and, when it sits for a moment after they close it, the phone rings.  It makes them SOOO excited to hear it ring. 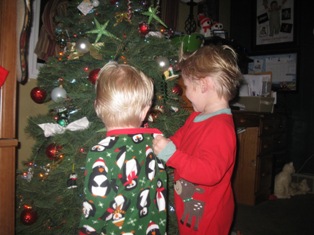 This is a tradition from my side of the family - growing up, my brothers and I always faced the tree and my mom took a "backwards" photo.  So, we worked to get the boys to face the tree - they thought I meant to SIT in the tree so they tried climbing in it HA! 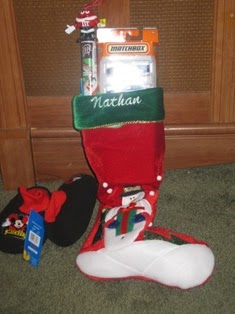 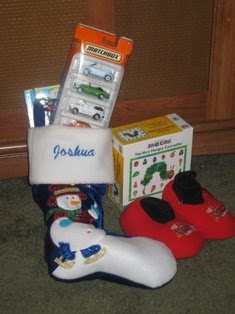 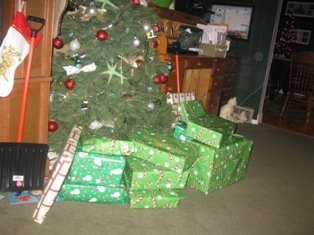 Once the boys went to bed, we finished wrapping some gifts and filled their stockings.  Everything was set out, ready for Christmas Morning! 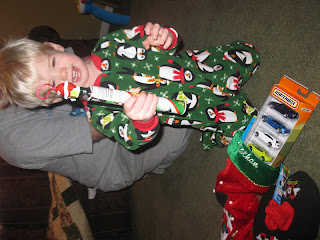 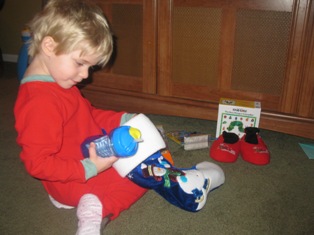 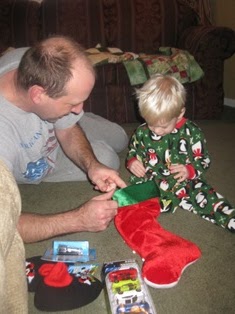 My boys are young enough that they don't wake up at 5:00 AM yet for Christmas - as a matter of fact, Josh woke up at 7:00 and came into our room.  We all snuggled in and watched cartoons until Nate got up at 8:00.  I even managed to sneak to the kitchen and get breakfast going.  Now, once Nate was up though, they noticed their stockings and I almost didn't get photos! I love "packing" stockings :-)  The boys got cars, slippers, flashlights, socks, new cups, and Josh got a puzzle while Nate got a book. 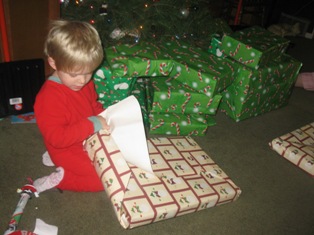 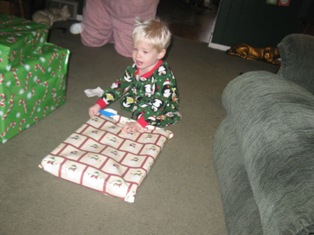 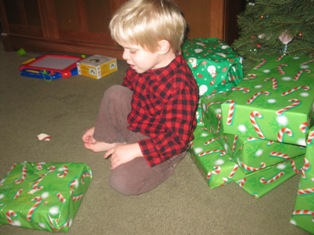 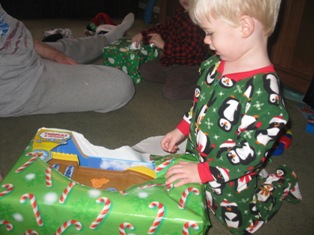 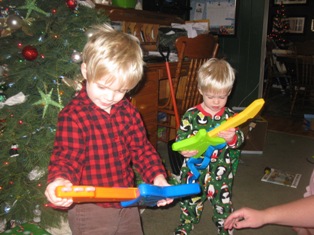 After we had breakfast (I am going to post our Christmas recipes on Friday - in my weekly recipe post!), we started with the gifts.  It was so much fun watching them - but we had to keep reminding them they had more!  They just wanted to play.  It was so much fun to see them interact with their new stuff and to see how they gravitated towards certain things - sometimes the things that weren't ever their gift. 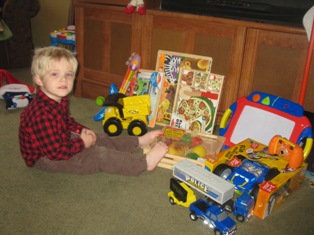 I saw this idea last year on a blog I follow - once we were done, I gathered all of their gifts, and had each boy get their photo with their gifts.  I think it will be fun to look back at this in future years and see how their interests change and grow.  What were the big hits with Josh?  The Melissa and Doug Pizza set and Cutting Food set.  He played with that stuff for hours.  I highly recommend those sets - they are really great.  He also loved the Sketch and Doodle thing.  Of course, the guitar was a favorite too.  I was kinda surprised that he didn't go after the camera more - he is always asking for mine and loves to take photos but he was not impressed (yet!)  Now Nate LOVED the camera and has already figured out how to play the games that are on it too. 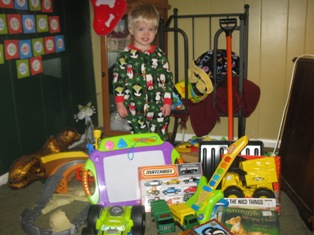 Here is Nate!  Nate loved the Sketch and Doodle as well as the guitar.  He also got a Pirate Thomas the Train set that is the Take and Play version .  Josh had gotten one for his birthday so we thought it would be nice for both to have a different "piece".  Now they can hook them together and play OR they can play by themselves with their own train set.  We got each of the boys a Bounce-Back-Racer.  Nate LOVED IT.  We are actually going to put those away and let Darryl play with the boys on the weekend with those until they really learn on to use them.  By the spring they will be ready to take them outside to play. 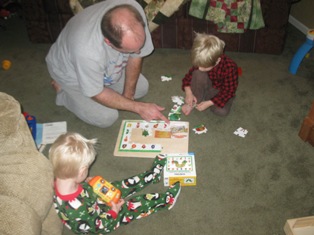 Once the gifts were opened, we just enjoyed the day.  The boys played with ONLY their new toys all day long and we played too!  Later in the afternoon, Josh got very interested in his new puzzles.  They are actually jigsaw puzzles.  Both Darryl and I worked with him on how to look at the pictures and then put the puzzle together.  (Notice Nate is playing with the camera??)
When I put the boys to bed tonight, I asked each of them "Did you have a fun Christmas?" And they both replied YES!!  Josh told me that he Loves Christmas because he gets presents and gets to play with Eat (Nate) and Daddy.  Isn't that the best???
We still have more "Christmas" to look forward to!  On Friday, we'll be gathering with Darryl's family at the nursing home to celebrate Christmas with his Grandma and then we'll be with my family on Saturday and Sunday.
I apoligize for slightly blurry photographs.  My camera seems to be going that direction.  I'm holding out for tax time so I can finally buy my nice camera :-)
﻿
Posted by Jackie Koll at 10:00 AM No comments: