Vacation - The Fort, The Beach, and the Great Outside Party

Our last full day of fun :-) As is our pattern, we all slept in, got breakfast, got ready and headed out. 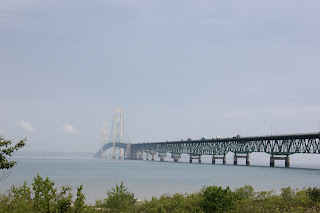 The Bridge.  Josh loves this thing!!  He and Nate would walk around chanting, "Mackinaw Bridge, Mackinaw City, Mackinaw Island" over and over again. 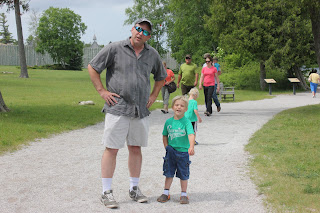 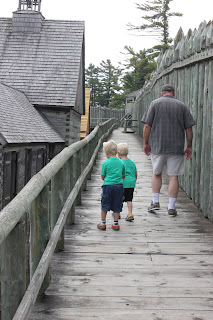 We went to the Fort in Mackinaw City and let Josh kinda take over the leading.  He was in his element to say the least.  He wanted to walk all around the fort first on the raised walk way.  Then we went through all of the buildings, one by one.  This is the one day we had rain during the day so we ended up sitting on a bench under an overhang for a little bit while the storm passed. 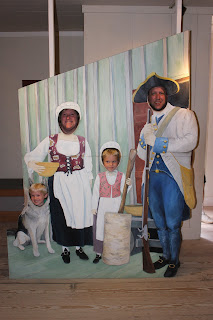 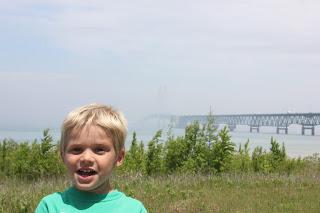 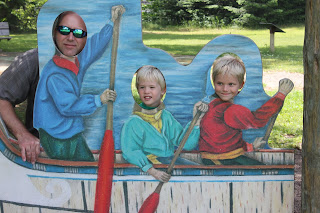 After we finished at the fort, we went back to our favorite restaurant and got the awesome fish again.  Then Josh asked if we could go across the bridge again and to the beach.  It wasn't our plan but he was so set on going over the bridge again we decided to do it.  We thanked him later for suggesting it because it was the perfect thing to do that afternoon.  We played on our "own" private beach for close to two hours and all got in the water.  The boys loved it because they could walk out a long way with us before it ever hit their belly's. 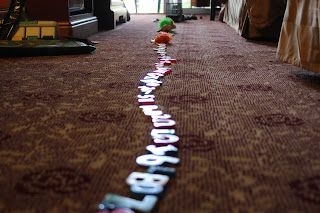 Back at the hotel they played "workers" again and set up this long chain of "barrels".  We loved watching the boys play together in the evenings. Tonight, we let them just stay up because they were playing so well. 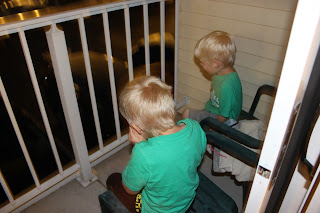 I ended up sitting out on our balcony with my Kindle enjoying the view and reading.  As it got later, Josh and Nate joined me and then we had "A Great Outside Party".  They brought out shoes to make a "campfire", we had marshmallows and Crackers that became S'mores, pillows for sleeping and more.  Josh kept raising his fists in the air and saying, "Mom, this is a great outside party".  Talk about fabulous memories.  They were enjoying the last few moments of outside time in the photo above before we all headed to bed since it was almost 11:00 :-)