Last Saturday we did something we haven't done in, well over a year.  What was it?  We planned a really fun day as the family that did not involve a doctor's appointment or x-ray appointment.  Instead, it was just some fun together. 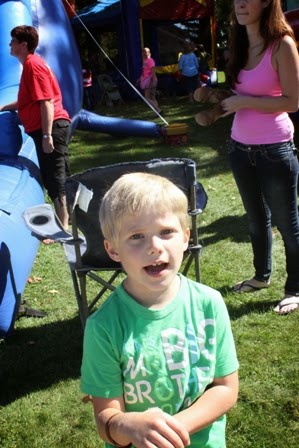 Our first stop was a local fall festival that I just happened to read about on Facebook.  One of the key draws was that there would be LOTS of bounce houses and that is something the boys love.  We were not disappointed.  We decided toe at lunch there too and, quite honestly, we had the best street tacos we've ever eaten.  I WISH I could have eaten more of them but, well, I couldn't HA!  I also got a Cider Slushy - talk about near perfection!  So, it just so happened that Saturday was 80 degrees so we also had to deal with . . .BEES!  Uuugg!  They were literally swarming the food trucks and then followed us with our food.  Nothing like fighting a bunch of bees for your tacos! 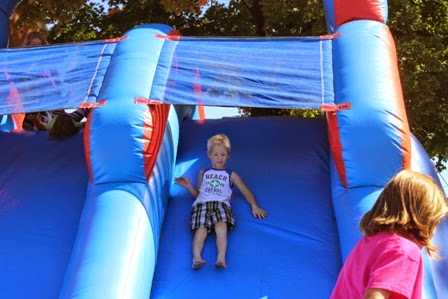 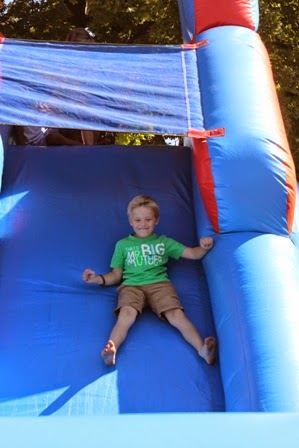 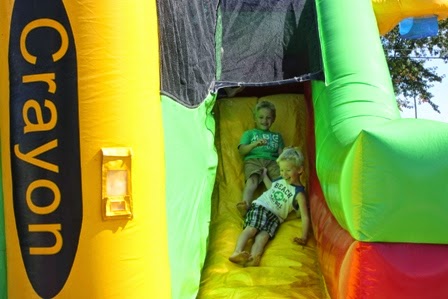 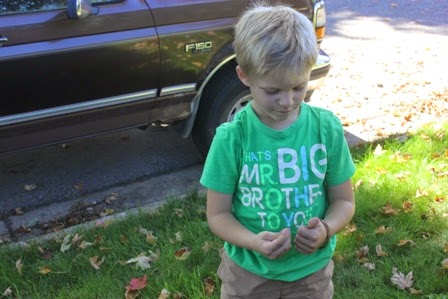 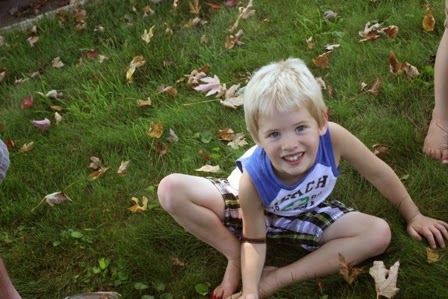 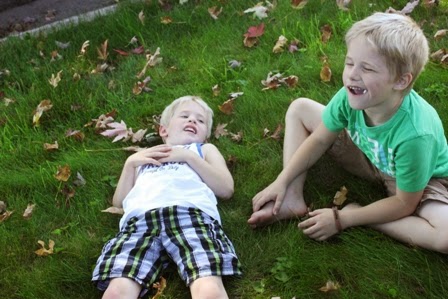 We had to take a break in the shade - those houses are HOT and the boys were bouncing like crazy! 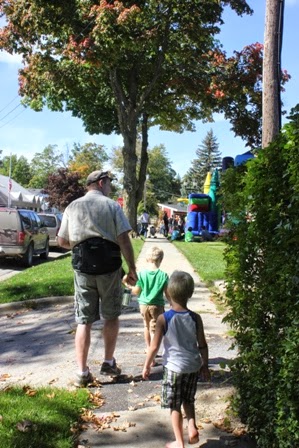 I love my boys and love seeing them all hiking down the sidewalk! 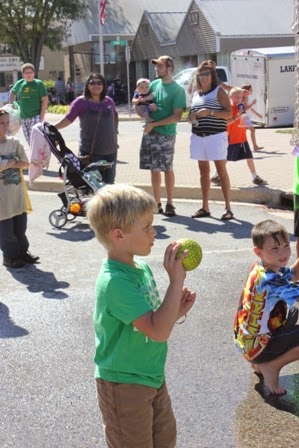 Josh saw a dunk tank and really wanted to try it out.  He looked so cute standing there.  No, he didn't get a dunk but give him a year and I think he will (He's very excited about T-Ball in the spring!) 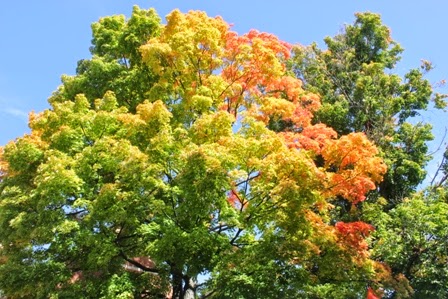 Despite the bees, it really was a beautiful day.  Once we left the fair, we stopped at McDonald's (Josh's suggestion) to use the rest room and get something to drink.  The one we stopped at did not have the A/C on so it was HOT and we had to wait 20 minutes for Nate's lunch (Chicken and Fries of Course) since he didn't eat anything at the fair.  Holy cow!  It was just crazy but we all enjoyed a nice cold drink after being outside for a few hours. 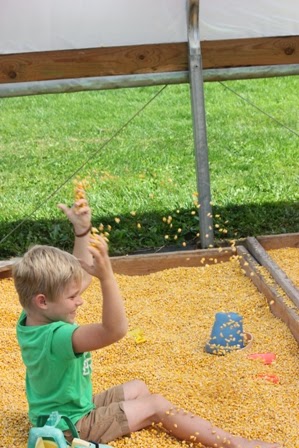 We took the back roads from the fair to the local farmstand where we have enjoyed fun fall activities in the past.  The colors are just changing around here so we got to see some beautiful trees.  The first place the boys played was the big "Corn Box".  It's actually a great idea and lot easier to clean up than sand! 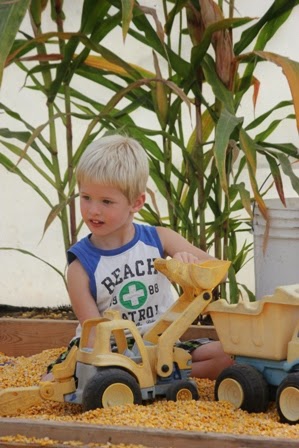 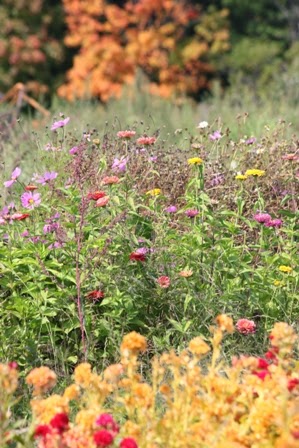 I loved all of the rows of flowers - this is just one shot I got.  I think I want to print and frame some of these for my kitchen!!! (Or some room in my house!) 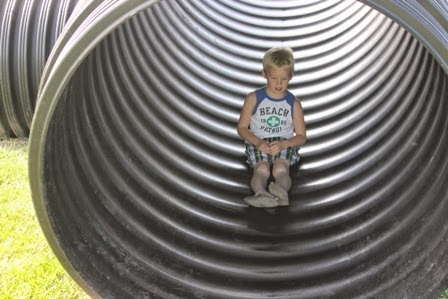 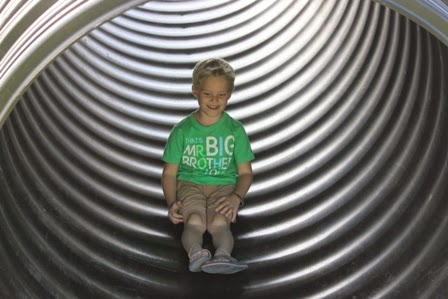 There is also a big slide made out of huge tubing.  It's fun to listen to the boys as they slide down the bumps. 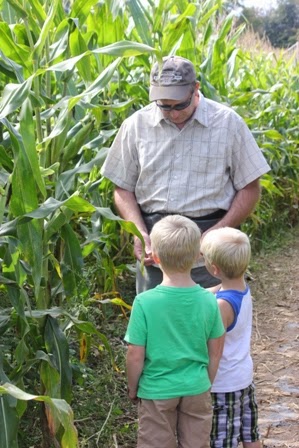 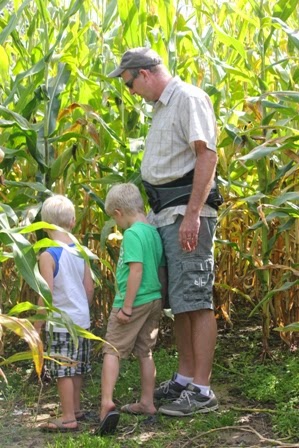 We then went through the corn maze.  This was a first for the boys to really enjoy.  They LOVED looking for corn on the ground until I told them that three ears was enough HA!  Then they got the idea of trying to find our way out.  Nate loved being the leader; he and I would go one way and Darryl and Josh another but it wouldn't take Josh long to "need to find mom and Nate".  We did finally find our way out (obviously) but only because Darryl was tall enough to see the Flag!! 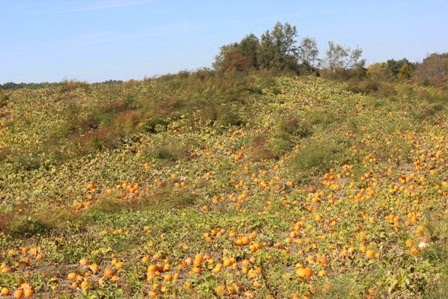 As we were walking back from the maze the boys saw a Hayride and wanted to go.  Darryl decided he should sit this one out and, let me tell you, it was a good thing!  It was by far the best Hayride ever thanks to one awesome driver who had fun going down the big hills.  We were all screaming just a little bit!  We had fun looking for the scarecrows that were hidden along the ride and got to see fields and fields of pumpkins.  No, we did not buy pumpkins yet - we have two growing in our garden.  We told the boys we were wait a few more weeks and, if they don't get orange(r) then we would come back and pick out a few (Who are we kidding - we will probably still go back and pick out a few!)

We ended our fun time with Cider and Donuts.  Yummy!  We sat at a picnic table and enjoyed it right there and then let the boys play in the corn box a little longer.