On Tuesday we started our second round of 6 weeks of school but this time Nate and the munchkin started class with Josh too.  It did not go off without a hitch - I figured some things out very quickly on Tuesday that would and would not work and made the needed changes on Wednesday.  We also ended up with a very "short" week.  Thursday the Water Softener guys showed up just moments before we were going to start class and that took all focus for the boys.  I didn't push it because I knew that their attention would be elsewhere. 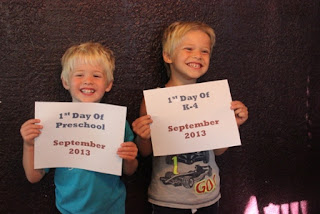 I was totally lame when Josh started class back in June and never took a "first day" photo so we did that on Tuesday. 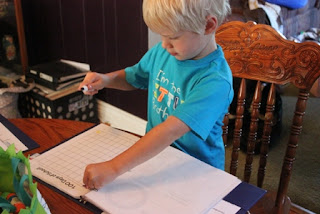 We started the day with our notebooks.  I was about ready to claw my eyes out by the time we got through each section and knew that we could not start the day with these ever again HA!  Wow.  By the time we finished our morning things like the Pledge, our verse and calendar plus did the Notebooks we had already been doing school for an hour and I had lost the two younger ones.  There may or may not have been one of us in tears but I'll never tell who ;-)  Oh, and have you ever tried to say the Pledge of Allegiance one word at a time?  Not so easy - I need it written out from now on!!! 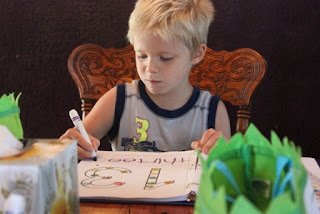 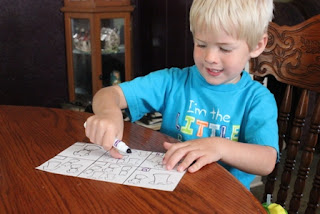 Now that all three boys are in school we have started our Bible Lessons.  I picked up More! Instant Bible Lessons for Preschoolers; God Helps Me from the Christian Book Store and I am very happy with it already.  It is simple and has great activities that allow us to review the story over 4-7 days before moving on to something else. 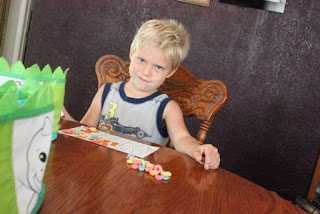 We even used Fruit Loops as counters and that was a big hit. 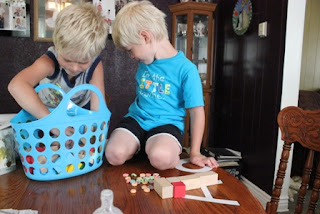 Once Bible was done, we worked on our daily work.  The little's got to use blocks to build on top of an A.  Josh thought it was pretty cool so he made his own A so he could use blocks too.  This taught me another lesson.  Josh wants to do what the others are doing so by the second day I had copies for him to do of many of the same pages he could do after he finished his work.  That made for a much happier boy. 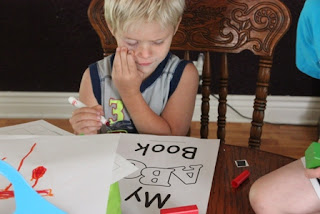 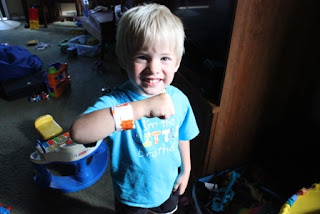 All three boys made great bracelets to wear with the basics that they were working on this week. 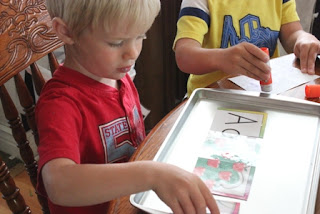 The magnificant $1.00 magnetic cookie sheets were well loved this week for puzzles and games. 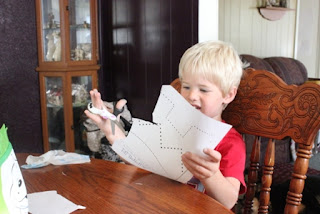 Lots of cutting practice and no one cut off any fingers :-) 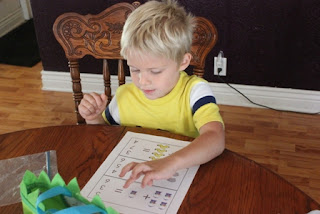 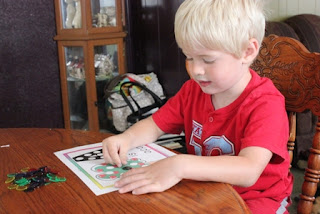 We used clear plastic counting pieces for fine motor control by placing them on the dots on the paper. 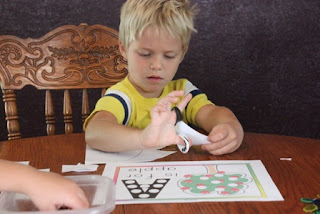 This week we also started Friday School.  The boys were so excited and did really well in their classes. 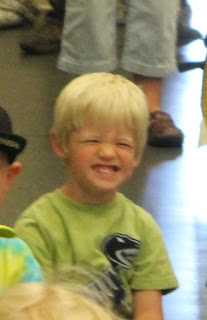 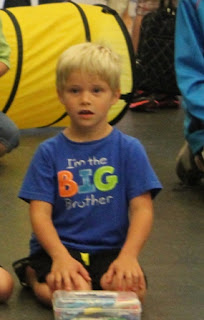 I did not get great photos at Friday School - between things I had to get done for the board, carrying a baby around for awhile, and just the crazy first day stuff - well, this is as good as it gets.  I hope to maybe get some better photos next week.

As I mentioned earlier, I quickly learned that doing the daily notebook first was not going to work so on Tuesday, the very first thing we did was Bible.  Then we practiced our verse, did our basic calendar things and then got right to work on daily work.  It went 100% better.  Later in the day the boys asked to do their notebooks and I just let them do what they wanted in them.  I'm kinda giving the notebook concept a week or so break and then I will bring them back in the afternoon as part of our activity later in the day and see how that works.

Other than Bible, the rest of our curriculum comes from Confessions of a Homeschooler.